Myrtle has learned to open doors.

This is what I woke up to this morning:

After I learned of her affinity for shredding TP, I started keeping my roll on the shelf by the commode, out of her reach.

When she started acting out by peeing in my tub/shower, I moved her cat box to the utility room and began closing the bathroom all. the. time.

So, when I saw this scene this morning, my first thought was to check the shower for her golden gift.

There was none!  Just this: 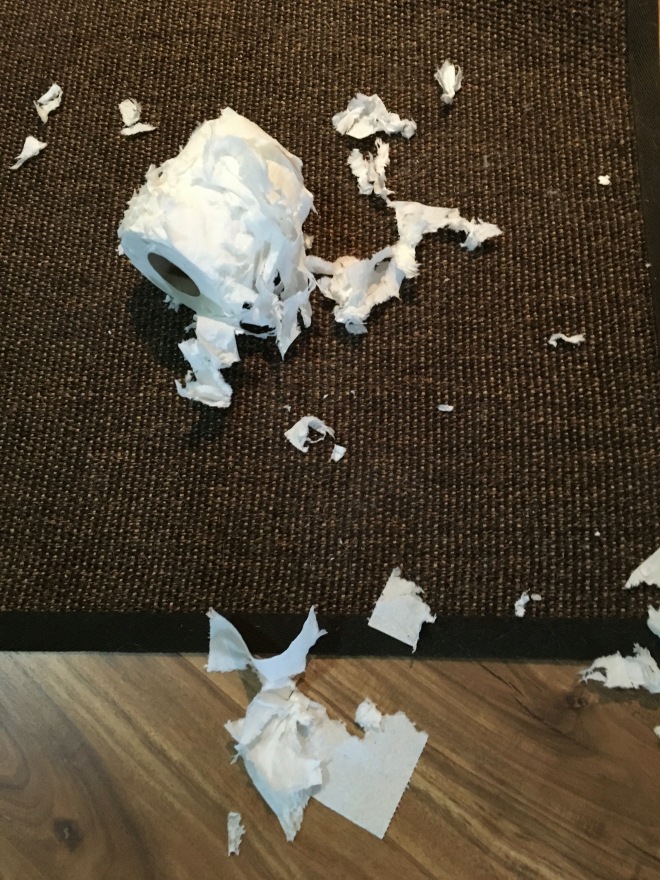 What in the serious fuck does she have against TP?

I accept that I will never truly know what her grudge against crapping paper is.  I also admit personifying this poor roll and empathizing with its final moments as she shredded it.  My hands and arms sting in solidarity for its suffering.

Then again, when you’re a roll of TP, you probably accept that your fate is pretty shitty and that after you are removed from you well-lit perch on a Target shelf, it’s all downhill.

To paraphrase the best selling work of fiction in human history, “Pride goeth before a flush”.

and use body weight momentum to push the door open, I’d like to share a second story about Myrtle’s new-found skill.  It’s definitely more of a head scratcher.

After I moved Mistress Myrtle’s litter box into the utility room, I monitored the usage closely.

All was well in Myrtle’s cat box kingdom.

I had out maneuvered my cat.

That feeling of accomplishment lasted a week.

Then she took her show on the road.  Well, to the hallway.  To my new hallway runner, placed inside my entry hall.  Running from the front door to just past my bedroom door.

The rug was kind of an inadvertent win, Myrtle immediately made her joy at the jute texture apparent and would spend a lot of time scratching at it and rolling round on the hallway between my bedroom and the bathroom.  The win here being that she was no longer doing this on the underside of my bed at 4:00 AM.

The downside was that after a week she decided that the entry door end of the runner was her auxiliary pissoir.

Not that there was anything wrong with her litter box.  She was still using that as her crapatorium.

We had a couple of discussions about this over the following week.  At the end of the week, I stopped by Mud Bay and picked up some enzymatic cleanser designed to completely remove the trace of urine and help redirect her stream.

Until the morning that I woke up at 4:00 AM because I had to pee.  Not unusual for my bladder.

I discovered upon sitting up in bed that what had probably triggered my bladder this particular morning was the subliminal trigger that makes people yawn when they witness someone else yawning.

As I crossed from the bedroom toward the bathroom, I realized I was disturbing Myrtle’s zen piss moment.

I, unfortunately for Myrtle, did not share her equanimity on the topic.

Sadly, my efforts to call a meeting to discuss the issue were fruitless.  Myrtle dodged my invitations like I was a Greenpeace signature gatherer on s downtown street corner.  Shrewdly, I had closed my bedroom door while she effectively “shook” at the tail end of her piss, eliminating her favorite and most effective hiding place: under my (her) bed.

After about a mile of pursuit between the barstool-bookshelf-couch-chair-dining table circuit, Myrtle made the tactical error of hiding in the utility room, in the furthest corner behind the stackable washer-dryer and the metal shelving.

Hunkered down, she looked up at me with a grim satisfaction that I mirrored moments later as I put her water bowl down, started a load of wash and pulled the door closed saying “You’ve pissed your last rug” in my best Jack Nicholson.

I shut my bedroom door and tucked myself back into bed, pulling the pillow over my ear to shut out the piteous meows and frantic scratching coming from the utility room.

Not my proudest adult moment.

Also, I’d forgotten I had to pee, but squeezed my eyes shut and willed myself back to sleep.  I failed for the first half hour, but bargained with myself that I’d get up and release Myrtle from her time out after an hour.

I had to change the wash, anyway.

Then I fell asleep for four hours.

I felt nice and rested after my slumber.  A feeling that quickly faded to me feeling like Dick Cheney when I remembered Myrtle’s exile.  Well, if Dick Cheney possessed the soul necessary to feel bad for the evil things he’s done.

I get up, open my bedroom door and head toward the utility room to release Myrtle.

Passing Myrtle sitting in a barstool giving me her best Sphinx impression that faded to an innocent “What?” once she registered my surprise.

What the fucking fuck?!?

I still can’t figure out how that worked.  My first thought was that she clawed her way through, but there the door sat, undamaged and hanging open into the utility room.

I can see the luck lining up for the physics to work in crafty Myrtle’s favor when hanging off a door lever of a door that opens away from her.  Pretty easy to get my mind around.

But reversing that scenario to a door that opens inward?

As I stared at the open door, eyes wide and mouth hanging open, the only conceivable explanation that came to my mind?

First the pyramids.  Now this.