Well, ain’t this just a corker?  I’m going to go with the spirit of the season – very un-E.O.G. of me – and say it’s the thought that counts.

I swear that I’ve bumped my head and assure you I’ll recover and return to my jaded bitter old self.

Somewhere around Thanksgiving weekend I saw this notion on the Facebook and thought, “Meh.  Why not?”

You see, a friend of mine posted this status update suggesting we generate some holiday cheer by sending a bottle of wine to a stranger.  Sign up here, folks.

This both resonated with me as a good way to shake off a bit of the terrible-ness of 2016 and also with my basic American drunk gene.  Plus, I’m always challenging myself and those around me as to whether a situation is part of the solution or part of the problem.  This seemed like it had the potential to be the former.

I also happened to happen upon this proposal the evening after the case sale pick up at AniChe while I was putting my two and a half cases of wine into the wine racks that the Silver Fox had downstreamed my way.

Not that I was planning to part with any of these recent treasures.  Hehe.

I throw my hat into the fray with a comment in the affirmative and a few days later get instructions via the Instant Messenger.  Copy and paste the original post onto my page.  Send a bottle to the first person listed in the instructions.  The second person listed is the friend who’s page I’d signed up with.

When my friends sign up on my post, send the same instruction message out after moving my friend’s name up to number 1 and replacing her at number 2 with my own name and address.

In a bonus twist of fate, the person I’m sending my bottle to lives in Long Beach, CA – where I just happen to have lived myself for about half of my life.  Actually, I’ve been saying that for about a decade, so it’s probably time to rework that math.  “Forty percent of my life” just doesn’t have the same ring to it.

Working at PDX, it’s super simple to get a nice Oregon made wine into the mail since I pass three Made In Oregon stores about a half dozen times a day.

Still, I managed to procrastinate and not get it out for five days.  Go Galby!

Sidebar:  I’m writing this at my local coffee shop – Nossa Familia – outside because the four stool bar was surprisingly occupied on Christmas Eve by a couple writing out Christmas cards, an old woman and her dog.  It’s 37 degrees.  But warming up as a strapping young man just eyeballed me as he walked by with a bouquet of flowers.  He got a cup of coffee and sat down across from me outside.  Then he looked at me, reached into his pocket and pulled out a flip phone.  Flashback to The Jailbird.

Buddy, you’ve got flowers in your hand…I’m thinking you don’t need to be flirting with old charmers like me with unconsciously natural good game.  Can’t blame him, though.  Just look at me. 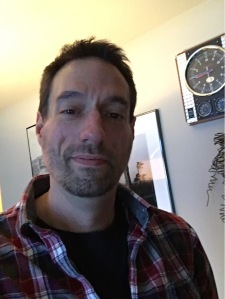 Ok, yeah.  Back to reality.

A few days later I start getting friends – of my nine that raised their hands – backing out.  “Don’t hate me, but…” and it’s all good.  Some people didn’t want to post on their Facebook walls in that manner, another just too busy, a third that discovered that you couldn’t legally mail booze into the state she lives in.  I’m still planning to break that law, just for fun…like jaywalking  She still sent out a bottle, though!  She trucked on over to the BevMo! website and ordered a bottle for delivery.  She was surprised at how expensive it was to ship wine.  Mine wasn’t that bad, so I think BevMo! just makes money where they can exploit their customers, but: ‘Murica!

My favorite?  Rib’s mom, who thought I was just asking my friends who wanted me to mail them a bottle of wine sends me her address.  Well, not her address, but the address she has been spending a lot of time at since she retired last year.  I love her.  Yeah, I might still send her a bottle.

But like I said, it’a all good and it’s the thought that counts.  So if people don’t or can’t go for it, I’m in no way injured.

A couple of weeks pass and no wine.  I’ve gone from checking my PO Box daily and compulsively back to the regular once a week or so because I really don’t care.

Plus, it’s wine pick up weekend again and The Fox and LB and 2.0 and I are all going up to Hood River again.  An outing I truly enjoy.  The Fox has – with absolutely zero effort – managed to convince me that I need to buy four bottles of a $50 red that is wine club members only.  Just by saying, “Oh, additional bottles are 30% off and my regular wine club bottles were only 20% off?!?”  Well, he ordered a few more and I coat-tailed my four and we discovered when we got there that once he added the extra bottles that they were all 30% off.  We also discovered that they really didn’t open for the wine club event until 6:30, so we went to Marchesi Vineyards and had a couple of glasses of wine while we killed time.  And I bought another four bottles of their fantastic Nebbiolo as well as their Bric blend.  Merry Christmas to (me) us!

So, still no bottles in my lonely little PO Box, but I’m still somehow up 37 bottles of wine during the timeframe I expected to be hauling bottles back from the Post Office to my place a couple blocks away.  I asked my friend, the OP and initiator of this little chain letter experiment if she has received any wine and she said about six bottles.  Not bad.  Good for her, but I also recall my friend from Kentucky – who couldn’t have wine shipped to her but played anyway – telling me that the bottle she sent to the OP was returned as unpicked up.

Yesterday, I visited my PO Box one more time before Christmas, just to see.  No wine, but I did have a card saying that a BevMo! had been delivered and was waiting for me to pick it up…at another location.  It would be there until 12/22 and then be returned.

But, it’s the thought that counts and at least one person had followed through.

Now I’m wondering if some crafty BevMo! executive started this whole thing.  See?  The E.O.G. is returning!  Seriously, though…their company was called out directly in the instructions.  It appeared as a helpful tip, and I almost removed it from my instructions because I wanted people to really work and invest in their endeavors to send a bottle of joy to a stranger.  Because actions speak louder than words…but I’m not entirely sure where that puts it in relationship to the value of a thought.  In the end, I left it in.  And here’s the thing, according to my friend in KY said it cost a ton to mail through BevMo! which indicated to me that there was a premium charge involved.  Of the nine bottles I know of that were sent, two were sent at this higher premium through BevMo! and never picked up, meaning BevMo! got paid for nothing, basically, since they got the product back and surely didn’t refund the shipping charges…

Oh well, it’s the thought that counts, and I probably have too much wine anyway!

Love, pizza and a nice, hearty red to you all!  Merry Christmas.