Ok…I’m back to publishing on Friday.  No idea how that happened.

I’m sitting at Yur’s with a beer, waiting for Linda Belcher to get off work nearby.  We are seriously overdue for a catch up sesh and Happy Hour seemed like the obvious fix.  This is also the last final for her husband, who attends school at OCOM, where I get my acupuncture.  We’re going to meander his way later so he can join us for a celebratory drink in Old Town.

The last time these planets aligned, we met for HH and closed the place…so, I’m maybe trying to get a jump on that shit show potential.

All that delicious Crux beer still chilling on the top shelf there.  The victim of my self-imposed Dry Week.

I called the week Sunday morning.  Seven days, no booze.  I’d say I made it through…even though it’s only Friday and last night, this happened. 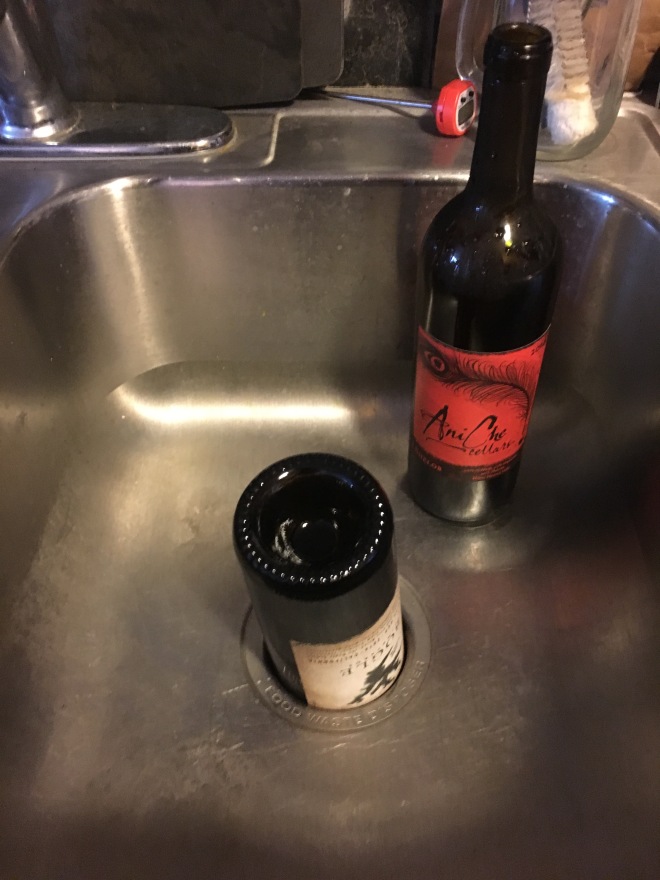 But, I called an audible midweek.  It seemed like a recipe for disaster to end my Dry Week on a Saturday night, since I typically work at 5 am on Sundays.  In order to enjoy some quality time celebrating my success, my audible was to end the week Thursday – my Friday – and chill with The Silver Fox, some wine (a bottle per) and a few episodes of our current binge: The Night Manager.

Which is basically my way of saying that I only consumed one bottle of wine this past week.

Fine.  Call it a Moist Week.

I’d say that the week was high quality, overall.  Aside from The Fox inadvertently telling me who died on How to Get Away With Murder, there were big strides in all realms of Xtopher.

Since we are on the topic of booze, let me fill you in on the rest of my diet.  I took lunch to work two of the four days in my short week, the other two days having business lunches with our visiting Regional Director.  Salads, I swear.  Fine, one was salad and the other one was chicken tenders.  I cooked at home every night but Sunday.  It was pretty nice, actually, to create something in the kitchen for just me…and, I ate leftovers!

I drank plenty of water and threw in a few kombucha to replace some of my soda consumption.

All this good diet mojo pairs nicely with my exercise for the week.  I had five – count ’em – FIVE cardio sessions this week with an average calorie burn in the really high 700s.  All but one was 800+, actually, so I would say that I burned off 4000 calories in cardio this week.  After acupuncture, I decided to go back to lifting as a part of my workout, too, but I’m approaching this addition cautiously to avoid aggravating any lingering injuries.

And being sure to stretch much more.  I’ll tell you, getting back to core strengthening had the surprise benefit of giving my back a really good stretch.  I’ve been feeling that it could use a good popping, but haven’t been able to make that happen.  When I was at the gym today, I was resting between sets of crunches on one of those balls and just let myself relax back over it.  Man…that stretch felt so incredible!  I’ve been resisting getting a new one at home, because:  Myrtle.  I may need to risk it.  My back felt freaking amazing!

Even work – which is still pretty damned great, even when frustrations occur – was good to me this past week.  I wouldn’t say that I completed a bunch of tasks, but made good progress on several.  I finished up one stockroom organizational project, all that’s left is to teach everyone the go-forward expectations in order to keep it running.  I made significant headway on another project, and amprobably at a point where very little remains to be done on my end.  Now it’s just waiting for the other players to come on line before moving any further forward.

I feel pretty neutral about some good turnover I executed.  Firing someone isn’t my favorite thing, but good turnover helps the team in the long term so I leave my personal feelings aside.  I generalize these situations by saying that employees fire themselves.  It’s true, too…and if I can’t say that, then I haven’t met my responsibility to their development in order for them to succeed.  Sure enough, in this instance, the employee sat down and basically said, “I’m fired, right?”

So, with less anxiety about unfinished business at work, less drinking and more exercise…I slept pretty damned well all week, too.  I think there’s a trend to protect here.

That said, let’s talk goals for the week ahead:

I’m gonna keep on taking my lunch to work and getting my cardio in afterward this week.

I’m gonna lift twice this week.  I need to decide if I want to do full body workouts early and late in the week or divide my muscle groups up like I did this week.  I’m leaning toward the former.

I’m gonna resist drinking during the work week again and make dinner at home each night.

Next week puts me at roughly the 20% mark on this Fitfy journey.  I feel good.  I am losing some fat and gaining some tone.  I’m not at a point where I feel good about my physical self, but I’m not experiencing the same level of negativity toward myself that I was at the outset.

I still want to lose at least five more pounds.  Even that wouldn’t get me onto the right side of 180, but I’m not attaching my success to a specific number.  I imagine that I’ll lose ten pounds of fat but my lean mass will net up in the process.  In order to keep my inwardly directed self-hatred in check, I’m really striving just to remain cognizant of that fact.  Whatever the number ends up being is secondary to how I end up feeling at the end of this year.

So, that’s a wrap on week nine.

It would have been super awesome if I had hit “publish” on this last night.  Linda Belcher showed up and I got distracted.