It wasn’t cloudy, it was ash.

As I’m sure everyone has heard, over the Labor Day weekend, some jag of a 15 y/o firebug was out lighting firecrackers in the Columbia Gorge and started a forest fire, turning this 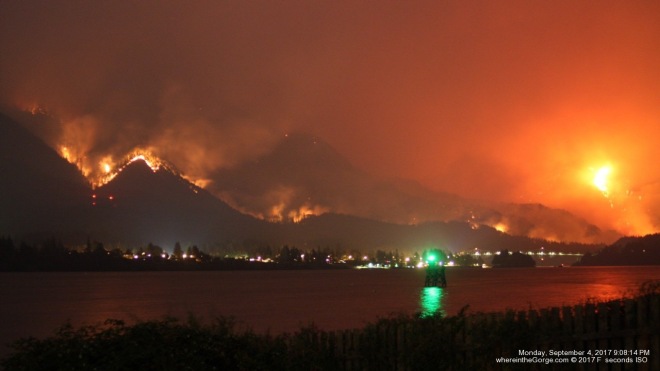 Oregonians are tearing up when they talk about it.  It’s palpably changed our collective mood.

Too many of us are carrying inhalers as our normally mist-filled September horizons are now hazy with smoke.  Instead of anticipatory pumpkin spiced latte talk and a slightly dreary post summer drizzle marking the onset of the fall season, we’ve got ash raining from the sky and conversation that is reminiscent of the last time it rained ash in Portland in the days following May 18, 1980.

At least Mount St Helen was a natural disaster.

This kid, though.  I’d bet he’s more of a nurtural disaster.

When you hear Oregonians discuss him, there’s not a note of empathy to be found in their conversation, its tone nor even inadvertently in their body language.

It’s an open and shut case.

You were proud enough – the rest of us gratefully call it stupid enough – to have a friend film it.

What none of them realized – surely because of their lack of life experience as much as underutilized intellect – is how cherished our nature is in the PNW.  Not to get into trouble with the Indigenous People of America, but more than anywhere else I have lived, the people of the Pacific Northwest have a connection to this land they inhabit.

I remember Sarah Jessica Parker – I know!  Where the fuck can this be heading? – saying in an interview once that NYC was the fifth star of Sex and the City.  Well, in the PNW, we are all the co-stars to the nature that surrounds us.

So, before he’s even charged, he’s been convicted in the hearts of Oregonians, if I could presume to speak for my people.

I guess I’m on to the sentencing phase in my mind…and I want the punishment to fit the crime.

If you were really doing this just to impress girls, my knee-jerk reaction is chemical castration.  It takes care of the punishment and is also prophylactically prudent – safeguarding future forests against any future humans he might be responsible for raising and releasing into the population.

Or, just to be tricky and humane…life in prison.

I imagine the reflexive objection of his parents as I – as judge in his trial – lay out his sentencing options.

I offer them a sort of Sophie’s Choice, would you take his place to spare him?

Should this ever come to pass – and fully admitting that outside of any knowledge of these parents, I’m using my post-Trump-election disdain for generic Americans as my guide – I expect nervous and uncertain glances to be shared between the parents.

Nervous, uncertain and hopeful glances: dubiously hopeful that the other steps up.

With a side of the expectant stare of their son as he waits to see which of his parents sacrifices their freedom for his…because he surely has an entirely undeserved sense of entitlement.

I hammer down my gavel as they shamefully and selfishly shake their heads, choosing their own freedom over that of their parental failure, and send the whole family off to prison.

A sentence of time with each other…I would expect their cell could be in the center of the conflagration of their procreation’s creation and still feel as icy as if it were a Siberian gulag.

Ah, the state of family in our country…so lacking in accountability.

We aren’t that far removed from a time when parents bore the shame of their children’s transgressions as their own.

Or when a family member would sacrifice themselves to save the rest.

A generation or two back, tops?

Where are those pioneers and parental pillars now?  Too rare, to be sure.

In reality, what will happen to this kid?

How will he be held accountable for the land he has destroyed?

The habitats and species he has threatened?

The livelihoods he has doomed?

The tens of millions of dollars his havoc has wreaked in emergency services expenses?

Will his parents be held complicit?

I certainly think they should.  It’s a values issue for me.  Certainly why I – as a judge – would offer them that Sophie’s Choice, in the first place.  A test of whether the value lessons parents are expected to teach failed to take root or if those values were simply never a part of his upbringing in the first place.

Sadly, my faith in our cultural humanity does not afford me the generosity of the assumption that this kid comes from competent parents.  Too often these days, I see people who are the product of hands-off parenting, abandoned to be raised by the public school system…a system that can barely teach algebra effectively, let alone morality.

Nor should it be expected to, yet here we are.

I’m loathe to agree with conservative GOP rubric on any level, but I’m fairly certain that if we’d managed to create a system of family values in our country – one that doesn’t involve the teachings of one very learned burning bush – that we could have probably avoided the current burning bush shituation in the gorge.

But, no…we didnt get there with family values.  Rather than remain true to our own country’s founding tenants, we were distracted by shoe horning selfish religious interests into law and instead of developing actual collective values as a country, the wedge was driven.

Commandments or nothing for us!

And here we are.  The fiery result of that political and cultural spiral.

How do we fix that?

In my mind, the politicizing of values came before the actual erosion of our family unit, but I could be wrong.  Either way, we’ve got a country whose population can’t relate to its own extremes with a dwindling middle ground and families whose only bond any more seems to be shared DNA.

Luckily, regardless of which came first, the present day culmination of this failure is 45.

I’d hazard a guess that our ashy PNW sky is a nice glimpse of the impending nuclear winter skyline courtesy of the two pettiest world leaders with maybe 6″ between them.

Here, I certainly hope to be wrong, but struggle to find evidence to support any faith I could muster in a different view of the future.

Because as complicit as our jag of a firebug’s parents are in their offspring’s fiery magnum opus, we as American’s are equally responsible for the ass sitting behind the Resolute Desk.

And he will not be outdone by some punk 15 year old.