This morning I read a blog post by a writer I follow about an art show he’d recently attended.  He talked about the unwritten rules around art shows, how depending on the degree of friendquaintanceship with the artist, you may be socially obligated to buy.  He went on to mention that this particular artist’s creations were more bedroom fare than living room pieces, and I thought, “Yup.  Been there!”

I was reminded of a time…

Sacha had broken up with me and I’d come out of my breakup funk, but The Wallpaper had not yet moved in.

The Silver Fox and I were new friends.

Among other things he did to remain too busy, was sit on the board of a gay men and abused women’s health resource organization.  He was helping with an art auction and I went along with him.

Something outside my norm, for sure.

He wasn’t certain of the outcome or attendance and asked me to make some bids in the silent auction to grease the wheels while he made his rounds, assuring me that I wouldn’t win anything this early but appreciating me helping to build some momentum.

Charities are so rigged.  Lol.

Of course, I won four items.

Luckily, after saving my home post-Sacha by cleaning out one of my 401k accounts, I had a little scratch left.  Even after treating myself to this lil guy…

I still had the $2k to cover my competitive wheel greasing.  Here’s a couple of pieces I walked with that night:

The B&W was kind of a “meh” moment of bidding as I thought the starkness of the medium and actual barrenness of the scenery matched my emotional self pretty well at the time.  Since then, it’s become a unique piece among my other B&W art, most of the others being drawing or photos of buildings.

Incidentally, the drawings I own were both done by former employees of mine, further demonstrating the social rules of art shows.  I picked these up back in 2015 when one of my employees at Green Zebra was opening her gallery.  Seriously, the only two pieces I was drawn to ended up being works by two of my other employees.  Crazy.

So, back to that first art show…in – what? – 2005?  No, I think it was 2004.  The second piece I won that night was actually a twin piece.  It’s the burnt orange dot pattern pictured above on the right.  I can’t say it was the only piece I was interested in winning, because it was actually half of a pair.  I loved the set and bid silently on both.  Unfortunately, a German couple was taken with the other half and bid only in it.

Thanks to my competitive streak, the wheel greasing went a little wild as Otto von Ruining My Life kept trying to outbid me.  I thought I had him as I snuck up to bid again in the final minute.  He was a few feet away and facing the other direction as I scurried behind him and made my winning bid.

As they announced the clip boards were being picked up, I congratulated myself on my win.  When the volunteer got to the table with the twin set, Otto calmly turned, scribbled a bid, looked directly at me and then turned back around.

My inner congratulatory celebration turned in an instant to a slow motion scream of “Noooooooo!”

But, at least I had won the piece with the best story.  Also a piece a normal person would never display conspicuously.

Naturally, I <ahem> hung it in my hallway in Seattle for a decade, ensuring everyone who visited my condo saw it.

So, here’s the story.

When I saw this piece, my first thought was, “Boy, that sure looks familiar…”

Turns out, it was painted from a profile pic on one of the earliest asocial media platforms, Adam4Adam.  That’s where I’d seen it.

Further, the artist was known as Father John, an actual priest.

That’s a pretty depraved story, right there.  But to further make owning this more personal to me, Father John and his long term partner – while now living in Portland – had been part of the model for the “A Gays” characters in Armistead Maupin’s Tales of the City.  By far my favorite books.

I heard this story, looked at this dick and thought, “I’ve gotta have it!”  You all enjoy that A-level ententres-ing.

I guess I have one final art show tale.

When I was with Rib, one of his co-workers was an artist.  Aung was the epitome of struggling and working on finding her identity as an artist – and, as it turned out, a human.  We went to several of her – their – shows.  The pieces I bought ranged from “fun” like this Monty Python evoking piece.

To the piece I picked up at a “Rent Show”. 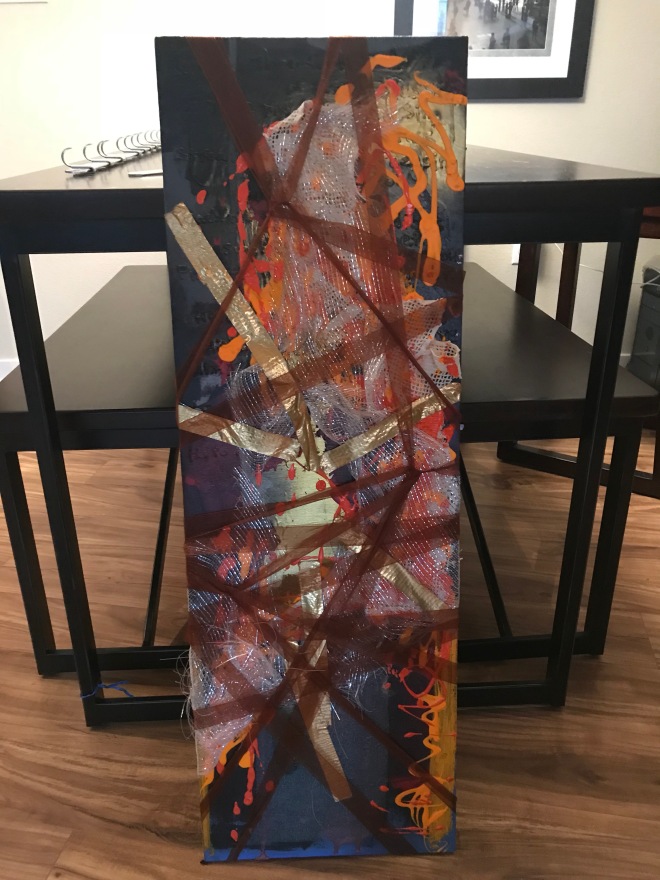 Hey, it fit perfectly in a blank space in my kitchen.  So there’s that.  Neither of these is displayed too prominently, if at all, these days.  But then there is my favorite piece by Aung.

Obviously, black and white pieces aside, I have a thing for pieces with bold colors.

I loved watching Aung mature as an artist.  Even more rewarding was visiting Rib’s flat after we’d broken up and seeing it filled with a bunch of Aung’s work that he’s bought at her “Moving Show” when she left Seattle.

He had learned the rules too well!