“You know what? Take a hike, don’t ever talk to me again.”

This was the reaction from Captain Can’t when I’d apologized for unintentionally offending him about eight months before I left my last job.

Well, The Boss had cleverly manipulated me into being the adult, setting a good example and taking the high road with my jag of a peer. While it worked poorly for me in this particular shituation and The Boss never re-addressed it with Cap’t Can’t, I am happy to report that upon quitting that exercise in daily frustration of a job, I have embraced Cap’t Can’t’s unintentional wisdom.

And will later today, I’m sure. I’m actually writing this as a motivator after failing to get outside yesterday…it was a “too cold”, overcast 65 degree day here in P-Town West.

Today, I need to find my motivation and a trail.

It’ll just be a city trail in Forest Park, but I’ll manage to make it new by inadvertently getting lost on my 10 mile urban sojourn. Unlike last week’s Hood River adventure with Little Buddy.

LB and 2.0 are in the process of buying a house across the Columbia from Hood River and we swung by their title company for a quick errand on the way to our trail. There we were…conveniently adjacent to Aniche Vineyards, where BreitBarb had a case of wine in need of transport back to town.

So, when in Rome…

Not a bad way to loosen up before a hike!

It’s a 3.5 mile switchback path that screams “Live in Mosier!” on behalf of what I’m sure is a nonexistent Mosier Chamber of Commerce. We’ll get to the views, but the houses you can see across the ravine the trail skirts as you climb the backside of a hill are incredible. As much as I appreciated the real estate views during our climb, I was also well aware of the fact that if I lived there, I’d appreciate a much better view facing out past the Mosier Plateau trail and over to the breathtaking Columbia River Gorge.

So, speaking of ravines, Little Buddy and I learned something about each other that day.

She learned that I didn’t like heights and I learned that she didn’t know that about me. There was occasionally a few feet between the path and that cliff. It wasn’t bad, mostly it felt vaguely reminiscent of the hillside Buttercup throws the Dread Pirate Roberts down in The Princess Bride. And there were plenty of wildflowers growing alongside the trail. 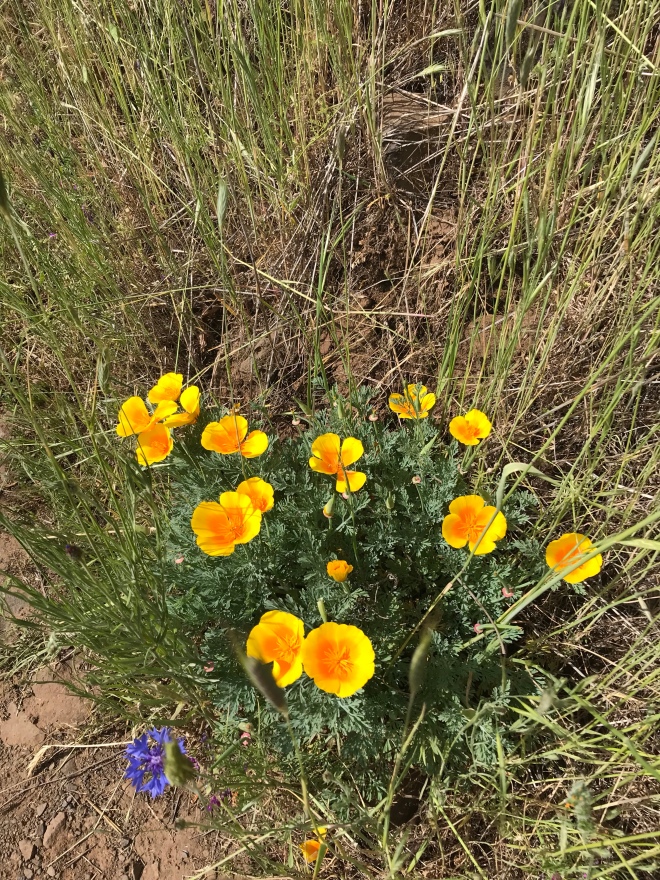 But as you can see in the swimming hole pic above, the situation wasn’t all fun and games.

That newfound fear amused us on the way up. I think LB was a little relieved to find that I had a more normal fear than the previously shared fear of sharks…in any body of water. She had brought her new family pooch, Barley, as well. At just under 4 months, this was his first hike and he was a well behaved champ of a hiker, so that was a fun distraction on the way up, too.

He was much better behaved than the two dogs we encountered on the hilltop after we did the turnaround loop. I was leading, so I saw the first of these off leash pooches playing amongst the wildflowers and knee high wild grasses before LB or Barley and excitedly exclaimed “Goat!”.

LB told me to get a pic because our friend BreitBarb hasn’t met a negative emotion goats can’t banish. Now I’ll always be the boy who cried goat.

These dog’s owner had very little control of his animals. I learned both of their names, but can only remember Peter, the first one we met, now. Of course, I remember it because the owner yelled it a lot during the back half of our hike in lieu of actually leashing his exuberant pup. He also yelled the name with some fey accent, so it didn’t come out “Peter” as much as it did a plaintive and eventually annoying “Poitier“.

Still, the view from the top of the trail was simply awe inspiring. 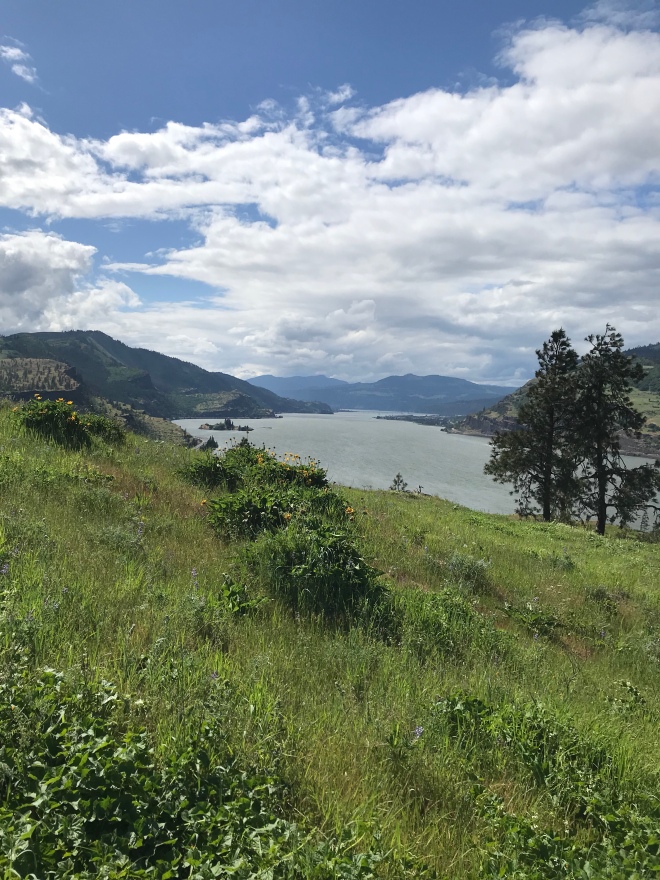 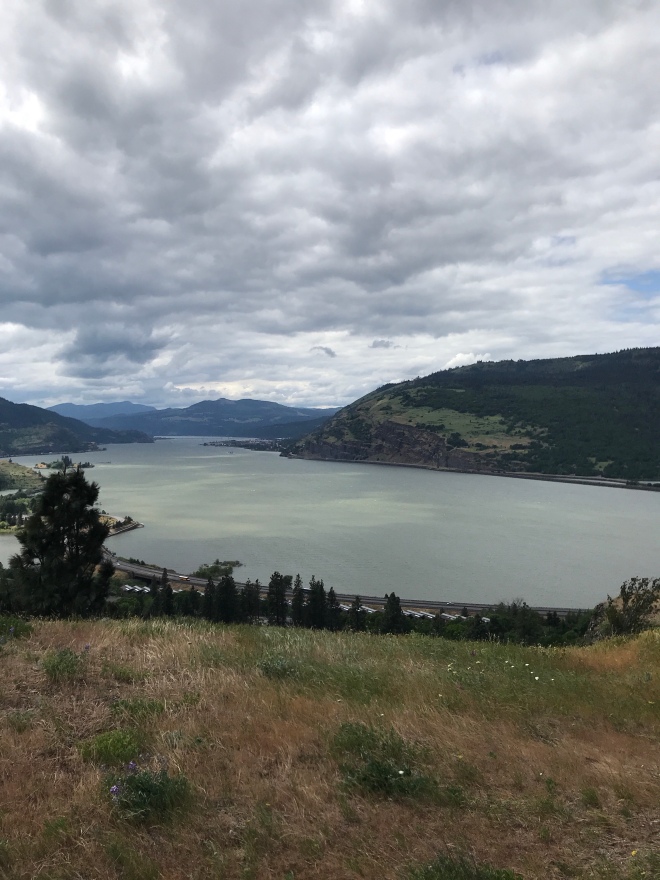 I really should have taken a selfie of wind blown old Xtopher, but while I really wanted to see what the never ending, cooling mountaintop gorge winds did to this shaggy mess of hair, I still don’t selfie as often as I could as an American citizen in good standing should.

I’d be a lousy Kardashian.

I couldn’t imagine the view being any better from the top, but I was still a little curious about the eastward view from the top since we could only see westward and across the river into Washington state from our trail.

I had all the friends I wanted on the trail with me. Little Buddy and I chattered easily away during our hike, occasionally breaking to get Barley’s take on a topic. Still, this didn’t prevent a few children of the wilderness from trying to introduce themselves to me on the way back.

They kept getting bigger and bigger as the trail descended, too. Weird. Shortly after we passed back by the swimming hole, they stopped appearing, which was good because if they had gotten any bigger I’m afraid I would have been sharing the path with a Gila Monster.

The return trip also afforded us a longer stop at the little pioneer cemetery that we’d passed on the way up. 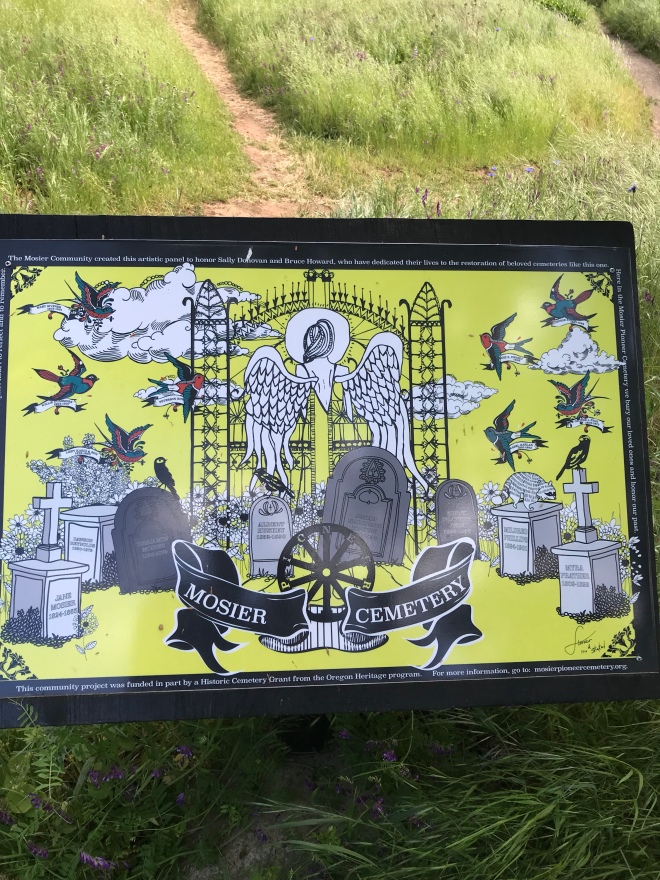 That second pic is of an 8 year old’s grave. She and I share the same birthday so it was an exciting and eerie discovery.

There weren’t a lot of grave stones in this tiny memorial. There were a lot of depressions in the ground around the trail that made me suspect there were some unmarked graves with wood caskets that had caved in on the trail side. Many of the visible graves were young people, 20 and under…so heartbreaking to imagine the pioneer experience of losing any family on their trek west, let alone losing a child and having to leave them behind.

I was pulled out of this morose imagining on the way up by the appearance of hikers trailing behind us. They stopped in the little cemetery, too, and we moved out. It felt too crowded with our party of three and their party of five. Three moms and two infants.

In addition to feeling crowded, I also didn’t want to be around moms and their babies should the realization that these were largely kids’ graves dawn on them.

Why did I feel guilty about this company?

Anyway, the path being largely switchbacks, we got not far from the Mom Squad. Their chatter was…incessant. I’m sure our own was equally distracting to them, maybe. For me, the semi-valley-girl-esque tone of their talk distracted from the rest of the amazing environs.

I was appreciative of their active lifestyle and unwillingness to be limited by their children.

I also judged the safety of strapping your infant onto a front-facing backpack and toddling off on mountainside paths that made me uneasy. I was fearful that mother and Child were only a loose stone away from going over the side.

It made me a little uneasy. I was glad when our little party returned to the viewpoint from the turn around loop and discovered that they had left for the trailhead without doing the loop.

Still, kudos to getting the kids out in nature early. I believe it will create a solid connection to the beautiful PNW wilderness for these newly minted S.N.O.B.s (Society of Native Oregonian Born) and that’s the type of person that keeps the PNW spirit alive!

Little Buddy and I had originally planned to grab lunch after our hike, but we were running late and she needed to get home to get dinner going for her boy and also allow Barley to relieve himself. He’s one of those pups that will only pee off leash…

Still, there was time for a teensy wine tasting at Marchesi Vineyards on the way home. LB is a member, so the tasting is gratis. And they had my favorite wine back in stock, so I could pick up a couple bottles of the good stuff to hold me over.

Not driving or having a car makes it hard for me to get out of town, so I love having friends that will take me along every now and again and try to make the most of every chance I do get. 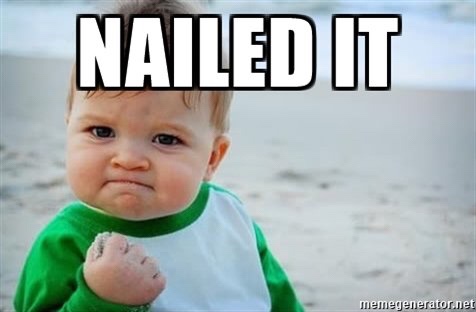 This is my type of high road.