Over the past week, I’ve been missing being active as my foot heals up. It’s provided me the opportunity to live actively vicariously through myself…my memories of being outside and active, at any rate.

It’s also gotten me thinking about the unfortunate side effects of getting back on my bike. Back in the saddle, if you will.

The muscle soreness, I look forward to. Achey knees, I’m able to tolerate…literally walking off the cumulative shock in the hours or days after a ride.

That saddle rash, though.

Short of getting a new seat, I’ve done what I can to minimize the occurrence of saddle rash. Wearing fewer layers of fabric to minimize chafe. Wearing the right layers, ie: padded undergear. Post-ride care, including a bag balm, because some remedies have to make you question whether the cost of the cure is worth the cause of the malady.

Kinda like the old chestnut about only sane people questioning their sanity. So when I ask if applying salve to my taint-ish region is a reasonable post exercise recovery…I have to be able to affirm my cycling adventures. It’s not as worth it as it would be if someone else were (gingerly) working the cream into my nether area.

But, since that’s not a fun part of my cost/benefit cycling analysis – and since today is the first day old leftie is feeling like a ride won’t send my recovery backwards – I move past the potential discomfort into other areas of my recent outdoor adventures.

So I’m co-opting or resurrecting this draft of my second BikeTown Chronicles with a few things further onto the plus side of cycling in order to motivate me back out onto the road this afternoon!

I had gotten to the point where I would remember gloves. Actually, I was pretty proud, I remembered them after my first ride. My forearm soreness was pretty severe after my ride, but in a weird way. I also experienced numbness during and after my ride. I remembered the gloves recommendation from one of The Fabulous Baker Girls, who is an avid cyclist. She swore the padding in the palms of the gloves would reduce, if not flat out alleviate, hand and wrist numbness during my ride.

The fact that I experienced numbness up my forearm after the ride reinforced the need for gloves. I put them inside my helmet so I wouldn’t forget them for my next ride. My hands and wrists still get a little numb during my rides, but not until I’m about 10 miles in. I have a mountain bike, with traditional straight handlebars. I’m sure there’s an alternative bar that would afford me the opportunity to reposition my hands during my rides so that I can reduce this numbness even further, similar to 10-speed handlebars. I just haven’t done any research into those options yet.

Cycling took an unexpectedly social turn on my third or fourth ride of the season when I ran into – more accurately, he “caught up” to me – Casey Adler toward the end of my Springwater Trail ride. How he recognized me from behind, in cycle gear – including a helmet, Mom! – is beyond me. I don’t consider myself to be that distinct looking as to be recognizable from either that angle or at that velocity.

It was a nice surprise, though. We rode the last couple of miles of the trail together, catching up.

Honestly, though, there was a moment where “catching up” turned into “catching my breath”, when I tapped out and told him he needed to talk for a while while I wheezed and listened.

I hadn’t been in a situation where I needed to be cognizant of sharing the path as we rode two abreast and chatted. I’m usually the grumpy guy muttering “excuse me” as I steer to avoid such people. I was proud of the fact that Casey and I took turns dropping back to avoid colliding with oncoming groups that were also riding side by side, albeit obliviously so. Hell, Casey was even aware enough to see a faster rider coming up behind us and sped up so we were riding single file again so Speed Cycler could pass.

Our social cycling ended abruptly when we realized that Casey was taking a street route – presumably – back to his place in NoPo while I was peeling off to take the Esplanade back toward my place.

After we separated, though, I focused on his casually motivational comment when I asked where he was coming from. He simply said that he’d taken the path out to Boring and was on his way back in. I was inspired because that’s a 50 mile ride for me, probably closer to 60 for him.

It was just two rides after this encounter that I managed – and promptly swore off of – my own half century ride. I know I’ve got another 50 mile ride in me…at some point. I just need to figure out how to incorporate them into my cycling routine, since they are time consuming and do have quite a physical toll.

My Health App and Strava finally synced on this ride, too! 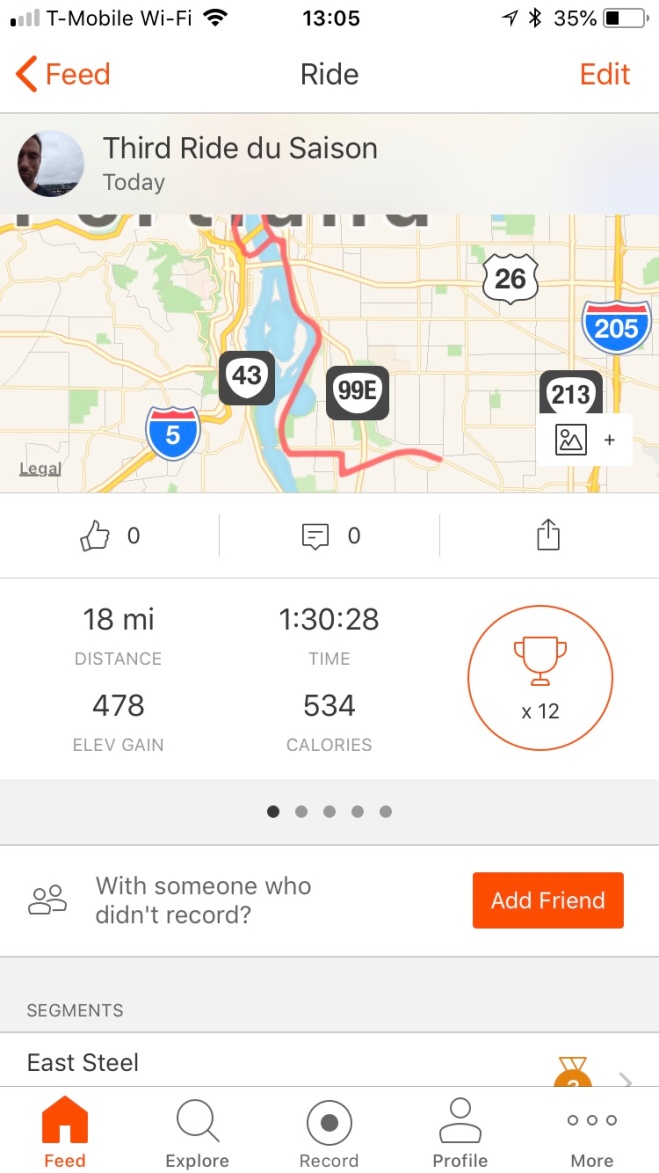 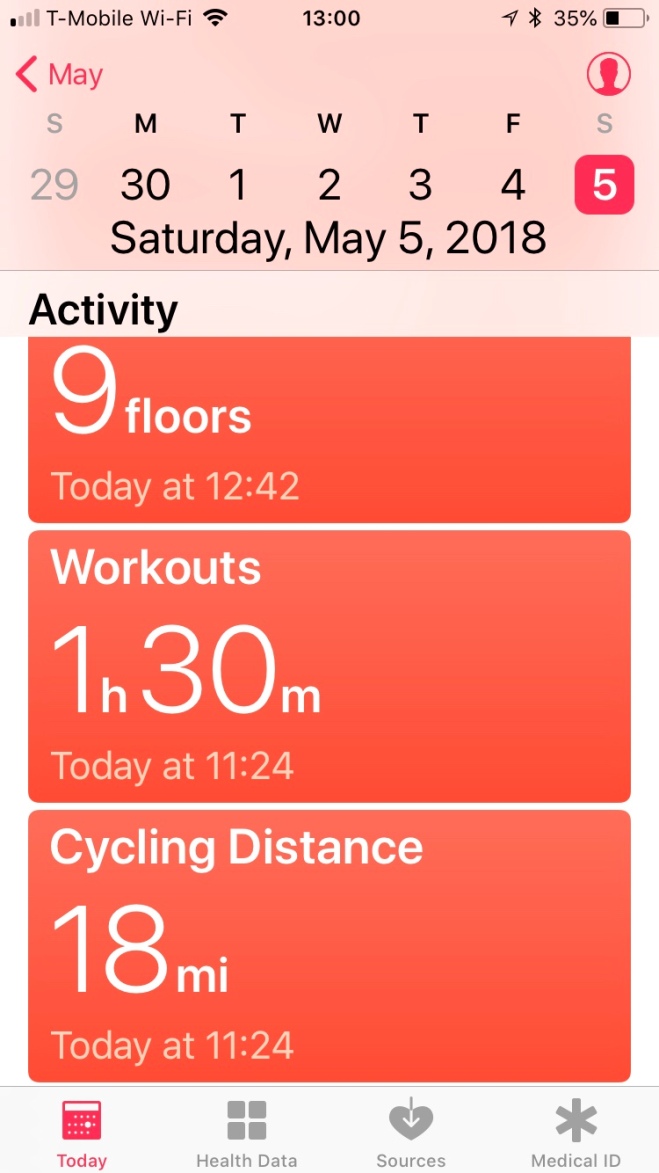 Prior to this, for whatever reason, there had been about a half mile discrepancy. My Health app had been shorting me a half mile in ride and doubling the total mileage post-ride.

Interestingly, it had been – and still is – waaaay overvaluing my caloric burn. It measures the energy in kcal units, which as my simple mind understands metrics – is 1000 calories. For the ride above, Strava estimates a 534 calorie burn, while my Health app insists on making that a 534 kcal burn.

Sadly, I don’t see me burning a half million calories in a month of cycling, let alone a single day.

But like I said, maybe calories and kcals are interchangeable and I’m just an idiot on the subject.

Could totally be the case.

There are definitely a few things for me to remember as I psych myself up for a ride today. Negative factors that are beyond my control, unlike padded shorts and gloves.

The ride that prompted this entry originally occurred on Cinco de Mayo. I failed to connect the dots between the holiday and the fun zone idiots I encountered on my ride home along the waterfront. The path along the waterfront is mixed pedestrian, cyclist, skateboarder, roller blader, unicyclyer, jogger, segue rider and any other mode of transport you can imagine. It’s Portland! The city may as well put up bleachers on the path at Gov Tom McCall Park since the path runs between the river and the strip of grass that houses amusement park rides or tents during the many summertime waterfront events. This effectively renders the pathway unnavigable as lower functioning humans are stunned into a slack jawed, mouth breathing and quite stationary existence on the path as they contemplate whether or not to enter.

Sidenote: this is not happening anywhere near the actual entrance to the festival.

Since we are in the midst of Portland’s annual Rose Festival activities, the fun zone is in full swing. Luckily, there’s a path along both sides of the river. I just have to remember to take the right one on my way home!

Hey, did you know that Walkathons are still a thing? Apparently, most of them are in support of Rude People Pride since they seem to block the entire path…prompting me to admonish them to share as I weave and wobble through the crowd.

That said, a Monday ride is a ride free of Walkathons!

I need to be careful to time my ride so that I’m back before rush hour for Portland’s bike commuters. This is particularly important while there’s an event at Tom McCall Park since everyone funnels along the east side of the river to get home, bypassing the virtual bleachers on the west side of the river.

Generally speaking, I love catching the worker bee exodus of Portlander cyclists as they leave work for the day when I’m returning from a ride. It reminds me of what a great city Portland is to live in.

The only pinch point is the Steel Bridge. 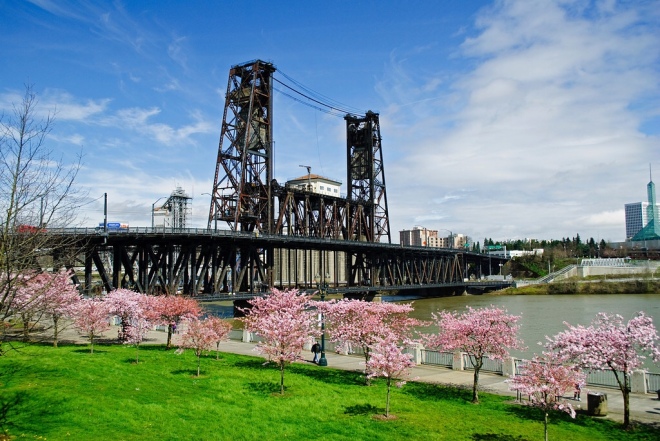 This bridge was opened in 1912. One has to admit that at 106 years of age, it’s fared quite a bit better than more infamous technological marvels of that same year. Portland has also worked to integrate the bridge into its infrastructure plans to make sure it doesn’t cripple the city’s growth through the years.

Originally, this two-decked bridge carried vehicles on its upper span and train traffic along its lower span. When Portland introduced its commuters to light rail in the 80s, the upper span was repurposed to carry two lanes of car traffic and two lanes of light rail MAX trains. When the Eastbank Esplanade was created, the Steel and Hawthorne Bridges were selected to connect the east and west side waterfronts, each gaining a pedestrian and cycling path. For the Steel Bridge, that manifested in an addition to the lower deck. At about 5 feet wide, it’s half the width of the paths along the waterfront.

For all the ribbing Portland drivers get for being too polite, demonstrated nicely by Portlandia in its “No, You Go” sketch where two drivers at an intersection bent over backward to yield to the other, one of whom didn’t even have a stop sign or signal, the same cannot be said for its cyclist population. Especially bike commuters.

I’ve long suspected that being killed as a pedestrian by a cyclist would be the perfect manifestation of a Red Shirt worthy demise. Little did I realize that cyclists are trying to take one another out, too. During the Cinco de Mayo fun zone-slash-bike commuter rush hour, the Steel Bridge became something of a cycling Thunderdome. As I was crossing over in this last mile of my ~20 mile ride, the path was packed with slow-moving pedestrian and bike traffic.

I’m sure there was a very good motivator for what I experienced on the bridge this day, but all I can muster is either selfishness or straight up idiocy. We riders were all doing a slow pedal across the bridge as we navigated across with our walking counterparts. For whatever reason, an oncoming cyclist decided to pass a mother/father/stroller situation that was walking side by side across the bridge.

Mind you, at around 5 feet wide, this path is barely wide enough to accommodate three people across. This oncoming cyclist – in her irrefutable good judgment – decided rush hour was the day to make this a four person across path by bending the rules of physics.

She was partially successful, this typically stupid American. However, most of her success I attribute to me slow-crashing my bike into the hog wire railing of the pedestrian path. The commotion she caused didn’t cause her to slow down or rethink her judgment whatsoever. To her credit, it also didn’t cause her to speed up, so the chaos she created was maximized.

What a feckless cu…well, you get where that’s going.

So, hopefully the need for editing in this post is minimal, since I’m giving it less than that. You see, I have a 3 hour and 6 minute window for my ride before the bike commuter rush hour starts. I need to run.