After ending up on this trail a few times by accident or happenstance, I intentionally set out on it this afternoon. Well, it was my Plan B after getting to my trailhead and realizing that my trail to Pittock Mansion was closed.

It was cloudy, anyway…no mountain view.

So, I took off on the Wildwood Trail in the opposite direction. I know after my accidental 15 mile hike that you cannot hike any distance in this direction and end up at Pittock, as I had imagined until just recently.

However, I was faced with a different struggle this time: branch out on Holman Lane and face the climb or attempt an equally challenging descent to finish my circular hike by staying on Wildwood.

Knowing how my knees feel after a 10 mile hike – and seriously, I stupidly keep thinking this will change the more I get out on the trail – I decided coming down Holman Lane would end with a near-certain fail. No…fall.

I now know that Holman Lane is 6/10 of a mile of straight-up-enough-hill. I’m pretty sure I left a sweaty water slide behind me as I wheezed my way up the trail. But unlike last time, I managed to haul my keg of a belly (I cannot make fat ass statements because: no ass) up to the top without doubling over midway to catch my breath.

Actually, adding insult to injury on that last hike was seeing a rather fit petite woman running down the path as I climbed upward.

“Sure, take the easy way”, I thought, only to be corrected ten minutes later when she passed me from behind.

My life really is just an exercise in chagrin.

Oooh…right here, right meow, I’m being tickled by inspiration to try out a new Chrisism: chagrinagins.

Shenanigans that lead to humiliation…thoughts?

Anyway, this petite jogger got hers when I stopped at the shoe brush that you’re supposed to use entering and exiting the forest to prevent plant contamination. I had just used it – mostly as an excuse to catch my breath again – and as I turned around, she was blowing by me.

Without using the brush.

I know she felt the burn of my grumpy old man glare as she padded away.

From my prior visits, I know Holman Lane ends at Cornell Road up in Portland’s West Hills. There’s a 130 yard road surface walk to the Birch Trail, which will then take you back to the Wildwood.

I also know that there’s a creeper house between the shoe brush station and Cornell. I realize now that I don’t have a friggin’ pic of it, but it was seriously a Red Shirt Diaries moment for me when I first encountered it last year.

I’d spontaneously decided to take on the Holman Lane hill. Midway up, I realized I was following a couple of guys hiking the same trail in a meandering manner. I shifted into inspiration mode, like I did back when I was racing.

Basically, find a nice butt and let it pull you along like a tractor beam.

Once I was closer, I decided they were on a date, because: two guys in the woods not talking about sports is obviously gay. After I passed by them, I overheard their conversation turning to Grindr and Scruff. I presumed this is where they met and they had decided on a hike for their real life meet up.

I thought it was sweet that their real life meet up was an actual date and didn’t take place between someone’s sheets.

Anyway, for some reason, I began to wonder if they had changed their conversation to asocial media just to mess with me after they saw and profiled me. I talked myself out of this brief panic, they were dressed too nice to be thrill murderers.

When I passed this house, with its No Trespassing sign and significant brush coverage, I started to doubt my judgment. Maybe they were baiting me…seriously, only the roof line of this house was visible.

As I’m writing this now, you know nothing happened, however, I swear I heard Dueling Banjos in my head as I panic-walked past the drive. The boys actually caught up to me as I stood at the Cornell Road trailhead wondering which way to run away – this is a pivotal moment in horror films and wrong decision results in someone hanging on a meat hook.

I was offered directions to what I now know is a relatively close reentry point to the Forest Park trailways.

Also, a ride back to town.

Plus, if it was a date, I didn’t want to become a third wheel. Or a third…

Anyway, this creepy house and leaving the trail for a street walk are both the icing on the cake for this too uphill of a hike. I try to avoid it, usually, but yesterday my hand was kind of situationally forced.

I used that as an excuse to have myself an exploratory lil adventure!

Now that I’m getting to know the paths and where they generally head, I decided to take off on this single track footpath prior to reaching the Creeper House.

This was a mistake.

I had figured, knowing how Holman ends and picks up 130 yards to the NW at the Birch trailhead, I decided to take it as a shortcut. Assuming, of course, that I would come off this little deer track on the Birch Trail in about a quarter mile.

What I did find about 1/10 of a mile in was a park bench at a widening of the trail. It was right across from this

and I figured that some extras from Grimm had been living here since the show ended. The bench looked about 30 years old, based on style, but looked to have been “freshly” painted black sometime within the last few years.

I was somewhere – generously speaking – in the backyard of Creepy House. Maybe this was a fort their kids were making.

As I was wondering why that explanation should make me feel better, I kept walking. The narrow path became occasionally overgrown, but I could still make out my destination.

I worried slightly about spiders and critters as I walked. That changed to concern over being scratched by occasional blackberry brambles that protruded into the path. Next up was worrying that I’d lose my footing on a small descent or trip over a fallen branch and twist my ankle.

Ultimately, my concern should have been how far in I would have to go I order to connect with the Birch. I felt that I’d missed it and would actually end up on the Wildwood again.

I was at a quarter mile off path. I decided to give it a little more time. My optimism was rewarded at the next bend in the trail with…no more trail! I thought I could barely make out where it picked up again and debated wading through the plants in that general direction.

No, there it was!

Ok, not playing that game. I turned around and made a hasty, totally not cool retreat to the main trail, half expecting to be confronted by the Predator.

But, obviously I made it. I proceeded toward Cornell Road, mentally tipping my hat to the Creepy House as I walked by and my panicked breathing returned to normal.

Comparatively speaking, the rest of my hike went without incident. I ended a little differently this time 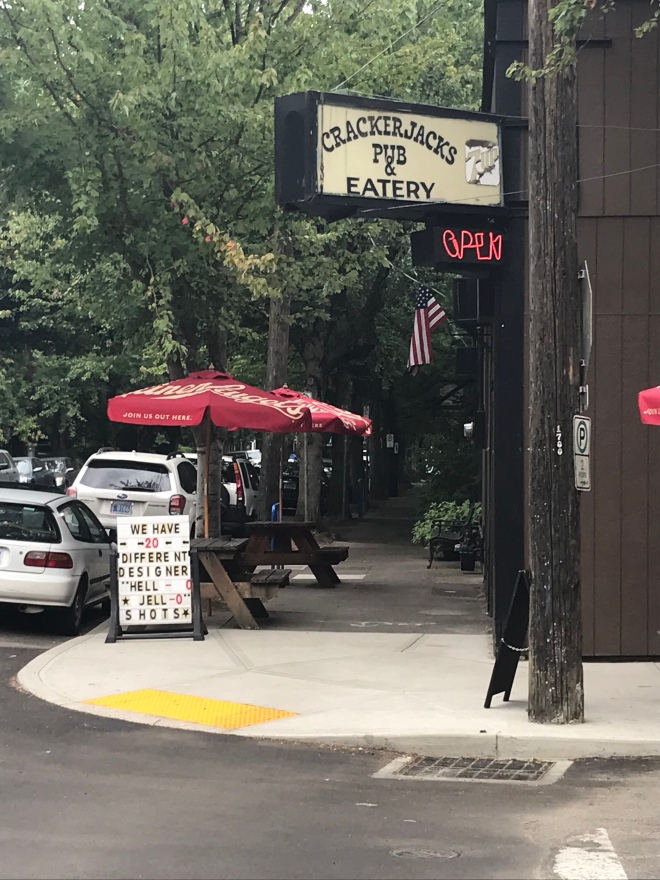 calming my nerves with a beer at the closest bar to the trailhead I could find.

Then I wake up this morning to the suggestion from the Silver Fox that we see a movie. He suggests Leave No Trace – which is about a father who takes his daughter to live off grid in Forest Park. 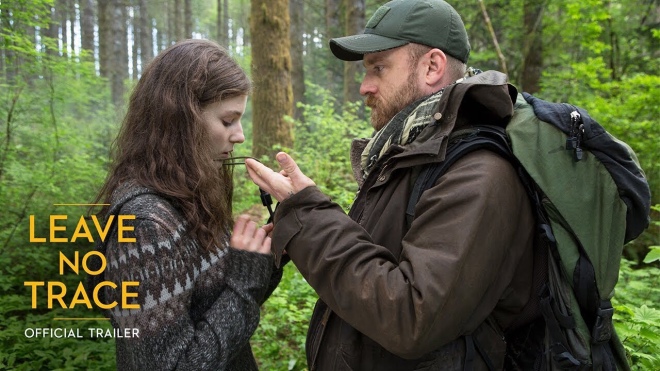 One thought on “Holman Lane Hike”