Don’t worry, I’m sure I’ll be back to my normal Grumpopotamus self in the morning.

This has been me:

You see, e-scooters have come to Portland. You’d think I would have strong feelings about them, but I feel like the cacophonous complaints from the rest of the city has drowned me out so completely that I don’t even care any more.

Well, check that. I can still muster a sympathetic lil eye roll when someone else mentions the subject. But otherwise? Meh.

I’ve got 99 problems. E-scooters can be everyone else’s. I’m kind of just glad people are demonstrating an ability to experience the combination of low grade anger and impotence to effect change that is my daily struggle.

Go ahead, shake your fists in the air as these e-scooters silently and quickly surprise you from behind. 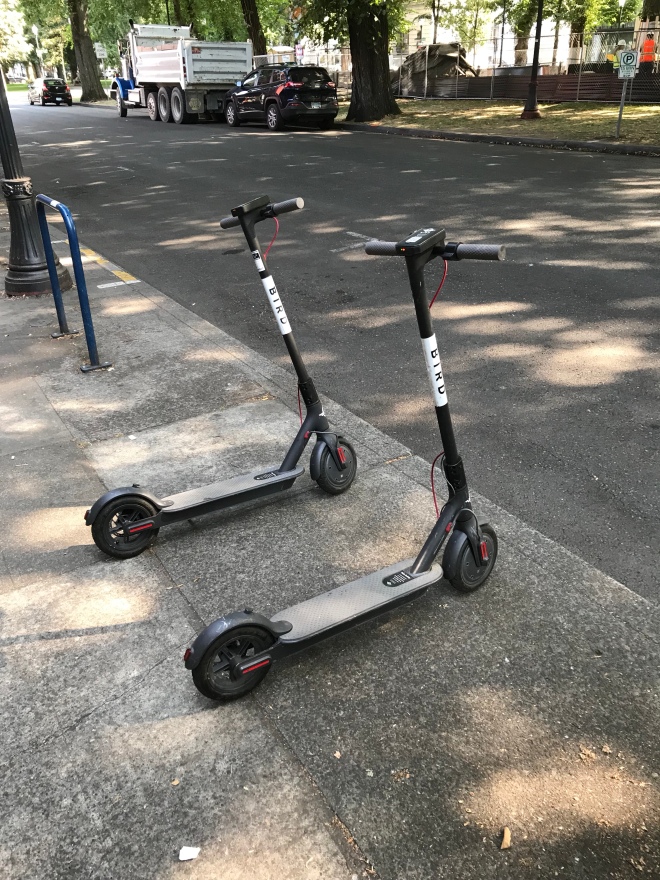 Rage at those windmills as people leave them scattered about without thinking of the impact their actions will have on anyone else. 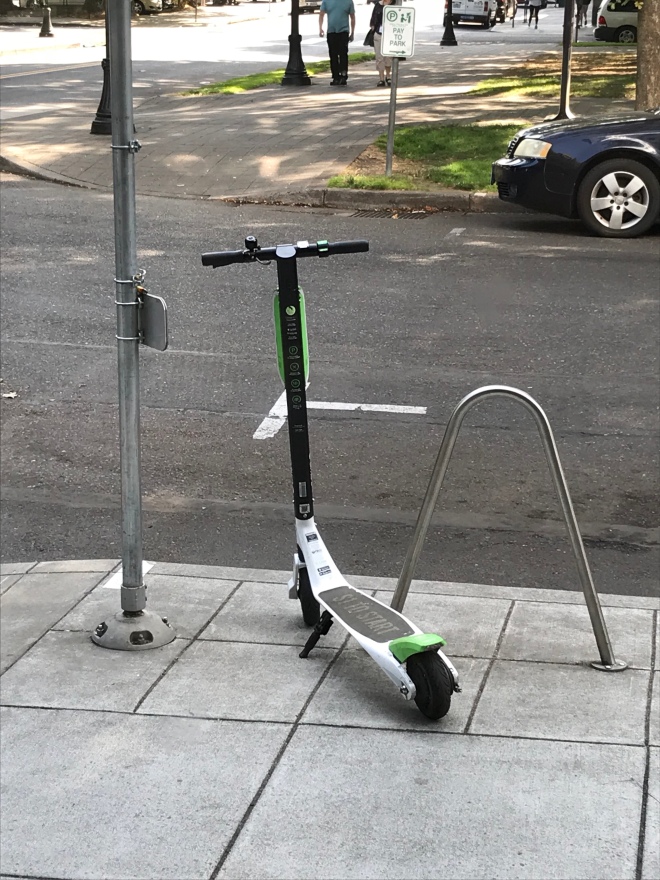 Cluck your tongue in disapproval as you witness obvious violations of the simplest e-scooter operating guidelines. 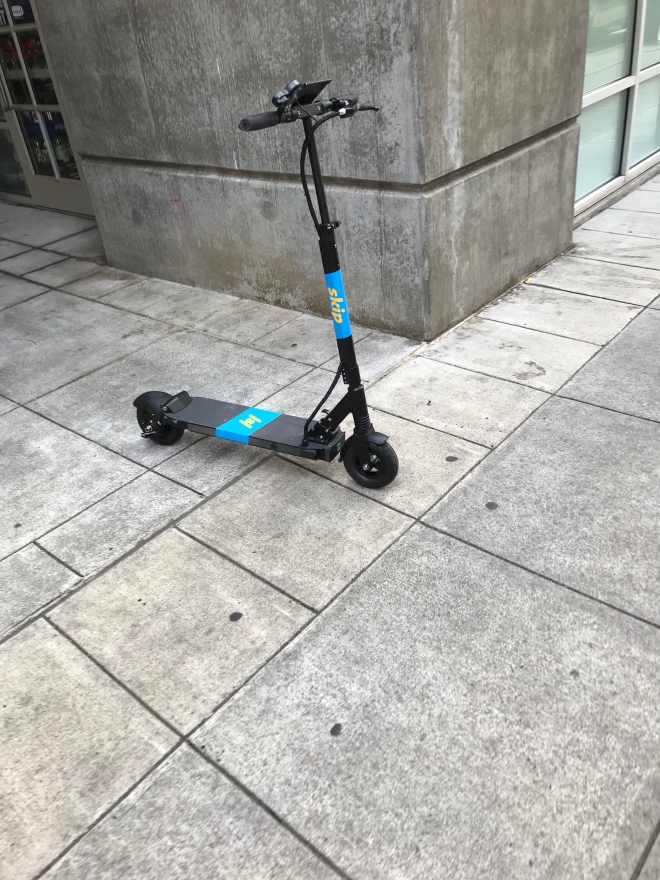 …for all the good it’ll do you.

To their credit, Lime has made their operating guidelines pretty idiot-proof. To their fault, they seem to have willfully failed to realize that there is no bar so low that a #StupidAmerican won’t try and crawl under it.

Here are the rules, presented as pictographs so you barely need to know how words work to understand. 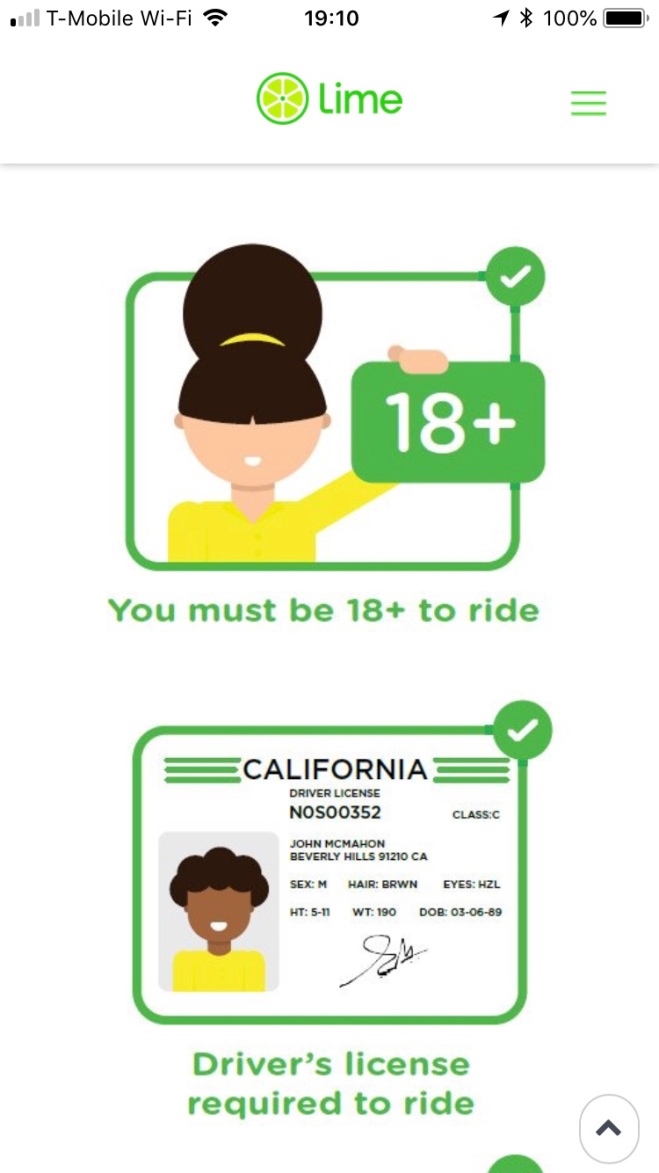 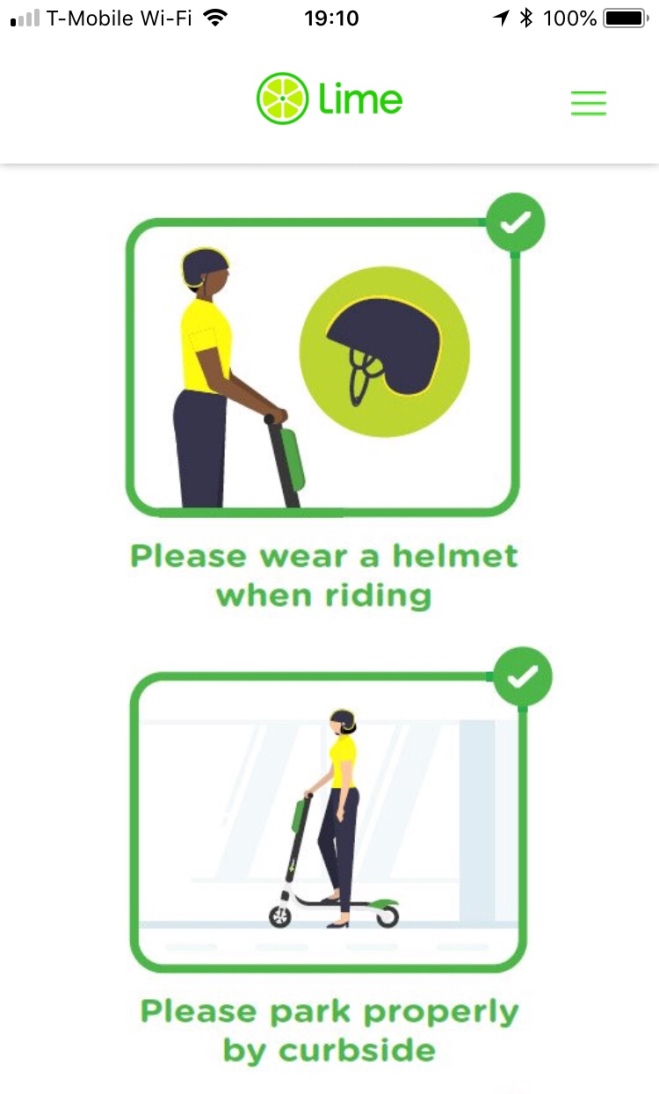 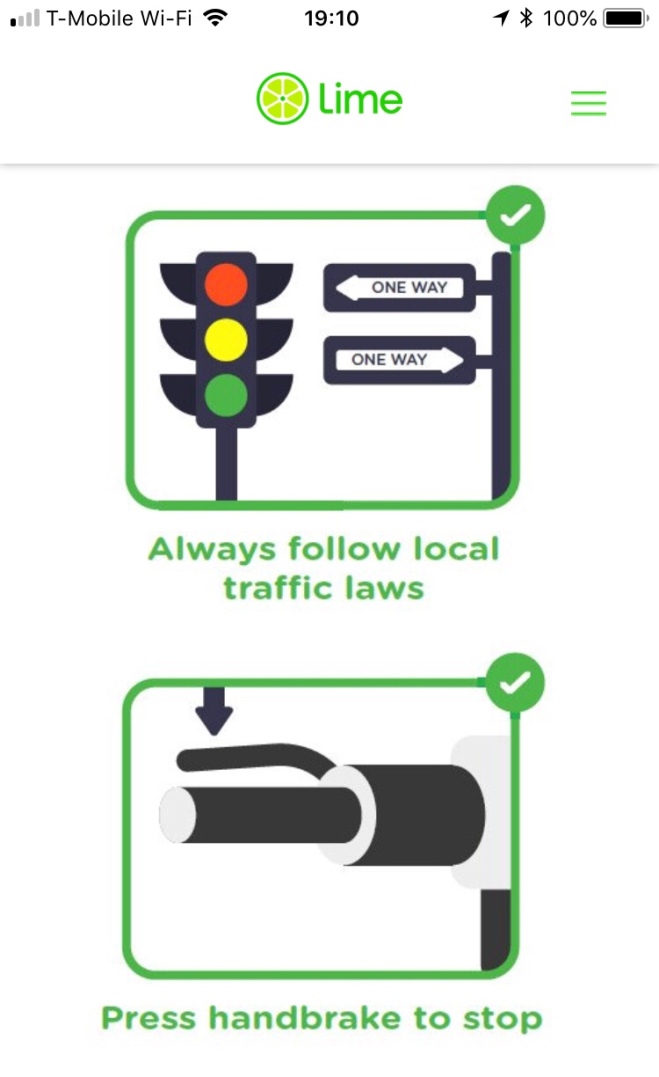 I’m a little bothered that this handbrake thing needs to be explained. 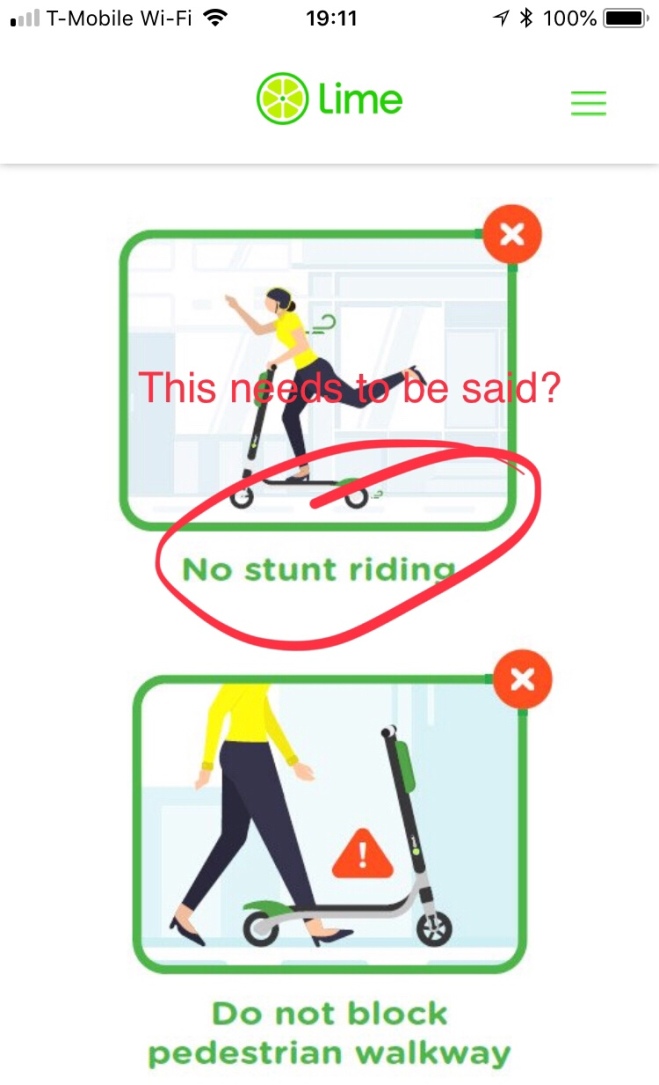 There was one more about avoiding obstacles in the roadway, like potholes. I’m not in love with that one so much because I’m usually rooting for my pal Darwin anytime Stupid Americans are involved.

Anyway, I’ve been listening to people carp about this or that e-scooter issue for a few weeks now. Most of the complaints tend to be one of three things:

I pretty much keep my own counsel on these conversations because, Darwin can use a win and I think these scooters can help take some of our bigger idiots out of the gene pool…I know, that was pretty savage. That said, I don’t want that win to come at the expense of some oblivious everyday Joe that’s texting as he walks down the street and trips over a carelessly parked scooter.

If you remember the picture rules above, you’ll recall that there isn’t anything in the pictures that says “don’t ride on sidewalks”. As a matter of fact, I mistakenly believed that e-scooters were supposed to be used in bike lanes and sidewalks as opposed to traffic lanes.

I think I was wrong. But, aside from the stoplight picture, I only know that because I watched the maybe-minute-long instructional video on the Lime website.

How many people are gonna do that? Certainly not too many of the people complaining about the scooter users.

From what I gather from said video, you shouldn’t use e-scooters on sidewalks. I’m discerning that mainly from the demonstration video, where all scooting was done on the road and sidewalks were only shown with parked scooters. Riders were also told to obey all traffic laws and the helmet advisory was repeated.

Nevertheless, I’m just listening in on these conversations. I’m also assuming that when I complain about my grumpy old man triggers that I look like the sane e-scooter haters and not the frothy-mouthed versions.

It’s my blog, I can delude myself if I want to.

But my voyeuristic pleasure took an upgrade this week when I subscribed to Nextdoor. I’ve been hearing exasperated sighs from the Silver Fox lately when his phone Pavlov’s him and it’s not anything exciting like a text or a juicy news tidbit to fuel our coffee clatch conversation. “It’s just Nextdoor” hell say dismissively, without explaining.

At first, I totally got his exasperation:

Here’s a little snapshot of the conversation that’s gotten me through the last couple of days. Just my favorite parts, if you’ll pardon my editing out the repetitive stuff. 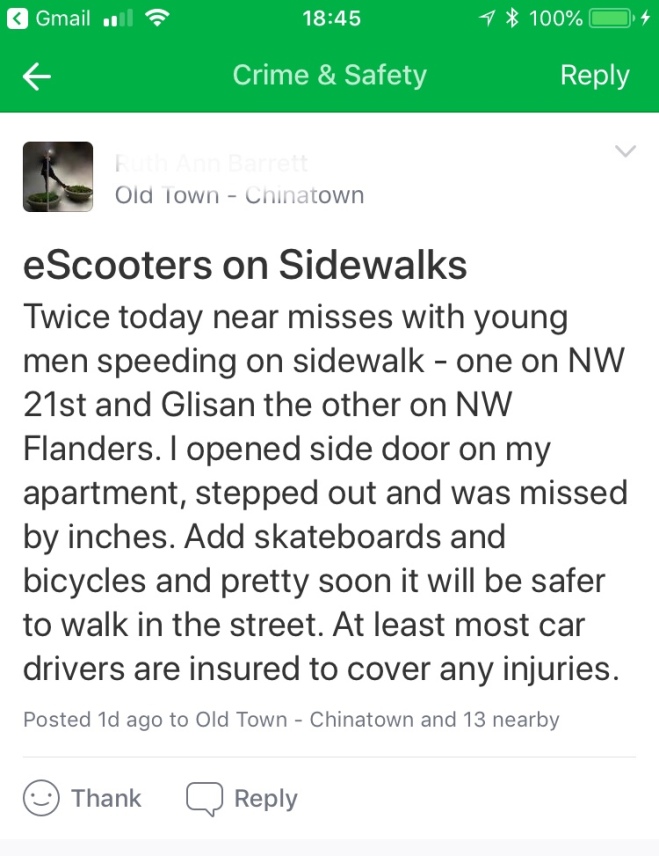 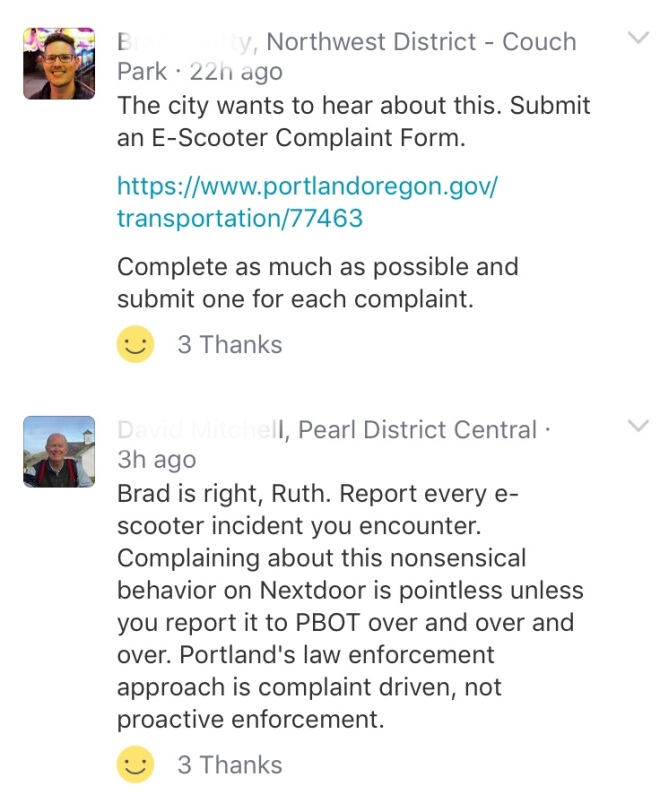 Hehe…that second guy kinda turned on the Original Poster by telling her that complaining on Nextdoor was pointless. 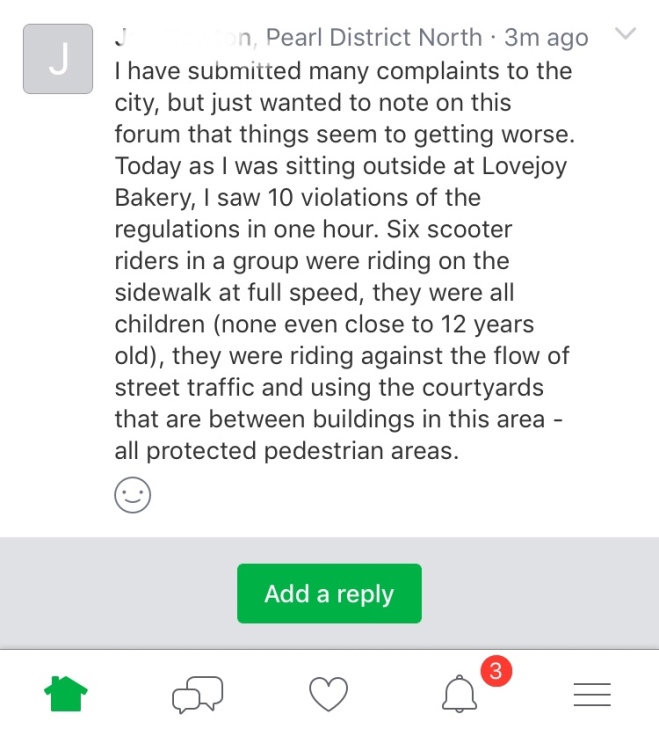 That last one really gave me an inner tee-hee moment. Not ten whole violations in a single hour!

I just imagined that cranky lady sitting in the Adirondack chairs outside Lovejoy Bakery barely able to enjoy her luxury pastry and alternative milk latte for all the fist shaking she was doing. She sounds like the type that might make the staff make her a new latte since her first didn’t stay hot.

Icing on the cake?

Our local free weekly rag, Willamette Week, ran a story after week one with a headline that basically congratulated us citizens for the fact that only one scooter had ended up in the Willamette River in the first week of use.

Seriously? What did they think would happen?!? 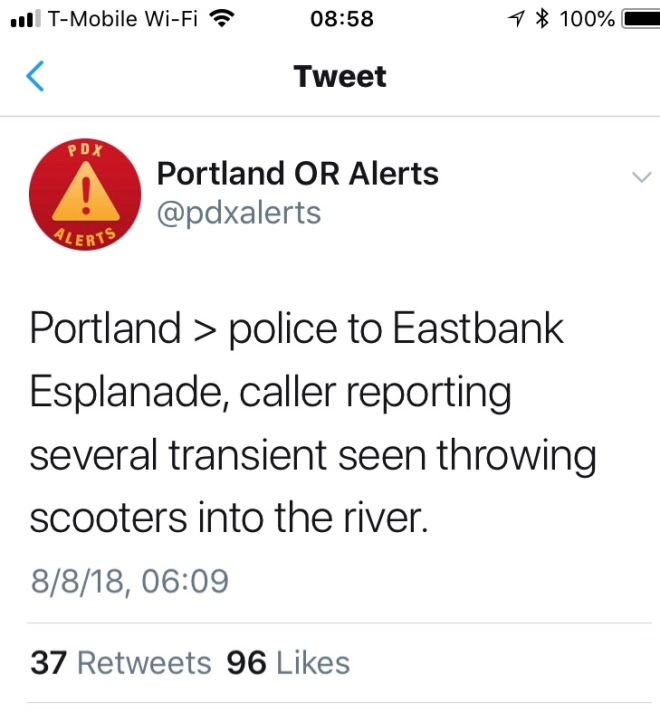 3 thoughts on “I Took A Break”