You laugh, thinking, “Shouldn’t he know this by now? How is this a ‘Today I Learned?!?'”

Well, I’ll get to that, but let me just say that as I’m writing this, I’m also realizing that it just happened again. I’m sitting in the Rainbow Room, waiting for Bachelor #0 to join me and grumbling that my barstool is uncomfortable and maybe I should move. There’s a grouping of four cushioned chairs behind me and I’m debating sitting at a conversation pit for four as a single and whether that’s rude when Bachelor #0 calls me.

Since I’m in a bar, I cover my drink and head outside so I can hear.

Resisting the urge to answer with a hissed, “What?!?” that Miranda Priestly would approve, I answer. He just wants to check and see if I still want him to come because he has to shower still.

No, but don’t let that stop you.

Anyway, that’s another story, but don’t count on reading it…I did dub him Bachelor #0 for a growing list of reasons. The fact that he’s my age is not on that list.

Well, maybe that he is my age but acts like he’s the age of guy that I’m normally attracted to is on that list…

Anyway, as I’m coming back inside, I decided on moving to a comfortable chair, some guy sits down in this little grouping.

So, I say to the guy, “Excuse me,” – manners are important – “do you have friends joining you?

“Would you mind if I joined you? I don’t want to join-join, just a seat, if it’s not gonna infringe.”

He looked a little confused and I fought to think he didn’t know infringe from fringe versus he was worried that I clearly pointed out I didn’t want to join him. And, yes…he was my type.

I mean, he’s nice, right? But why would I let that stop my blathering?

“I promise, I’ll just sit over here with my face in my phone the whole time!”

Ok, is that something a normal person would go out of his way to say? I think it’s just me. Or other people who similarly just can’t get out of their own way.

But it’s funny because I think that’s exactly the type of thing I’m learning I shouldn’t say because I think it sounds funny or charming in my head. The reality is probably – once I say it – that people think, “What is wrong with him?!?”

Wow. This post folds so many of my normal writing themes into one entry:

Why I’m single – reread that exchange if you’re confused.

Red Shirt Diaries – because I’m talking to strangers in bars…it’s a wonder I’ve made it this far.

Dating Into Oblivion – because, Bachelor #0…

And, the winner…Today I Learned – maybe don’t talk so much, Galby.

But this all started kicking around my head yesterday when I ran to the market. I knew to put on a jacket because it was high 40s, but once I got outside I thought maybe a scarf would be nice. That’s when I noticed the – yes, my type – UPS guy walking toward me in shorts.

“Gurl, how are you surviving in shorts today?!?”

Now, not that I profile, but.

Still, maybe “gurl” is a little too familiar for initiating a pass-by conversation on the street.

Luckily, he looked tickled by my friendly and playful question. As soon as I heard what I said, I expected any other response, so…dodged a bullet there. And before you all go typing “Missed Connections Portland” into the Google, he was just amused. Hehe. Still…what a cute story that would be.

That interaction made me recall an online conversation from a few days prior. I’d been chatting with this guy on Twitter and Arianna Grande’s new song came up. 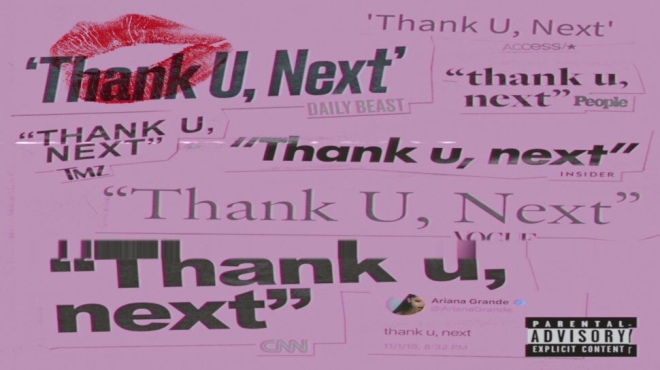 It’s called – in case the subtlety of the picture above didn’t whack you over the head with it – Thank U, Next. It’s about the gratitude she feels for each of her relationships because they are learning experiences for her. Basically, she’s no T-Swift and didn’t write a takedown song about her ex.

But where I said something I shouldn’t was when I dumped this little gem onto the Internet:

“Maybe from Pete she learned not to get engaged after a few months of dating only to end up dumping the guy a few weeks later.”

Here’s how that went over…the guy didn’t even reply to me! Ok. That’s fine. Have strong feelings about pop singers.

What surprised me was the message I got from the Twitter that he’d blocked me.

Well, that is a strong feeling indeed!