Several months back, Big Word Ben gifted me a much belated birthday present: tickets to the 2018 Fleetwood Mac tour.

Not a bad gift, right?

There was much scandal and speculation about this tour, dubbed An Evening With Fleetwood Mac, after it was announced that Lindsey Buckingham would not be touring with them. Point in fact, the rumor mill – oops, rumours mill – was reporting that he had been fired from the group.

The rumor ripples of this announcement were fast and choppy. Buckingham is their male vocalist as well as lead guitarist. The last time I had seen Fleetwood Mac he had easily done over half of the vocal heavy lifting.

Christine McVie had just returned from about 15 years of retirement – at 71! – for the last tour and was easing her way into the band’s routine last time around, so it’s not like they aren’t used to changing up the batting order for their shows.

Still, as the “young one” in the band – he and Stevie were ~66 last time the group came through Portland – he had been the real mover and shaker on stage. Stevie did her trademark twirls, but for the most part, her dancing was in place, usually with her feet planted and just consisted of some pretty wild upper body gyrations. Lindsey, on the other hand, had been out to make a point. Jumping around stage like a flea and spinning, squatting, kicking with a true frenzy. It was kind of annoying since it looked like he was showing off to some degree, but also made the show a real visual presentation.

So, what’s it going to be like in 2018? Lindsey and Stevie are both 70, Lindsay isn’t coming, Christine is 75, John and Mick are sitting pretty in the shadows at the back of the stage, as usual. Well, except for Mick’s crazy audience shout-back solo at the midway point. For the record, that was and is still a pretty amazing part of the show.

Filling the bill and rounding out the band, it was announced that Mike Campbell from Tom Petty and the Heartbreakers and Neil Finn from Crowded House/The Finn Brothers/Split Enz would be taking on the guitar work and male vocals.

I was left quite curious whether this would still be a really heavy male vocals show, though. Newcomers notwithstanding, the band ended up leaning on Christine for what I would call about half of the vocal numbers in the Portland show. Now, there’s a reason she was not the primary vocalist in the band in the first place – but as much as I’ve always loved her one or two numbers on each album and even her solo work – at 75, you could tell her voice was getting tired during the two hour show.

But keep in mind, that’s about half the singing in a two hour show…down from a three hour production with Lindsey.

I was ok with the shortened show, because I’m older, too. A three hour show starting at 8 PM makes me tired just thinking about it.

Plus, as it turns out, in addition to Christine leading the vocals charge, the band also chose to steer fairly clear of the Buckingham library. For the most part. Neil did some great lead solo numbers as well as sharing some duets with each of the ladies.

The show ended up being a walk way down Memory Lane, for the most part, though, with a great deal of what I would call deep tracks from the Peter Green era of the band. 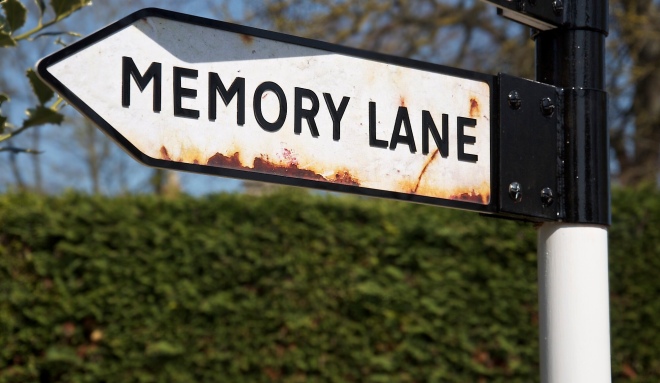 I was fairly impressed with the band’s effort to acknowledge the stand ins for Lindsey throughout the show, too. It wasn’t just a “hey, here’s these guys” type of situation. After Mick’s World Turning drum solo at halftime, he came to the front of the stage and talked about the next number. It was a song, he said, “that he heard at a time he needed to hear it”, which was an interesting turn of phrase. I was pretty surprised when he went on to introduce Neil to sing Don’t Dream It’s Over, arguably Crowded House’s biggest hit. It was actually a highlight in the show for me as an audience member and as a HUGE Crowded House fan. 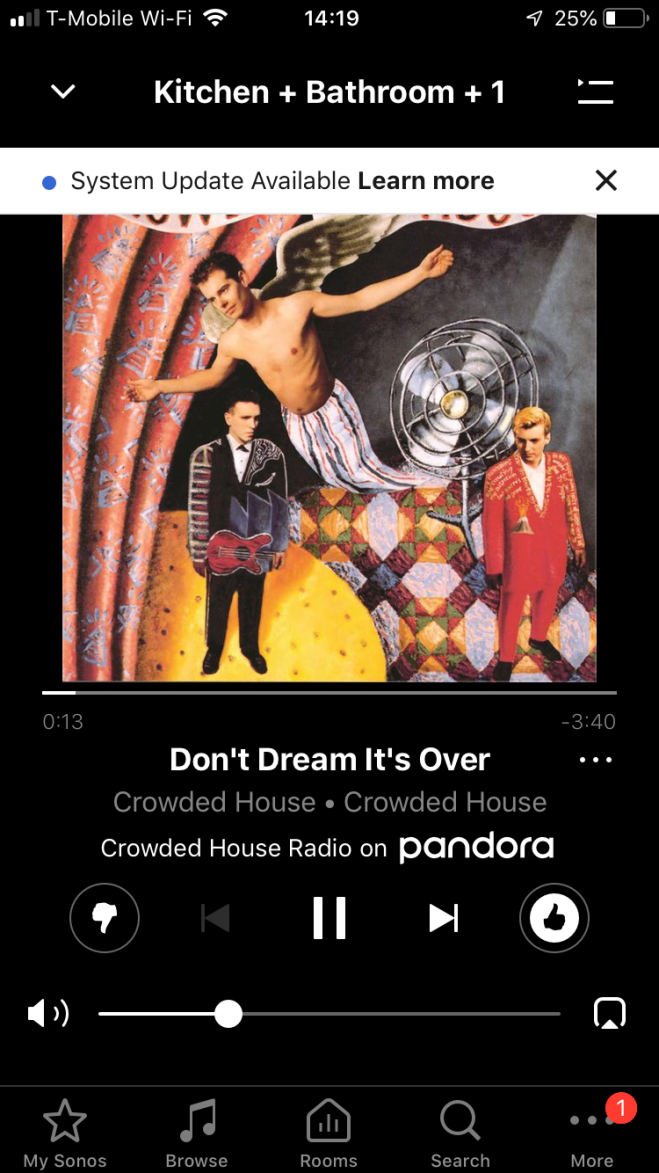 Big Word Ben seemed to know about this number in advance and warned me, “Just wait until the halfway point”, which I didn’t fully understand until Stevie wandered out onto the stage toward the end of the song and joined in.
It was exciting. Hearing these two voices working together to recreate something I was so familiar with. Until Stevie basically fell off the stage trying to keep up with Neil. He’s only ten years her junior, but it demonstrates the truth behind the old adage about teaching and old dog new tricks. After the number, she kind of joked about her effort, but it was just super unclear whether she forgot the words or if she just got lost.

Here, have a little levity that I found in my Google suggestions while digging around for pics and info for this entry: 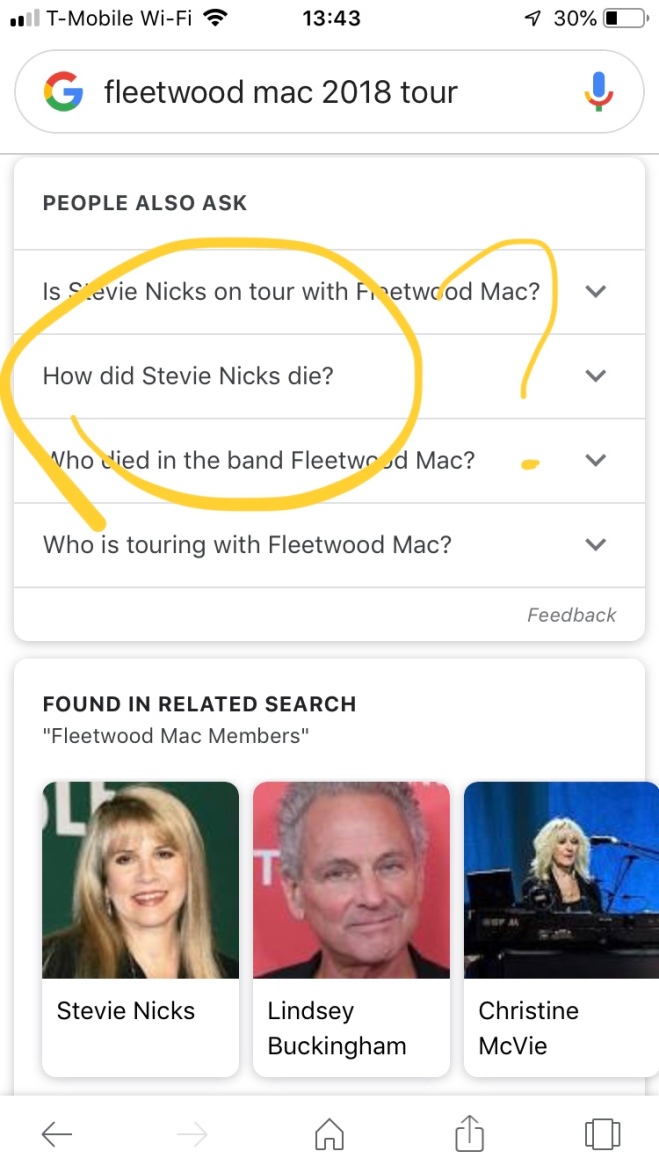 My answer to that question:

But I am still one to give an E for effort, so I was ultimately happy that they had at least tried to integrate the newcomers.

The back half of the show included a bit more visibility overall for Stevie, so it was good that she had an opportunity to redeem herself after the Crowded House number. Again, though…at 70, she’s not so much the twirling hippy girl she once was. You could tell that her dancing was more an exercise in remaining upright versus it’s former lost in the moment self. The same was evident with Christine when she left her keyboard and came forward for some maracas work during a solo number of hers. Both were very stiff hipped in their movements, which I noted, before immediately reminding myself of how I must look when I get off the couch to pee during a Netflix binge. Yeah, “Shut up, Me”. Both get high marks from me for just showing up, that’s for sure!

We got to the end of the show, with the band being led off the darkened stage by stagehands with flashlights…gotta be careful to not trip on a wire going across the equipment-packed stage. Hips are expensive!

People immediately started leaving as soon as the lights dimmed. Big Word Ben indicated that he didn’t think there was an encore, either, by way of explanation. It’s rare to see that many people take off after a curtain call. Usually it’s just the competitive drivers or people who have to work super early. This audience was moving. We were soon the only people in our immediate area. We chatted briefly about the show. How the set list was so different without Lindsey, but both still glad to have added another notch to our Fleetwood Mac Concert Belts. Mine is nowhere near as long as his, but he’s got a few years on Neil, so I chalk it up to him just having more opportunities.

All that said, I certainly didn’t feel robbed when the lights came back up and the group returned to the stage. Quite honestly, when Freefalling started, I felt like the show was just made. What a perfect way to ice this cake. Stevie nailed a rendition of one of Mike’s former bandleader’s biggest hits while a slide show played behind the band. It showed lots of concert pics of Petty, who had died just over a year earlier at only 66. It was also a very poignant reminder of the connection between the two bands. Mike Campbell joining for this tour was the top of mind connection for most, but then there was the Leather and Lace duet between Petty and Stevie, too. The picture show behind the stage reminded us all of just how much history there was with Stevie and Petty touring together over the years. I think most of the people left in the arena ended up pretty choked up by the end of the song.

At the end of the show, we were left with quite a different Fleetwood Mac experience. We were able to get a good debriefing in during the walk down to Old Town, were BWB had parked. Old Town is just a hop, skip and river from the Rose Quarter and at 10-ish at night a 15 minute walk over the bridge versus waiting to exit a parking garage for who knows how long or even waiting to board what were overflowing MAX train cars for a one-stop ride over the bridge. We talked about everything I discussed above and both agreed that different or not, it was still easily worth going.

The one thing that surprised us both? The show was billed as starting at 8 on the tickets, 8:15 on the Rose Quarter website and by golly, that show started just as we found our section at 8:15!

A rock band starting on time? Yeah, these guys are getting to a point where bedtime is important. But they still deliver a show worth seeing!

6 thoughts on “Going Their Own Way…”