I went to a movie yesterday.

Mary Poppins Returns…highly recommend, Charlotte, as if you haven’t already seen it! But anyone else that loves a good, family friendly story that’s dripping with nostalgia…go see it! If you also like crafty, half-marathoning, Disney loving new moms, then click on the link to check out Charlotte’s blog. It’s like checking in with an old friend, that you just met.

Anyway, The Fox and I enable one another for a drop-in to the good old local for a Pallet Jack on the way home. It’s a moral imperative, I tell ya. If Peej is on tap, I’m stopping in!

All this is to say that after I left the house at 345 for a 415 movie – after giving Myrt her midday snackety-snack – and have myself the teensiest of tasties on the way home…it’s 715. Myrtle’s 6 PM dinner is late!

That cat greeted me at the door like I’d just come home from a solo trek across Antarctica. Sure enough, in the extra 75 minutes, she’d finished her breakfast kibble, which she doesn’t normally do, and reverted to a near-feral state.

Fifteen minutes of smacking later, she’s meowing at the door to go play in the hallway. Since getting a new neighbor a few weeks ago, I’m reluctant to let the Missus out into the hallway as often as I used to when it was just me and “another” old lady living on the floor. I don’t know why, I prop the door open for Myrtle while she’s in the hall putting the laying in playing and she runs in and under the bed when the elevator lifts off of the first floor.

30 minutes later, I’m texting a friend and I hear the distinct sounds of impending disaster.

First, Myrtle has a history of false alarms. More often than not, a few hacks sets her right.

Second, on the half dozen times she’s hurled since I’ve been holding her hostage, it’s that rawlp that signals real trouble.

I get up and look for the chunky puddle.

Nor, it seems, I’d my feline overlord. It had sounded like she was by the utility room…

I open the cracked door and Myrtle looks up at me from the doormat next door, her expression inscrutable. No barf.

Maybe it was a false alarm.

Breathing a sign of relief, I give her a distrustful look and turn to go back inside.

Something in my peripheral vision makes me stop. Sure enough, 20 feet away, there’s a clump puddle trying to decide what to do.

To her credit, she went to her office, located somewhere in the box springs of my bed, instead of supervising my clean up efforts. Unlike the close oversight I get when tending to her litter box.

Speaking of the Missus and her box of poo.

I know cats cover their waste as a generic throwback – or reminder – to their days in the wild. Covering waste is covert, so others don’t catch their scent. Like you when you use the bathroom on another floor at work to poo – you know who you are.

Anyway, my defective cat…she endeavors to cover her waste. I guess. If by “cover” you mean scratch around at everything near your box versus simply pulling litter over the waste and – y’know…covering it. I’ve watched this supposed superior being scratch at the wall behind the box, the chair or table legs that the box is under and the floor outside the box.

The closest she’s gotten is scratching at the lip of the box. Unfortunately, since she was scratching with one paw and balancing her svelte self on the lip with the other paw, so only succeeded in covering her poop inasmuch as tipping the cat box over and burying it under an avalanche of spilling litter counts.

But these are her “Aaw, poor kitty!” behaviors.

She has never been a real affectionate cat. Playful is not her thing.

I nicknamed her Murderous Myrtle and The Mistress Myrtle for a reason.

This is our fourth year together. Each year at Christmas, my sister gets Myrt a gift, as she does for each of the family dogs. Usually it’s a crack-version of a treat, which Myrtle loves, and a catnip toy…which she pretends is trash.

Still, every year, I give it the futile college try. A little ignored encouragement and then into the closet it goes.

It might have just been the trauma of going into the kitty carrier and a 40 minute car ride. Or the DMZ meeting of my parents’ chihuahuas in my upstairs guest room – Myrtle has never traveled anywhere previously with me but the vet. But this year, the catnip toys got a little attention. At first, it was just a few

…swaps after she emerged from under the bed. But then I caught her laying on her side, hugging one between her front paws.

I took some of the loose cat nip and sprinkled it on the carpet and she came over, sniffed at it, sat on it and then flipped over and rolled in it twice before skulking back under the bed.

At home, I have no carpets. She diligently destroyed my one and only favorite all time carpet years ago. I think this is why she loves the neighbor’s doormat so much. Anyway, I tried sprinkling some loose catnip on a dish towel at home for her. Sure enough, she luuuuurrved it. I’d even catch her running to the towel and planting her front paws on it so she skidded across the floor, gliding on the towel.

Until one morning I come back from coffee to find that she’s successfully covered a poop in her box with the dish towel.

Still, this is all just inane cat weirdness, right?

She hasn’t put me on my face in two years. That’s saying something!

Or, maybe she just hasn’t succeeded in tripping me…and I’m hardly one to assume the worst.

However, a couple weeks ago…it was 3:40 on a Sunday morning. Billy Joel, this wasn’t, no regular crowd…just insomniac me, watching the Netflix.

And the Murderous Myrtle.

Knowing nothing of the prophet Billy Joel and his song about people being alone together, Mistress Myrtle had just climbed into my lap.

Climbed might be overselling it. She’d scrabbled over the far side of the coffee table, using my ankle for purchase; been freaked out by my cry of pain and jumped onto the back of the couch, landed on my shoulder and connected the claws of three paws with my tee shirt clad flesh.

I’m not sure I could capture the double tracks on my shoulder without also exposing more side boob, chicken wing or Dunlap than I care to admit to. But on the plus side, my ankle looks way thicker than its usual Chankle (chicken ankle – Chrisism) self.

Since I was trying to get her off of and away from me, she settled on my lap. I sat and bled, fearful of the proximity of her claws to my crotch.

This has now become a part of Myrt’s nightly routine.

630: Whine at the door. Or a kitchen cabinet door. Just whine. 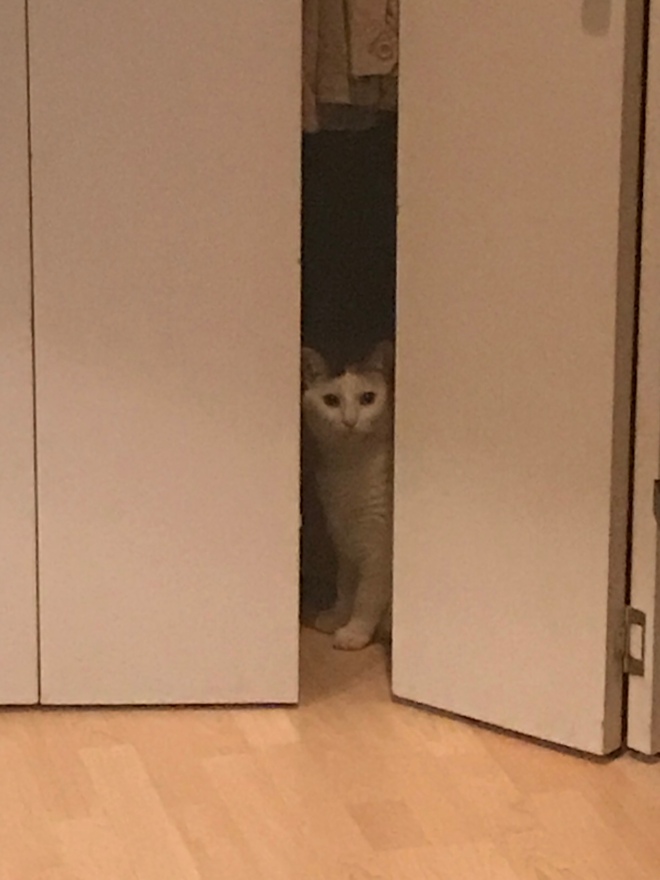 It’s the addition of that 830 activity that has me on high alert. She’ll just come sit by the coffee table and stare at my ankles, like they are singing a hypnotic siren song that only she can hear. When she feels like mixing it up, she’ll sit behind the corner of the couch. I can hear her paws clickety-click-clack up slowly behind me and I’ll turn to see her sitting there, black eyed…

“Don’t you even think about it.”

…and she’s off to the box spring home office.

Clearly, we have differing hobbies. Mine is to cuddle and watch Netflix

Maybe it’s because she resents that she’s not a dog and doesn’t get three or four walks a day.

Whatever, there was a couple of moderately non-lethal years in there. Maybe the dark days this winter are just hitting her particularly hard.

I’m still walking around, so she clearly still finds me useful. Even if it’s just as a cushion and occasional scratching post.

3 thoughts on “Myrt and I Need Couples Therapy”