Also, Diversity: Dux, because I’m a lame ass, Forgetful Freddy and thought that I posted my thoughts on diversity in Hollywood specifically, but entertainment as a whole two years ago!

This was back in September of 2016, after Rami Malek won his Emmy for Mr Robot. Look at all that’s happened for our endearing Egyptian heritaged actor in the two years that my OP gathered cobwebs in my drafts.

PS: he has a twin…named Sami – c’mon, twins named Rami and Sami? I’m dying. But as a striking teacher in LA, now someone else in the family is making headlines! 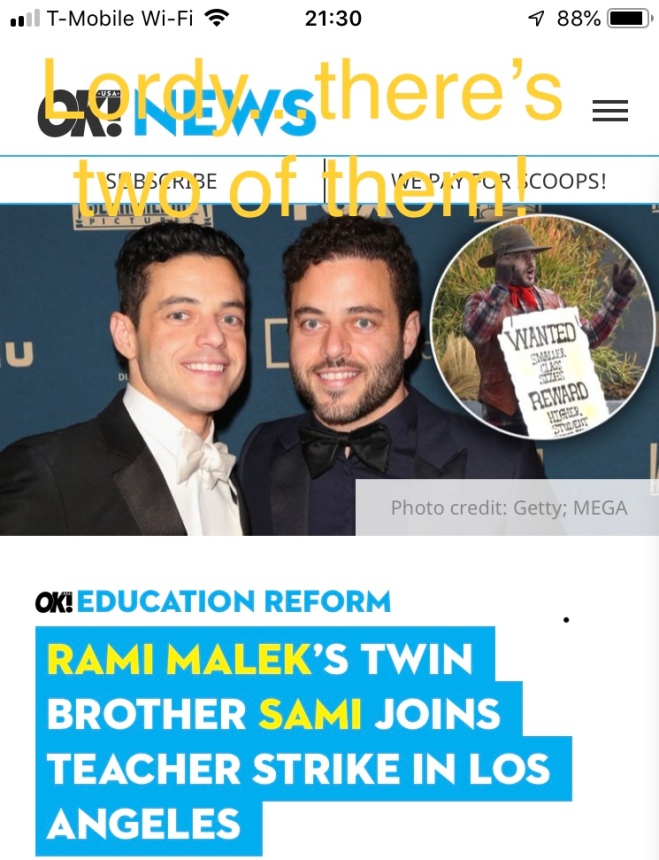 But before you begin thinking that my idea of diversity only extends as far as attraction, here’s a few other bullet points from my 2016 draft:

Laverne Cox and Candyce Cane had both become quite visibly cast trans-actors. Cox for several seasons on Orange is the New Black and Cane on Lucifer.

Empire and Atlanta were emerging phenomenons that showcased largely black ensemble casts. And on the other hand, Jane the Virgin was a soapy sitcom featuring a nearly all Hispanic lead cast and Sofia Vergara was pulling off a major role as a second wife in a mixed marriage on Modern Family.

Modern Family also featured a gay married couple that was presented as basic, mainstream America…y’know, like gay marriage was normal.

All this had me thinking that in 2016, basic white people had just become so passé.

2017 saw an extension of that as the #MeToo movement gave voice to sexual predators in Hollywood, but also empowered everyday Americans to start talking about their own sexual abuse in ways and voices on a scale we had never been exposed to before.

It’s almost like – if one looked at it, just so – squinty eyed and head tilted – we could forget that we had a raging dumpster fire of a human sitting in the Oval.

While he raged about immigrants from “shithole countries” sending us “Bad Hombres” and rapists, murderers and drug dealer, America held Hollywood’s middle aged, white power players to task for their past abuses of their power and their peers.

While he engaged in a do nothing drum circle about a vanity wall – squandering his congressional majority by not forcing the issue when democracy was held hostage by a GOP stranglehold – the entertainment industry continued to publicly call him out on his lack of statesmanship and basic, human decency.

The entertainment industry used its pulpit not to bully, as the President continued to do daily, but to reflect his behaviors back onto him and keep his egregious flaws in the light of day. That’s a fine and responsible use of a pulpit, right there.

I should mention that all the while, Hamilton is still either on Broadway or touring to sold out crowds across the country. For Broadway to send such a cultural juggernaut out into the world…that’s really not something that happens too often. Maybe once a decade you encounter that type of reception for a play in America.

Yet, here was Hilary Clinton, getting a standing ovation from the crowd when she entered the theater to see Hamilton. Conversely, the actors stopped to call our reprehensible vile VP Mike Pence out when he saw the show.

While 2018 started off with a bang – with Black Panther knocking the February box office off the charts – the year was certainly not a lock as far as the trajectory of diversity in our country was concerned. While Black Panther was a strong start, the separation of migrant families at our southern border began shortly after. Children taken from their parents and put in cages without even giving the parents a coat check claim on their offspring.

Black Klansman came to the box office and kinda drowned in its own quirkily presented message. But then, like a beacon, Crazy Rich Asians closed out the summer box office season and laid way for Bohemian Rhapsody to carry us into the holidays.

But even with all of this headline making diversity in our popular culture, the White House was still ramping up for a budget battle for wall funding. The President couldn’t seem to decide if he wanted to replace the Statue of Liberty’s New Colossus passage with a simple “Keep Out” or something equally literary sounding like “Abandon Hope, All Ye Who Enter Here”.

And then we got The 2018 Golden Globes, courtesy of the Hollywood Foreign Press Association. Rami picks up a much expected win for his lead as Freddie Mercury in Bohemian Rhapsody. Even more exciting, I suppose, is the upset win for the movie as Best Picture – Drama.

I thought Bohemian Rhapsody was good, don’t get me wrong! Not outstanding, but I enjoyed it. Malek was surprising in his ability to capture how Mercury’s social insecurities and discomfort manifested in behaviors that ranged from awkward to offensive bravado. I found myself checking my initial response – which was “this is bad acting” – several times and remembering, “oh, yeah…he did act pretty strange in interviews”. I’m glad that people got it.

Soooo, I’m also glad he won a Golden Globe for his work! I’m quite surprised, though, that the film picked up a best drama award. Most of the world seems shocked that the Foreign Press overlooked the sexual misconduct allegations by the director. I just thought there were better dramas in the category.

It *is* the HFPA, though. I can see where a film about a mixed heritage Brit that fronted a worldwide phenomenon of a rock band would score points with them. The Oscars might be a different story!

But diversity at this year’s Golden Globes wasn’t just about Rami and Freddie.

Sandra Oh was the first Asian American woman to (co)host the show – or any major entertainment awards ceremony in this country. Managing to go from a frequent nominee and audience member with only one major win under her belt for her 15 years on series TV

…to host of the show while also doubling her recognition with her lead actor work on Killing Eve.

The snarky observationalist in me wants to say that white actors were so rare in this ceremony that we only managed to sweep the achievement awards. We even had to make up a new one to pad our numbers!

Jeff Bridges was awarded the Cecil B DeMille award for his lifetime body of work in film. His family certainly has the pedigree to back that up. Father, mother, brother and wife of 45 years were or are all in the industry. Watching him receive his award made me a little nostalgic, though. I miss the days when old, white actors won awards and did one armed push ups on stage to remind us they mattered.

That new award I mentioned? The HFPA decided that their awards – presented to equal categories in Film and TV – lacked an achievement award for television to balance out the Cecil B DeMille award for film. They created the Carol Burnett award to balance those scales. Naming an award like this that will become a legacy that recognizes a seven plus decade career after a woman was another heartening sign from Hollywood that diversity was welcome in their industry, even if the country was still schizophrenic about the subject.

Miraculously, they managed to not fuck that action up by awarding it to a man on its inaugural presentation. It was kind of cute to see Steve Carrel spoof the slam dunk nature of the award – since recipients are told ahead of time – by reading off several male nominees along with Burnett. Even cuter was the camera cutting to her backstage with both hands giving crossed fingers as she waited for the winner to be announced.

Let’s just give Hollywood and the entertainment industry a deserved pat on the back for both inclusion and self-policing. The GOP could learn a lot from their example over the last few years.

And Rami – or Sami, or both…I could make an exception to my Puritan ways – if we ever cross paths on the street…I’m running you to a corner store for some beer and then we’re gonna get to work proving that old adage about the difference between a gay man and a straight man…

Now, onward to the Oscars!