I feel that familiarity often.

Sometimes it’s fun…a cute guy that looks familiar. Caught off guard between the “did we?” and “shouldn’t we?” mindset.

Less fun is what I woke up to Monday morning and again, to a lesser degree, this morning.

Other times, it’s because of what I woke up to Monday morning. A less pleasant deja vu, to be sure.

But because waking up is tricky business, it’s not like I snapped my fingers and had an a-ha moment either time. No, that came later after I woke up from accidentally falling asleep again before getting out of bed.

Hey, I told ya…waking up is tricky.

This morning, I woke to an email the Silver Fox had sent about a Netflix documentary dropping next week about Ted Bundy. I’d forgotten that one of Bundy’s victims had been abducted right outside of The Fox’s dorm when he was at OSU.

Y’know, I like that we’re having to work for Oregon-ish murder stories.

Then I read the article he’d sent in a blithe ignorance that was miserably short. As I read, I remembered Sacha’s aunt, who had been a juror on the Westley Allan Dodd murder trial. As if being a juror in a spree murder trial wasn’t bad enough, she was further traumatized by the experience of knowing Dodd had chosen hanging as his form of execution, so she was literally charged with sending a man to the gallows.

Before I finished the article, I had a further thought on Oregon’s dearth of murder sprees.

For the record, I think that’s a great thing. Sadly, as I was wracking my brain to remember the name of probably Oregon’s most infamous family annihilator, it hit me.

Oh, yeah. We had one Sunday night. Fuuuck.

That depressing realization linked me to Monday morning coffee with The Fox, when he asked if I’d heard about it.

Saw it. Didn’t read the story.

He told me that someone had killed his girlfriend, their infant child and his own parents near Woodburn. We somehow agreed that it was a shooting.

Pretty sure that he geolocated it as a Woodburn incident ahead of my job interview an hour later at the Woodburn Outlet Shops. Crafty.

We go back to sipping our cold brew and nosing deeper into our respective phone screens.

Aaaaand, welcome back to Stabbytown!

I actually raised my arms in mock surprise at that revelation.

And there I was in bed this morning too depressed about these two too weird facts about my home.

– Portland is prone to expressing itself with sharp objects.

– Oregon’s suicidal population has a “tendency” to wipe out every genetic thing associated with them when they pass themselves away. Because suicide is for quitters. Our family annihilator tend to be of the mindset that they should clean up after themselves before they go.

Writing is so surprisingly therapeutic. I think I just figured out why I fell back asleep.

But the brain is a strange organ, though…once I remembered Sunday’s bloodbath, I just started ticking off annihilators in my mind.

Christian Longo, incidentally. That was the most famous of Oregon’s family annihilators, who killed his family in Lincoln City, OR back in ’01. Hrs in jail now, having fled the country after his crimes versus suicide or death by cop…like a real Oregonian, I guess. He was originally from…Michigan?

Anyway, it’s not like there was a huge gap between this past weekend’s axe hammer wielding Mark Gago and Longo. There was one last year, another from 2017 comes to mind and then I’m kind of happy to say I can’t place another until ’02 or ’03…a dubious pleasure. I worry there were plenty but I was just less attenuated to them because I was living in Seattle in that time frame.

While the Longo murders stick with me not just because of the sensational nature of the crime and the international pursuit. It also marks my awareness of the family annihilator phenomenon. That awareness was heightened because shortly after learning about the existence of these family killers, I learned that the PNW has the highest occurrence of them.

That made me sad. It hurt my hometown pride. I think the Pacific Northwest is amazing. I love living here and when I don’t live here, I’m proud to be from here.

Then there’s these clowns.

I don’t need these guys murking – made up word alert! – up my hometown pride.

Let’s keep the focus on our natural wonders.

The beer and wine!

As I was rallying myself with that list of what’s great about my homeland, it hit me.

And suddenly last Summer’s tragic standout came back to me.

They actually standout for a lot of different reasons. The annihilator (or annihilators) was a woman, not a man.

The family was headed by a lesbian couple.

The children were adopted. 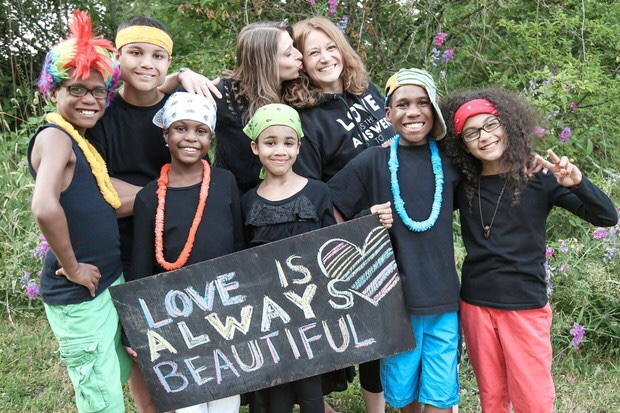 And they were somewhat famous before the coastal California car crash that killed at least six of the eight in the family. As of a couple months after the crash, I knew that Devonte Hart and one of his adoptive siblings were still missing, but presumed dead.

Devonte stands out because he’s the kid from the hug heard round the world. At a post-Ferguson march here in Portland, Devonte had been spotted carrying this sign 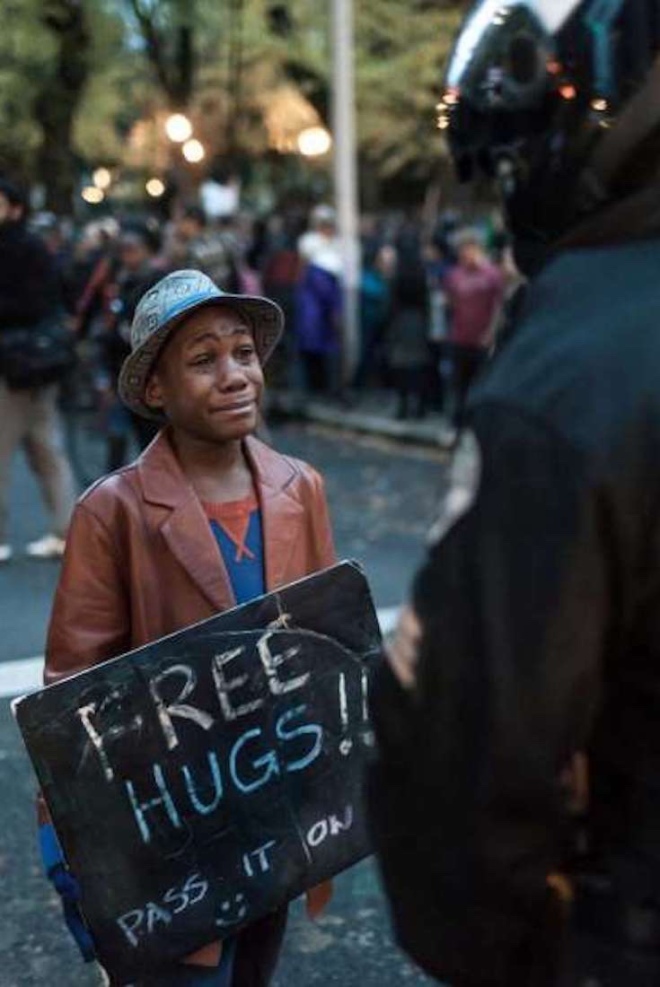 What a classic Portland hipster outfit! It works on kids, they don’t overwork the irony.

I admit that I became immune to the details of the Hart Family Crash. The kids bodies that were recovered showed that they were drugged. At least one of the mothers was intoxicated.

What happened to the two kids that were not recovered? In the back of my mind, someone is screaming

Lost at sea, you idiot!

But the middle part of my brain is thinking he’s a modern D.B. Cooper…a crimeless and innocent version of our folkish hijacker.

9 thoughts on “Welcome (Back) to Crazytown”