Someone called me out the other day when I blithely mentioned Portland’s weirdness factor. As if to say that every town is weird or something.

Sure. I’ll grant that point.

But with Portland, it’s a matter of magnitude.

We, the weird People:

There’s a homeless guy in a wheelchair that I see from time to time boxing with a newspaper machine. And bitching it out…I think that one of them needs out of that relationship.

Last summer, I saw a fella walking down the street using his prosthetic leg as a cane. I’m pretty sure prosthetic limbs are easier to install than IKEA furniture is to build, but this guy wasn’t having that. Maybe it was uncomfortable to wear the prosthetic because of the heat. It’s not like a shoe, where when it’s hot you can wear sandals. This might have been his work around. Lest you get the idea that I was too polite to snap a pic, worry not…my camera phone reactions are just too slow.

But maybe I’m a little too polite…

We are (were) voted the kinkiest city in America back in 2017. 2016? I dunno, it’s been a while since I’ve heard mention of it in the press. I don’t think it’s like the census and only done once a decade, so I’m sure someone has given us a run for the title since then. A “Hold my beer” moment, if you will. Then again, it’s not like I’m seeing less kink/fetish-type behaviors. There’s still (way too many, IMO) open relationships…like every time I meet a nice guy. Don’t forget Naked Pool Night, either – more on that later. I really can’t tell if that’s a kink or just plain old weird. To me.

Our homeless population. Nothing to brag about, but they are a semi- community unto themselves: from supporting one another in little gab-fests to flat out fucking in parks to the weekly potluck in the middle of one of our swankiest neighborhoods…mine.

Depending on who’s statistics you use, there could be ~16k to a high of 25k homeless people in Portland. Again, depending on the source, that could be anywhere from 3-7% of the population. Wanna have your mind blown? Portland’s black population is 6.3%. Basically, our homeless population is either half of or slightly more than that of its black residents.

We’re 72% white here in Portland…maybe that’s how we ended up so damn kinky. Overcompensating.

If these homeless folks ever organized, they’d be one hell of a voting block. But keep that quiet. The sad reality of mental illness in the homeless community being the sad reality that it is could work against us and Portland doesn’t need its own homeless version of Trump. It would probably end up being the newspaper machine that I always see that wheelchair guy boxing…

With the weird Places:

Have you ever seen a grown man naked? 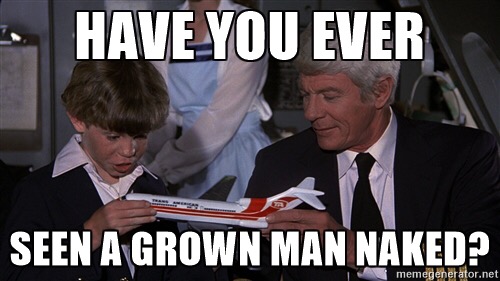 Then you’ve clearly never had a beer at a Portland bar. I think being able to have a stripper within three feet of your drink is in the top five reasons Portland is weird. To be fair, there’s only two gay male strip clubs, although you’re bound to encounter randomly occurring go-go boys at some of the others. However, our straight strip clubs, well, it’s almost like 7-eleven can’t find a good corner location here. That’s how many strip bars we have. It hits pretty close to home, too. One of the Silver Fox’s neighbors owns several. I think it’s about five. That’s a lot of breast meat.

But, then again, the frequency in which one encounters random naked non-strippers is weirder to me than naked dancers. Call me crazy.

One of Portland’s more regrettable – wait…forgettable? Meh, take your pick – gay bars is The Eagle.

Eagle PDX? I forget. This bar used to be at the top of Vaseline Alley. I’m pretty sure it lost its lease, but whatever the cause, it shut down. Eventually, it relocated to North Portland…for no obvious good reason. During that transition, our Portland bar lost its affiliation with Eagle International and that’s why there’s name confusion.

Anyway, it’s a gay bar that caters to the leather community, so it draws its own clientele but also has drop-ins that one would call mainstream. I dunno…maybe there’s an occasional neighbor that walks in thinking, “Ooh, a beer!”, but I’m pretty sure that would be a one time (mis)adventure.

Especially if they wandered in on Naked Pool Night.

I know it’s on a Thursday, or possibly Thursdays. Not sure which, but the first time I found myself there for – no…on – Naked Pool Night, I quickly added “pool” to the list of activities that should not be done nude. It joined frisbee and volleyball, if you were wondering. Sorry, Roger!

And, finally, the weird Things:

How about the largest entry into the annual World Naked Bike Ride. Yup, right here in good old PDX! Our event has grown to over 10k participants. That’s a lot, even if you convert it to the metric system!

But our weirdness isn’t all about homeless folk and naked peeps. (See what I did there?)

We are the only city to host Red Bull’s Flugtag Festival three times. I’m not sure of the first year we hosted, but we also had them in 2015 and lastly in 2017. 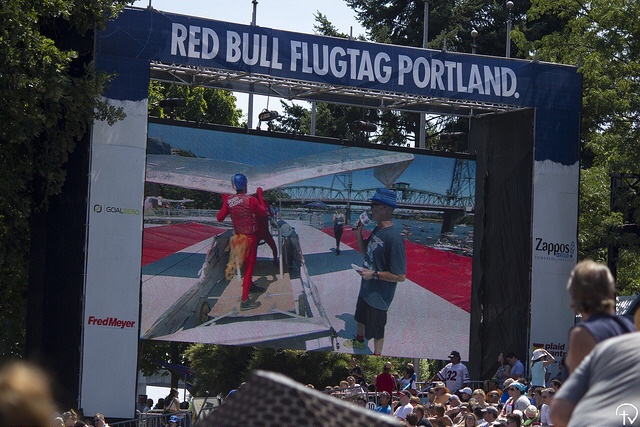 Looks like kind of a big deal, right? That second pic is from 2017. Sadly, that will be our last time hosting. The crowd gathered on the river in small watercraft (ie: paddle boards, canoes and improvised floats) proved too frustrating to the captain of our local booze cruiser, The Portland Spirit. Tired of waiting, he proceeded to pilot his ship through the assembled flotilla. But he blew his horn several times before doing so. Apparently, our politeness at intersections does not extend to our waterways…

But what is it, you ask?

Well, it’s a party, don’t get me wrong. But it’s dressed up as a modern day soap box derby. The challenge is to create a self-propelled flying machine and then you’re judged on how far you get, but also flair!

Mostly, it’s an exercise in gravity. 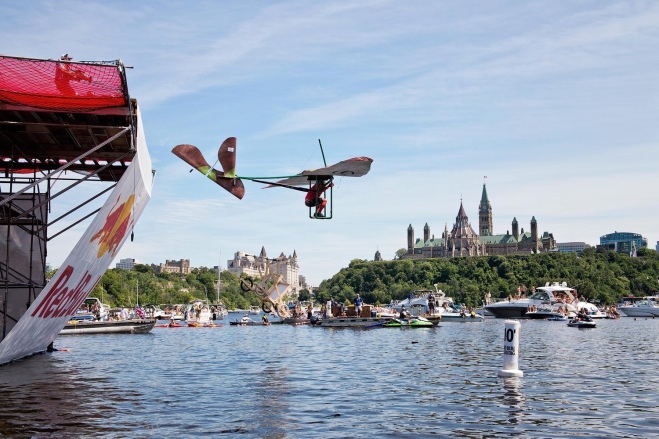 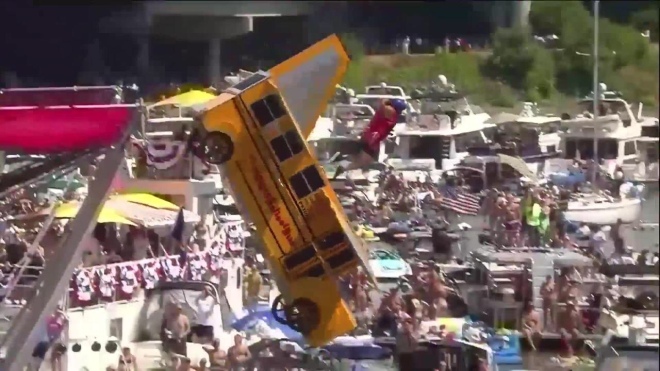 But it’s ok…it’s held on the river, so as long as you can tread water, you’re ok. Probably.

Speaking of alternative transportation, it is a big part of our commuter culture. Sometimes, though, I feel like we are just going out of our way to be weird about alternative transportation. I love the mass transit, personally. I have been a bike commuter. But we just reached an agreement that will allow for a second, longer test of the e-scooter program that plagued most and thrilled a few last summer, too. So we have emerging alternatives. Far be it from us to rest on our laurels.

Then there’s this guy

There was a minute a couple years back where you could encounter those hover boards on our sidewalks…I don’t see them much any more. That leaves more room for skateboards, longboards and that motorized one wheeled version – I think that’s still considered a skateboard. But it is a toss up as to whether our skateboarders opt for the sidewalk or prefer a traffic lane. To me, it’s equally nerve wracking.

I’ll accept that we may have stolen Austin’s “Keep Austin Weird” slogan – see how I phrased that? I’ll accept it but I’m not guaranteeing it’s true…

That said, you’ve got to love how we made it our own.

Some of that success was just attracting specific groups of people that are collectively weird. I think our little slice of the west coast was a safe haven for any and all weirdos between LA and Seattle.

But then we’ve got our unique individuals that propel us further into the weirdness stratosphere than any group of people could. 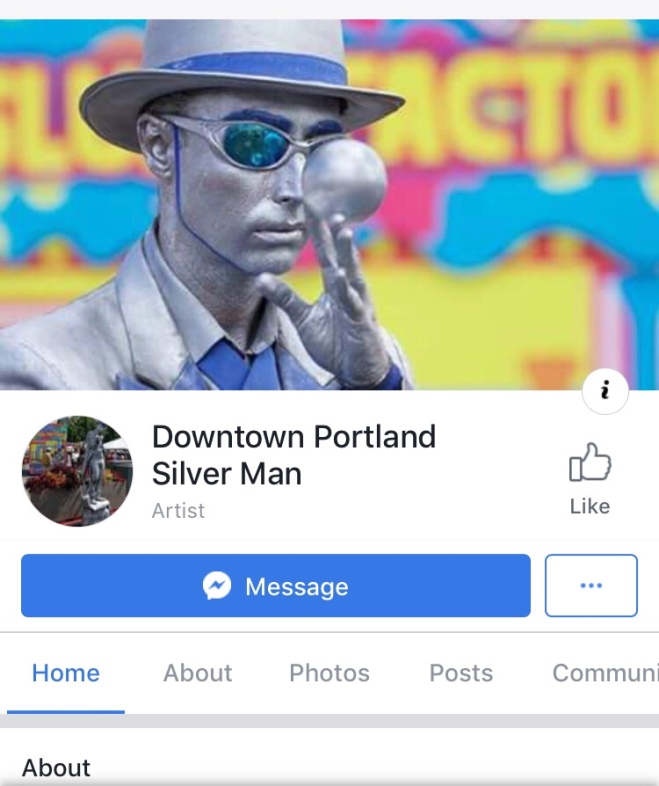 …because your weirdness needs it’s own Facebook page. I know I’ve got a better pic of Brian Kidd – aka: The Unipiper – but you can’t beat the Keep Portland Weird mural in the background.

And our weird people do things! This is former two-term mayor Bud Clark.

Before becoming mayor, he owned the Goose Hollow Inn, a shitty little dive bar. Actually, he started the bar in 1967 in an area that would later be named after the bar itself. Prior to the bar opening, this neighborhood was just part of the SW quadrant of the city. Eventually, it grew up and became known as the Goose Hollow neighborhood.

But that’s not what he’s most famous for, in my opinion. He’s also this guy!

Plus, just about every time you put a microphone in front of him, his first words were whoop.

Speaking of mayors – and not that being gay is weird, but another of our former mayors is Sam Adams. He’s notable for being the first openly gay mayor in the 30 most populous cities in the country. Sadly, he’s also notable for the alleged sex scandal with an intern that was under 18. This prompted the joke:

Why is Portland a cool city to live in?

Because it’s the only city in the country where an 18 year old can get a Sam Adams.

But we’re Portland, as long as you’re recycling, composting, raising urban chickens and not assuming anyone’s gender…you’re welcome to join us. After all, the Fonz can’t have all the fun!

5 thoughts on “The Portland Challenge”