If it does (it won’t) I just want it on record that too much of a good thing does not apply to food!

I made the ribolitta recipe that I came across this morning for dinner.

It was delish! Not bad for a vegetarian dish. I’m pretty sure this recipe could be converted to a full on vegan dish by removing the cheese and choosing a vegan bread.

This dish has a mirepoix base – diced onion, 2 celery stalks and 3 carrots – sautéed in 3 tbsp of olive oil with 8 crushed cloves of garlic. Of course, I used more garlic…just a hint!

While the mirepoix softens, drain a 28 oz can of diced tomatoes – saving the liquid for later. Once the veggies reach your preferred softness, drop in the tomato solids and sauté them with the mirepoix for a couple of minutes. This caramelizes the natural sugars in the tomatoes.

As those sugars are heating up and getting tasty, drain a 14 oz can of cannelini beans. After a few minutes, drop the cannelini beans in and add the liquid from the tomatoes. Spice it up with some red pepper flakes. The recipe calls for 3/4 tsp, but I say go nuts. You know your preferences. Then add four cups of water and bring to a simmer.

You should also have a small hunk of parmesan cheese to grate over the top when serving. Cut the rind off that and just drop it in when you add the water.

You’ll never see it again…but you’ll taste it in every spoonful!

While that’s coming to temp, cut the leaves off of 2 bunches of dinosaur kale. You’re going to rip these into 2″ hunks and drop them into the soup in two batches. What I did was remove the spines from one bunch while my soup simmered, then added them in, letting them wilt while I prepared the second batch. I ripped those into 2″ segments and added them in once I finished them.

As that second batch was wilting, I got ready for my last steps. I cut a loaf of rustic bread in half and then ripped it into chunks while my oven preheated to 425.

When I finished ripping the bread up, I added about one-third of it to the soup and stirred it in. Then I ate a slice of bread while the oven finished pre-heating.

Once the bread had softened in the soup – about 5 minutes – and the oven was ready, I put the rest of the chunked bread on top of the soup and gave it a good drizzle of olive oil. Then I put it in the oven for 15 minutes with the lid off so the bread on top could really crust up. I checked it at 10 minutes and decided to leave it another 5.

While I waited on that, I was grating that parm and buttering half of the rest of my bread, about a quarter loaf. I figured that I’d save the other quarter for left overs.

You can see what this looked like when it came out of the oven up above. Here’s what it looked like plated and topped with cheese. 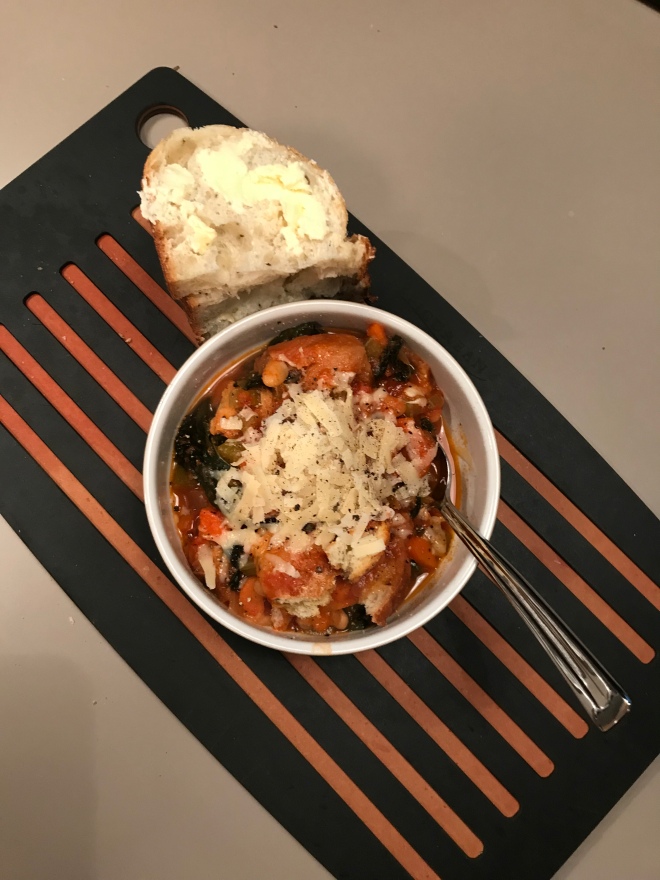 I had two bowls. That filled me to bursting.

Like I mentioned earlier, I read this in an email from Bon Appetit this morning. If you don’t subscribe…I recommend it.

I took the magazine for about five years, maybe longer. Now that my subscription has lapsed, though, I still get emails such as the one this morning.

If you aren’t keen on paying for magazine subscriptions, keep an eye on the promotions Sur la Table runs. They usually do a B.A. give away twice a year. Well, it’s a “gift” with a $50-ish purchase. They might not do it any longer, though. Or maybe you’re just impatient. If so, a subscription is only $15…and well worth it, IMO.

Plus, you get a free tote. Hehe.

Can you believe I don’t get paid for that? I’m just making it easy for you! Honestly, it’s one of the funnest magazines I’ve read. I’d just flip through it for inspiration.

This was my first time making this dish. The only thing I did ahead was dice everything for my mirepoix. All of the other prep stuff I was able to complete between steps. Plus, there was time to wash the tools I used as I went, too.

I started this at 3 o’clock today and had sat down to some Twin Peaks at 4:20 with a beer and a piping hot bowl of soup.

Not pictured: a clean kitchen behind me!

I know the flavors in this dish will just get better as it sits, but you know me and leftovers! I’ve probably got three more servings like the one pictured above. Since it’s Italian, I bet I can muster up the enthusiasm to heat this up again and throw some cheese on it…although I’m not sure how the bread on top will work with refrigeration and reheating.

Still, if you have friends – or even one of those family thingies – just invite them over and kill the whole pot on one fell swoop.

Then it’s a party!

If you want the original article, with shopping list, here it is!

Now, if you’ll excuse me, I’m going to go lay on the couch and digest…with another episode of Twin Peaks, of course!