Congratulations if you’ve made it to this point in my life and I like you.

Or even worse (for you) I call you friend. 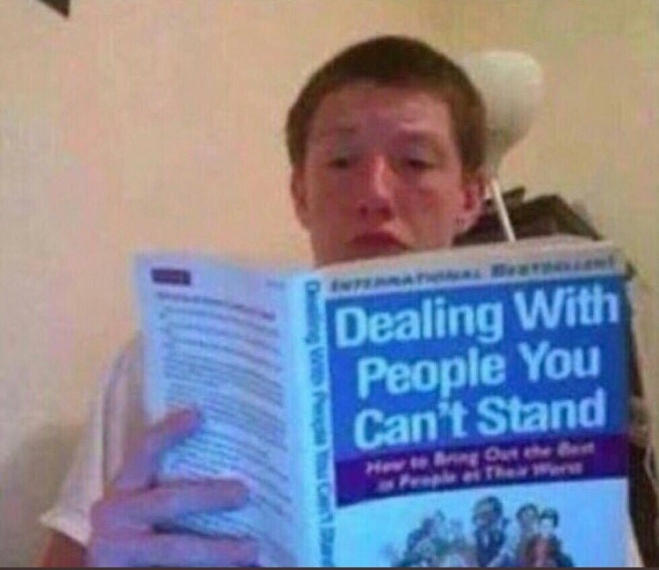 Because I think the “like” department is either out of stock or never reopened after the Partial Government Shutdown.

I started thinking about this a couple weekends ago, after back to back dinner parties. But yesterday, it really crystallized for this old grumpopotamus.

I haven’t enjoyed the company of new people at all for at least a month!

Friday, I had an interview with MudBay. Again. Having breakfast with my parents beforehand, they even seemed caught between optimism and incredulity that this interview process was still going on. To be fair, I started with one DM in November and then got switched to a second in January after nothing happened with the first.

It was fine by me, DM #1 didn’t leave me feeling like she liked me as a candidate. This was after she just happened to be present when I did a drop in with a Store Manager that a former colleague recommended I talk to.

DM #2 and I seemed to really jive during our chats. So I was excited about Friday, even though the pay is pretty meh. It’s still seeming like a company that 99% aligns with what I’m looking for in a company.

So I show up out in BFE yesterday to have what I hoped was a final interview.

DM #1 was unexpectedly in attendance.

Our conversation this time – she did more of the talking between the two of them – seemed better. DM #2 swoops in at the end to say she’ll be calling all the people they speak to in this round by Wednesday to let them know their status. I would hope that means a yea/nay on the job offer front. Regardless, it was specific. That’s way better than the way DM #1 left me hanging after our surprise first meeting.

I’ll call you when we’re ready to move forward with interviews!

Also, I didn’t know this was an interview, so she didn’t have my resume to walk away.

I can find you in our applicant tracker!

By first name? You said you got hundreds of applicants. From a job that posted in June of 2018…and it’s November.

I can search by referral source, since you were referred by an employee!

Plus, she should have said Muddy, since that’s what they call one another.

Well, that might narrow down the applicants with my first name. Assuming she remembered it. Or the Muddy’s name that referred me…

So, while I can at least appreciate that this conversation was a good one, I’m still a little rankled by the Shanghai Round Robin style interview.

Mostly, because I don’t like people anymore, it seems.

I actually got to have a spur of the moment lunch with Little Buddy a few days later while she was in my hood doing errand-type things. She was detoxing some family stuff with some fun adult lunch time.

I’m glad I can be that person for someone!

But, naturally, I ruined it by telling her I didn’t like the new people that came to her dinner party.

Why not? They are amazing people! So accomplished.

I dunno. The woman seemed intent on being the star of the party.

Pish. She’s fine, she just didn’t know anyone but me. You know how we can be in a group.

Fair point. But it all seemed like showing up to a wedding in a prettier dress than the bride to me.

I’m pretty sure we left that at a neutral assessment that I am just crazy.

Since it snowed here this week – with an anticipated 4″ on Friday – the wine event LB, 2.0, the Silver Fox and I were all going to Saturday got canceled. 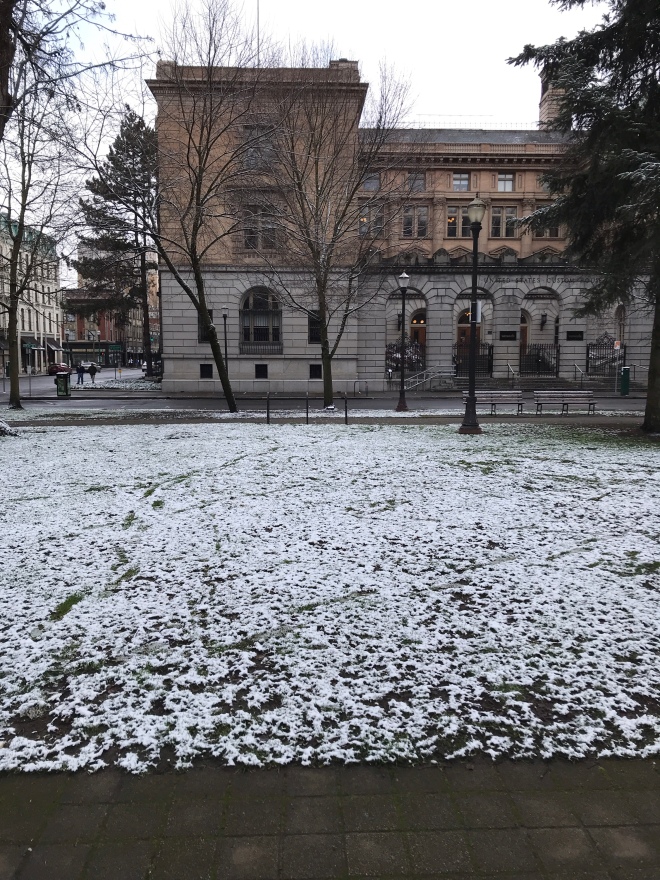 My walk to f&b for coffee was completely un-treacherous. The Fox joined me and we couldn’t decide if there was an unusual amount of families passing by outside or if there was just too few not families out to dilute their presence.

We were decidedly the only two people in the cafe for the most part until he left at 1:30. There was a couple of ladies who walked in and declared they had a half hour to kill and could they just hang out.

It had started snowing. Big, fat flakes. But, still…no! Buy a goddamned coffee and wait. Sheesh. These ladies looked to be 60-ish.

But the type of 60-ish that are entitled and well to do. Terrible combination. In my opinion, that question cost more in dignity that a $3 cup of coffee would have cost them.

I’m probably just mad because I know the cafe is struggling. Their rent is going up and likely to cut their barely double digit profit margin in half, making it likely they’ll close.

All because they’re in a convenient rendezvous area. And too nice to say

At two, I said goodbye to the staff and wandered next door to wash the taste of coffee out of my mouth with a Pallet Jack. Since I was in the area.

There was a cute and nice couple at the bar when I walked in. They chuckled at the catch up conversation the bartendress and I had but settled up, decanted and left shortly after I sat down. That left me, the bartendress (I’ve gone so long without giving her a nickname that I’m afraid she’s just going to become The Bartendress Without A Name…I guess I could call her T’Bwana, thoughts? It’s an acronym portmanteaus!) and a couple at one of the two tables by the window.

We continued our chatter while T’Bwana did her side work and tended the occasional need of the couple.

A third couple came in with a Plus One from New Zealand. They were fun, but not from around here, so I was over them quickly. Another regular came in and sat at the table behind me, reading.

Eight people came in. Fine. Whatever. I’ve made my peace with this illogical occurrence. Party of eight walks into a bar of mostly two-top tables.

I get it, you’re entitled, too. Maybe you’re looking for the old gals next door?

What ticked me off was that they pulled the last two tables in the main bar together for a sit down. The entire room next door – The Rug Room – is empty!

This whole tome, there’s been a couple in The Rug Room. They came in, ordered drinks and went into The Rug Room. T’Bwana went in to check on them a while after and came back in with that “I’m So Sure” head tilt girls do.

Is it weird that there’s 8 tables and 15 chairs in there and those two are sitting cross legged on the floor?!?

Regardless, plenty of room for this octet in The Rug Room is the point. Instead, they decide to become a black hole in the middle of the main bar.

And they pulled the last two tables together crooked so there’s no good path around them that doesn’t involve a hop on one foot.

Naturally, I finish my beer and leave.

I might have mentioned something to T’Bwana as I was settling up.

So, I could make an anonymous call to the Fire Marshall for ya…I know you work for tips and can’t piss these oblivious bastards off.

T’Bwana texted me later saying they’d left shortly after me.

Ok, one last example of how I don’t like anyone…and it’s my favorite story from the last couple weeks, so I hope you hung on.

This could only happen to me.

The Silver Fox had a dinner party. Me, him and his new neighbor. His new neighbor is having trouble making friends. Now, normally I’d give this type of invite a wide berth, cuz it’s an obvious setup, right? 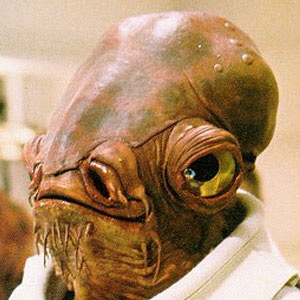 Well, The Fox has me covered

Don’t worry, you aren’t his type, he likes younger guys, too.

But he’s right. He’s seen a guy I flung with once getting off the elevator on their floor. Me, being the Devil. No. Devil’s Advocate, mention that maybe the NY transplant gay couple on his floor are Portland-ing it up with a random third?

His assumption is solid.

I meet this guy from LA and – more recently – down the hall and he is just so friggin’ so.

A) because he’s from New Orleans, originally.

B) he would hate that nickname. And,

C) if you pronounce the “J” with a Spanish accent, you get “himbo” or a male bimbo, and he was!

He monopolized the conversation with unamusing anecdotes about how precious he is.

He has two houses in New Orleans.

He wants to buy a house in France when he retires. But not alone! Why not? I’m sitting here with you and my best friend, and I’m feeling pretty alone!

His BMW is hard to park in this little garage.

He can’t believe that condos in this building are selling for a half mil more than his house in the Hollywood Hills. Thank god he rented that instead of selling!

Topping it off, he has a friend visiting from Seattle soon.

Shortly after we finished dinner – asparagus risotto and what must have been 24 ounce steaks! – he was talking about a shoe dilemma. He’d just mentioned he was a clothes horse.

The Fox gamely interrupted with a question about Marie Kondo. I loved that.

Of course, since Jimbo’s name isn’t Marie Kondo, he didn’t have time for the question and went back to his shoes. Apparently, they’re his faves but he needs to have them resoled and worked on.

I haven’t tried the guy you recommended, but I just can’t find a good shoe guy up here.

Welp, at least you’ve clearly overwhelmed yourself by turning over every stone.

I have to go to LA in a few weeks for work. I’ll just take them to my old shoe guy. But I’m gonna tell him he has to get them done in a day.

One couldn’t trust this gifted shoe tradesman to be able to mail a shoebox. No, Jimbo needs his shoes now. This guy is so lucky to have a customer like Jimbo. I’ll bet he threw a party when she left town,

The Fox gave his dog, George, a doggie downer before the guests arrived. It had kicked the hell in.

George was stoned out of his doggie brain.

And nuzzling my crotch while I scratched his butt.

The Fox got up to get dessert. I was so full, but…dessert!

You know what, G? I’m so full! But I’m still eating my dessert! Yeas I am. Yes I am! I’m just gonna fart to make some room and blame you! Yes I am!

A few minutes later, I pick up a decidedly not doggie scented fart coming from Jimbo’s end of the couch.

Oh, FFS. Really? You’re a precious homosexual…could you please act like it?!?

I debated telling him I was just joking about farting and blaming the dog. I may lack a certain – or any – couth, but I have manners.

I can hold a fart – usually – until I get home.

Then he did it again.

I really don’t like most people. But the ones I don’t like most are really amusing. For sure, not in the previous way that they think they are amusing, either. And the people I do like enjoy the shit that happens to me just as much as I do!

Because, it really would only happen to me…