I’m not going to lie…I’m slogging this morning.  That bums me out, since it’s supposed to be a blogging morning.

Although, revisiting that writing discipline structure for a minute – it seemed like a good idea, setting out specific goals for book writing and then blogging on my “free days”.  Here’s the struggle:  it’s hard to write for five days in a row.

It’s sounds pathetic, but it really is rough. Kinda.

My shoulders get all tense after about day 4 and my brain starts to hurt.  My stomach gets a little whiny, too – go figure – because I have about two cups of cold brew each day that I write, so…yeah.  Good problems to have, I suppose!

Nonetheless, I’m thinking about splitting it up a bit.  Maybe write on Monday and Tuesday, take a breather day on Wednesday to reset the shoulders and rest the brain and then write again Thursday through Saturday.

Or, I could always have a ghost day like yesterday, where I just didn’t feel like writing, so I didn’t.  I’m just pretty sure I know what results a lack of discipline can produce already.

Needless to say, you aren’t getting my best today.  Maybe this will warm me up for a little more significant writing later today.  If not that, then I always have tomorrow to look forward to…The Fox has invited me to his Fox Family Estates beach house for a few days of R&R.  I’m not entirely sure that I’ll go, but I do have a caretaker lined up for Mistress Myrtle, so I could go without feeling like a schmo pet owner…

But back to the burning question of the day.  Have you heard of HQ?  It’s a Trivia Game app for your phone and it hosts live games at least twice a day.

It’s 12 questions for their classic game, which airs at 9 PM EST, so 6 PM here on the Best Coast.  You get three multiple choice answers to choose from and ten seconds to make your selection/answer/guess.  The prizes usually run from $1000 up to $5000 with occasional event games that can be $10000 or more.  I know that there are often $25000 prizes and I have even played – and lost – a couple of the Winner Take All games for $100000!  Those Winner Take All games go until there’s only one winner, so it can be an unlikely 12 questions or go as long as it takes to get down to one winner.

Here’s the deal, though…you usually split the prize pot with the other winners, so that usually boils down to a couple of bucks each. It’s still entertaining, though! Even if you only get to Q6…

I went in very enthusiastic about the idea. I have a pretty trivial brain, so I thought I’d place pretty well.

Flash forward to three months of me not getting past question 6.

Then I quit for a while. A friend of mine on the Facebook played – so I found out – and posted a win one evening. I was all,

I’m smarter than that guy!

It took me a couple months to loop back around to playing regularly. I had to remind myself that HQ was like running or golf…you’re only playing against yourself.

Then they started a word puzzle game called

You get a clue and a Wheel Of Fortune type set of blank tiles and guess letters until you reveal the puzzle, strike out or time is up. You get 10 strikes over a 10 question game. Use ’em up, you’re out! 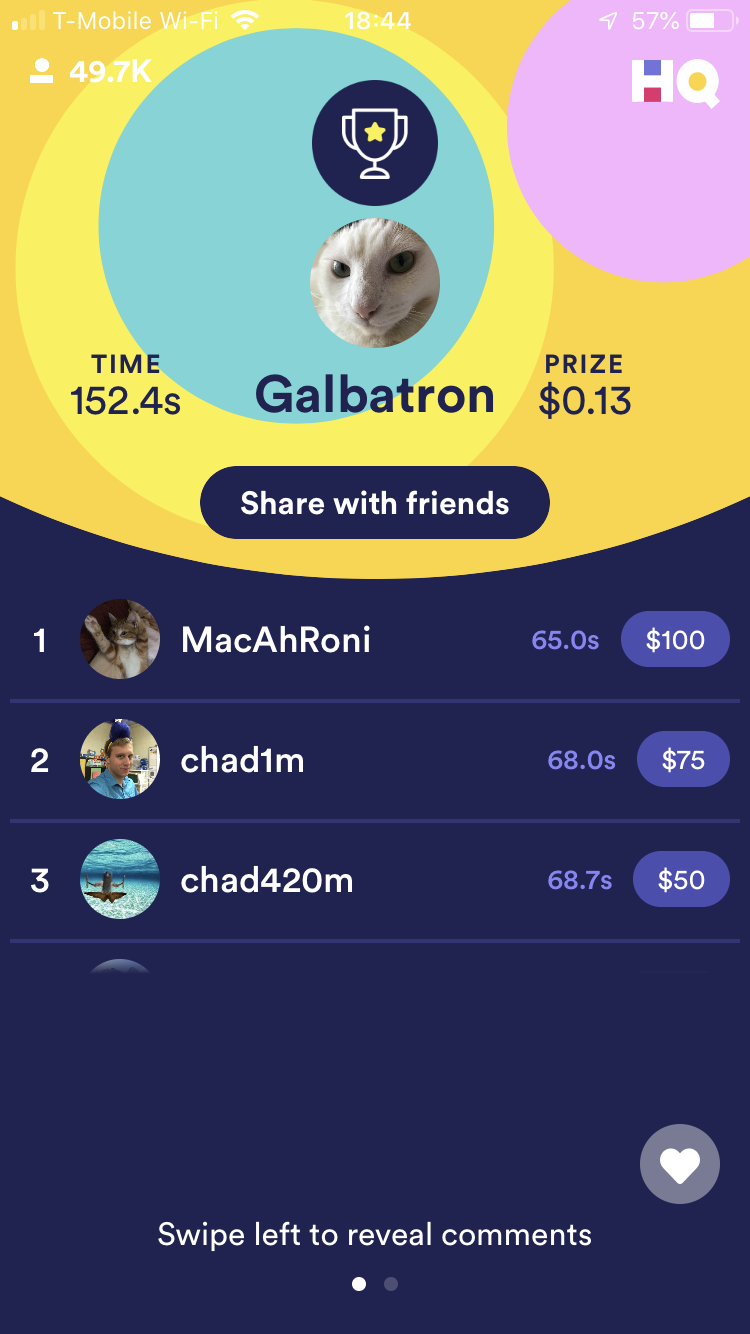 Something had finally happened!

I’m not saying my luck had changed or this was the start of a trend, but I’ve won Trivia twice since then.

While it wasn’t luck that changed, there were two changes to the game that helped change my results.

The first was streaks. Play five days in a row, get a free life! A free life can get you back in the game if you miss a question. You can only use one per game, though, so you have to use them strategically.

The other change that happened was the introduction of levels. For each question you get right, you earn points. Those points accumulate over the course of the games throughout the season. The points accumulate and translate into free passes for the different questions, so let’s say you have enough points for a free pass through Q4, you can skip answering until Q5 if you want or play like regular, earning points on questions you answer correctly or getting your free pass to save you if you’re wrong.

My free passes started saving me and getting me through the first half of the games and then, the more I played, the more free lives I earned because of my streaks. I’m at level seven now, between that and an occasional free life, I’ve racked up two more wins.

The disadvantage, of course, is that I’m not the only one who’s benefiting from this structure. As you can see, my big win was only $.21, hardly the coffee money that winners used to claim after a win. I’m up to about four bits now and level seven. Maybe by the end of the season – which I believe is this Sunday – I can break into whole dollars.

Regardless, it’s a fun way to kill 15 or 20 minutes while dinner cooks. Feel free to give it a try. My player name is Galbatron – and you can see that The Most Dangerous Cat In The World is my avatar – so use my name when you create your profile and maybe I’ll get an extra life for the referral.