…Got nothing on The Gays These Days.

In the defense of kids, at least they’re kids. I really have no defense for some of the ridiculous shit The Gays do.

A byproduct of the reality TV celebrity culture lives here in Portland. One of the Fabulous Baker Girls suggested she arrange an introduction back when the sand was still falling through this guy’s Quarter Hourglass.

My gut reaction was to reject the proposition outright. I mean, A) I’m too old; but, B) I also just tend to steer way clear of that reality nonsense. But, to be fair, I still gave him a once over.

Not for me. Far too dear.

But, we interact on the Instagram occasionally and I enjoy most of his escapades. Random fitness center selfies (told ya, too dear for me!) from his apartment building, dog walks – which is totally my “aw” spot – carpool karaoke solos and whatnot. Whether or not he should go blond again.

Of course, right now I’m watching his work trip (Nike, so I have to hate him now) to Japan and kind of dying of jealousy. I feel better if I tell myself that he’s the admin for the group.

Right now, he’s low grade obsessing over being “in shape” for Coachella. To which I say: boo!

I mean…first of all, he’s in shape enough. But mostly, how is politically right supporting Coachella still a thing?!? 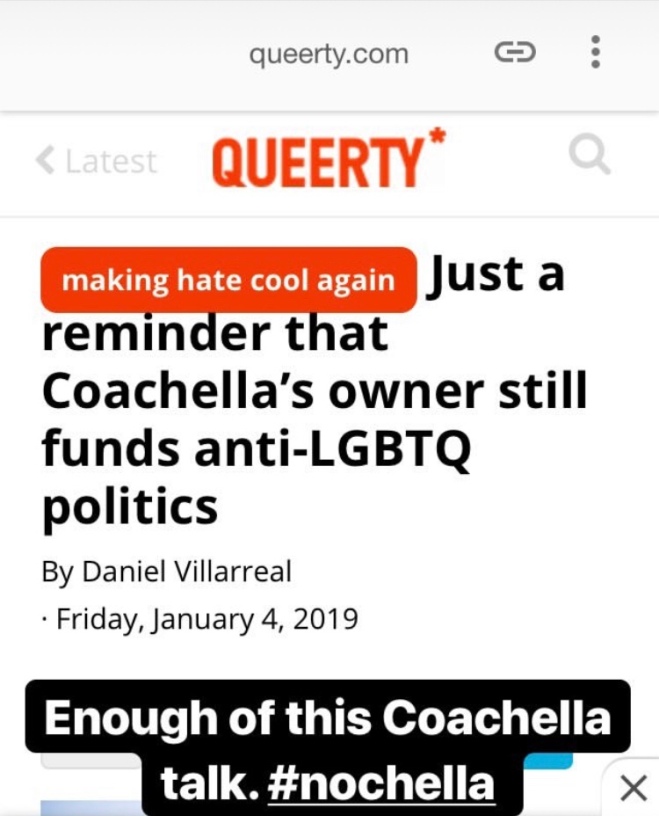 And that’s kind of got to be a deal breaker for at least the LGBTQ community, artists and their allies and supporter.

Anyway, I’m sure that at least partially to that end, a couple of weeks ago I watched one of his stories where he was getting Botox and lip filler.

That gave me a little pause.

Naturally, I had to ask…

And then I never heard back from him. We’ll chat again, we always do…if I initiate it. The same “got better stuff to do” phenomenon occurred a few weeks ago when he was fake-bitching about having eaten a full dozen donuts.

Come to think of it, that might have been him bragging.

And I come by this opinion pretty honestly. When I was living in Seattle, I had Botox. A few times.

It was amazing how big a difference it made on my forehead after a lifetime of witnessing the stupid shit people do in public during my retail career. “Relaxing” those muscles that were in a near constant state of use from raising my eyebrows in surprise several times an hour at my co-workers’ and customers’ shenanigans really made a dramatic change to my forehead.

As a pleasant side effect, this also allowed me to remain an enigma to my friends and employees, so when I let my frustration show, it was a choice.

But I only did it a few times. The last benefit I received from my use of Botox was surprising my doctor when she told me that her prices were going up from $10/unit to $15 and I replied,

With that context for at least one of the injectables he was using, I felt I had a foundation for my comment. But this might surprise you: his use wasn’t what irritated me most about this Instagram excursion.

It was that his doctor let him video the whole thing!

I’m watching and then realize, (s)he’s working around his arm that is attached to the phone he’s using to video this whole thing. Shame on that friggin’ practitioner!

It makes me mad, but I guess it’s up to the two individuals involved…I guess. Once again, though – what we tolerate, we condone.

Maybe “kids” these days need adults (like me, or doctors) to tell them when something is not an appropriate behavior or just wrong for them.

3 thoughts on “Kids These Days”