Literally, now that I’ve typed out that title.

But the meaning behind it is simple: I had an opportunity this week to sign the first autographs on both of my books. 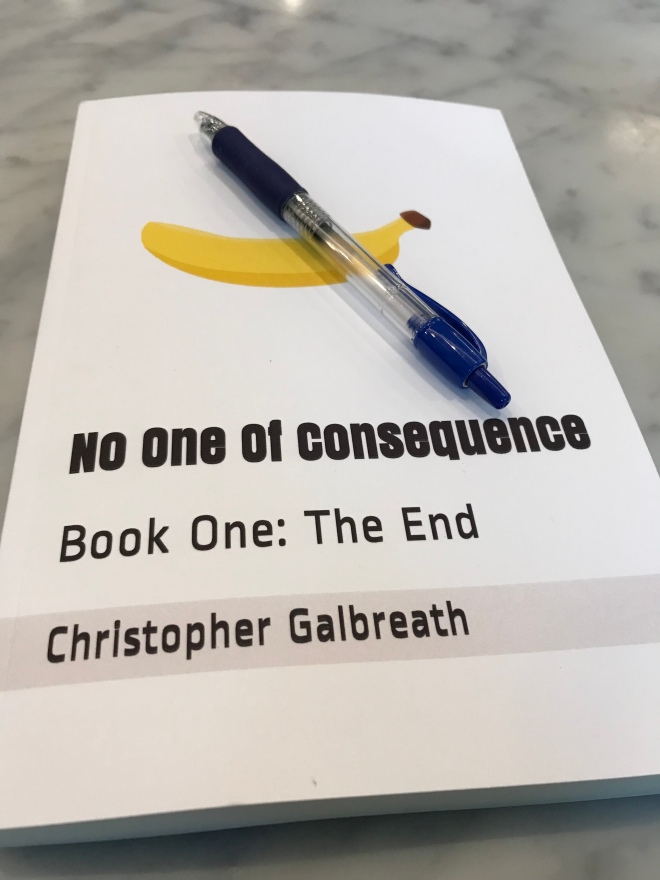 Quite spontaneously, I assure you. The first was my school friend, MMK. She sent me a text early in the week after reading last weekend’s blog entries. She was suggesting that it had been entirely too long since we last had a coffee date.

I think our last coffee date had been at Sister’s Coffee House, which in the interim has essentially burned down and been rebuilt.

So, yeah…it had been too long.

She told me that I could sign her book. I thought she was kidding and just went along with it.

Imagine my surprise when she whipped out her copy of Dating Into Oblivion! We just happened to be meeting on the one month anniversary of DIO going live on Amazon, so it was rather amazing timing, this impromptu signing.

Fortunately, I’d been thinking of what I’d possibly write on an inscription for her.

I came up with nothing.

But as we sat there and chatted, it dawned on me how special this friendship is. I’ve been fortunate to maintain connections with school chums, thanks to social media. But I’ve known MMK since the second grade.

And we still see each other!

It really reinforced how unique that friendship really is.

We’re coming up on three years since my high school class had their 30 year booze cruise here in Portland. I was an honorary invite since I ended up going to high school in Kansas. That environment lent itself to easy chatting, alcohol seemingly having a strangely relaxing effect on social inhibitions.

I’m not sure if you ever noticed that…

But that event was really a little bit of catch up and a lot of glory days. With MMK, it’s usually the opposite – although, I must also admit that she’s a very generous conversationalist. She asks a lot of questions that allow me to talk about my favorite topic.

So I’m kind of double lucky.

It was what I suspected would be my only highlight in a fairly sad week. I’ll probably write about that tomorrow. The Silver Fox was out of town, so you can’t imagine how restorative my time together with MMK was.

But I ended up being wrong. That’s a strange sensation, let me tell you.

The Silver Fox came back to town late yesterday and we got to meet for coffee this morning. I had told him I planned our usual coffee activity of writing, but then showed up without my computer because I chose to update my laptop when I got in the shower.

When I was ready to go, the damn thing still had 43 minutes remaining.

Oh, well…I think The Fox and I have only gone longer than five days without a hangout three times in the last five years, this being the fourth. Not having my laptop with me allowed for more actual conversation.

When I show up, he asks about my laptop and I tell him.

Oh, well did you bring a pen?

And he starts digging around in his bag. I’m thinking it’s for a pad of paper and I think, “Aw. How sweet! He’s gone help me keep writing!”

I was half right.

He pulls out the copy of No One Of Consequence pictured above and plops it down in front of me.

Boy, I really don’t think I see him happier or prouder than when he pulls one over on me! Counting my surprise birthday party, this is twice this year and it’s still only April, so it’s quite a roll he’s on!

People who know my friendship with The Fox will know he’s more likely than not to need to run to the store for bananas on any given errand day. I swear, sometimes he goes twice a week.

You know what that is?

So for his inscription, I referenced the cover of the book and said now he’d always have at least one banana.

And, no…that’s not why the banana is on the cover! Although I suppose there’s nothing really wrong with letting him think that.

So, my week ended up having two delightful highlights.

Imagine my surprise as I’m writing this to – shocker, procrastinate about completing the damn thing by opening the Twitter. In looking at my profile page, I realized that in the last week I’ve tripled my followers. That’s a big deal, to me, anyway. I’m not saying I now have Kardashian or influencer-level followers, but the followers themselves are significant.

They are other independent writers, editors and bloggers. That’s a network I’d like to be social in, so I’m a week on unexpected surprises…that little occurrence ices my cake. I should go hang out with them a bit now.

PS: I’m filing this under “work”, that’s me manifesting a solid side gig as an author. So, there.

5 thoughts on “A Week For The Books…”