That’s a thought that’s been on my mind lately.

The impetus for that little question? The appearance on the streets of Portland of the “next” generation of e-scooters…and evolution, so to speak.

Yup. It’s like an e-scooter and a bike had a baby.

At some point, someone on a design team had to say, “This is a pretty lame idea”. But they forged onward with production. Probably the argument for was something along the lines of, “But we can make a buck”…

Don’t get me wrong, I’m one of the few that isn’t outraged by e-scooters whizzing through the streets of my hometown. Whizzing down sidewalks and through our parks is a little aggravating, sure. But I’ve adopted a respectfully proactive approach to that frustration. When I can, I say in as neutral tone as possible, “That’s – sub out that pronoun with park or sidewalk as appropriate – not allowed”.

People are surprisingly ok with that tactic. I’ve only had one person yell at me and try to give chase. He broke off after turning his scooter around. It’s not that I outpaced him with my lanky gait, I think he just saw plenty of witnesses and thought better. Good for him.

But that takes me to my second inspiration for this devolution post. This text exchange from yesterday between my mom and me:

There was not one, not two, but three separate protest marches in the streets of downtown yesterday. And I was working right in the middle of them.

Police in heavy duty troop transport vehicles driving by the front of my store.

Cops in tactical riot gear stopping in for a soda or snack while they waited for the potential melee.

Awkward moments of me staring at a customer’s tattoos or tee shirt trying to figure out if they were aligned with any particular group while the police PA blasted out an eerily Big Brother-esque warning to disband the un-permited and therefore illegal march.

And a new group – at least to me – called #HimToo.

If pressed, I’d bet that last group wasn’t a legitimately harassed or assaulted group of men. I’d go one step further and posit there was a barely discernible Venn Diagram of that group’s members and those folks who’ve spent the last four weeks wonder why they couldn’t have a Straight Pride parade all over social media.

It reminds me of a magnet I bought about a quarter century ago.

Hold on. I’m debating going through a couple of boxes I have packed away in a closet to find it and take a picture for you all…the Silver Fox pointed out last night – because I have plenty of dumb moments, too – that the reason my fridge magnets are packed away unlike his which are plastering the front of his fridge is because his is faced with quality stainless steel and mine is a lesser caliber metal.

Shit faced, if you will.

Ok, I’m not going to go find it. Not because I’m too lazy. Rather, because of this situation: 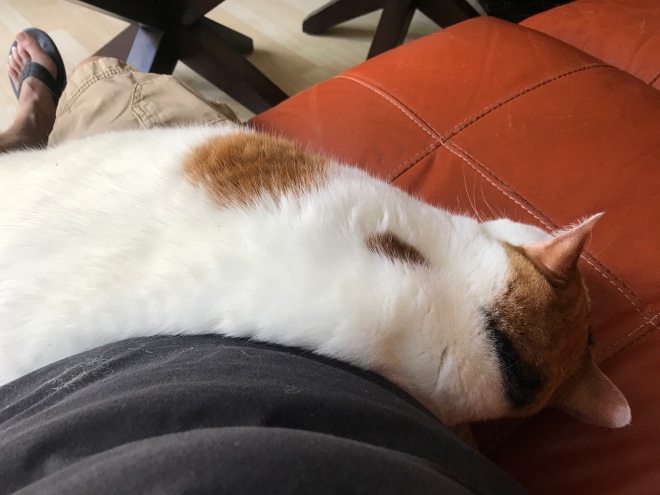 How dare I disturb Myrtle’s blissful slumber? The poor dear barely gets 20 hours of sleep a day!

Back to the magnet.

Never underestimate the power of stupid people in large groups.

It’s a quote attributed to George Carlin. Boy, was he ahead of the curve with that observation!

Gimme all that money!

Everybody gets a trophy.

We want all the money, too!

Did someone say trophies?

Here’s hoping that whole Crispr thing works out if only so whoever ends up controlling the technology can finish Hitler’s work…if only to prove the point that evolving forward is about inclusion not so-called refinement.

Sure, I guess that means a certain grumpy old man is going to have to learn to accept those who choose to neither stand nor pedal on an e-scooter.

As another wise, old friend used to say,

4 thoughts on “Can Evolution Go Backward?”