It’s me, so you just knew there would be a Part 2. Let’s call this the “New Shit, Who Dis” edition.

Realistically, this is probably more like Part 2,000,002 at this stage in my life.

Anyway, a week ago last Friday, I had a great interview with a local Weed Chainlet. I mean, really great. Like she nearly offered me the job on the spot great. We had mutual colleagues (that didn’t suck, IMO) at not one, but two of my past positions. She had a repeat business to business relationship with a third past employer of mine. She’d just turned 50.

Dialing it back, she rallied with “I’ll call you Monday with next steps, the owner may want to meet you before we job offer the final candidate.”

Alright. Fine. I can twist over the weekend. Since it ends in a job offer.

At this point in my disemployment I had been seriously looking at a car with a “Fuck it, I’ll just drive for Uber” attitude. Honestly, with the regularity that my stupid little part time job was resulting in full time work – week 13, if anyone is counting – I was on the verge of supporting myself with my actual earnings.

But a salaried job and it’s stability was more of a comfortable routine, so there’s a definite allure.

Naturally, Monday comes and goes with nothing but a 4 o’clock email promising me she’ll call the next day.

Tuesday comes and goes with nothing.

Tuesday night, I go test drive a car. It’s late, and after 18 months of irregular work, my credit and income history is kinda-barely on the wrong side of meh, so I leave with a “Let is talk to the bank tomorrow, it’ll work” and a promise to – you guessed it – call me the next day.

And then, nothing happened.

I was debating the breadth of interest an Instagram audience might have in a near-senior-citizen’s Only Fans.

I joke…I personally didn’t have an inclination.

Then Thursday I get an email from a local HR Temp Agency that had reached out to me with a sure thing last month.

Don’t worry, I somehow blew that. Apparently, I was too “into people” for an HR position at that company.

Anyway, this new opportunity was apparently just three or four days a week, good rate, wanted someone the next week, casual office…with an office cat. How could I not be interested?

Believe me, though, I kept my optimism in check.

Well, if they pull the trigger today, I can work that out with my PT job for next week.

I delivered that with a blitheness that resulted in an email 30 minutes later offering me the job. They’d even specifically mentioned that they were hoping to place someone permanently.

Generic Person, this whole aloof and hard to get thing works! It works way better than “generic person” works as an expletive versus the completely sexist term “man“!

Now, you might think that it’s exciting that I’m starting a new job today, right?

It is, don’t worry…I’m not that jaded.

But my family vacation is the end of next week. And even though this temp agency knows this, no one has mentioned it. Partner that with I didn’t think I’d get yet another job, so I didn’t either.

So, there’s that. But my parents rolled with the news. As a matter of fact, from the sounds on it, my reason for only going for a partial week is far more worthy than other members who are blowing out on the trip.

Saturday, the friggin’ car guy calls with a “Poof, your approved!” message, so now I own a fucking car, too. 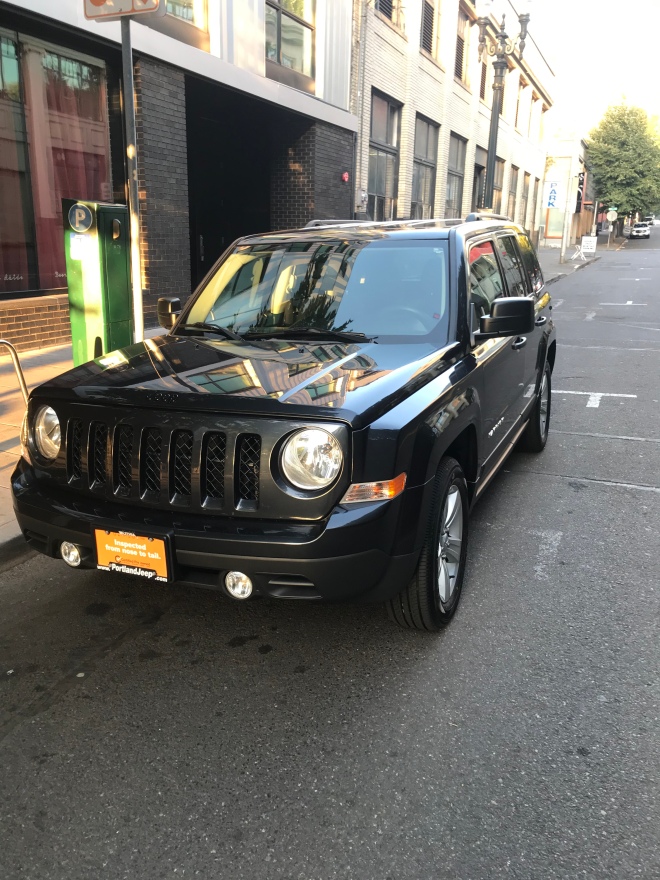 And let’s face it, this being my life, I won’t be the temp to hire guy, right? So having the Uber potential to fall back on is not an entirely shit idea. Until then, if I want to make it pay for itself, I only have to drive six hours a week – and that’s payment, insurance and monthly parking!

The strong start I thought I’d have with driving for Uber last weekend turned into an exercise in frustration. The type that had me saying things like, “How do ‘You People’ have jobs and it took me 18 months of bullshit to get one?”

So much dysfunction. I have to upload three different vehicle documents to be eligible to drive: insurance, registration and inspection.

I upload the docs and then call because I can’t go online to drive.

Oh, it takes about two hours for our team to review them!

I wake up the next day to three 2:30 AM emails – 6 hours after my phone call to Uber – saying my uploads were rejected.

My insurance doc didn’t have my name on it.

My title was missing the vehicle information.

The inspection was the wrong document.

All sent in the same minute, so I smell more incompetence.

Sure enough, I can easily find my vehicle information and my actual name on the first two documents. I call back in and get an apology and am told to just resubmit them and this CSR will email the documents team to assure them that he visually verified the information was present while talking to me.

It turns out, the “inspection” is actually a vehicle inspection by Uber that verifies my car meets their standard. There was zero indication that this wasn’t supposed to be an emissions inspection in the instructions. Anyway, the helpful CSR was emailing me the address of my local hub.

I’m sure it’ll end up being in Eugene or something.

But that pessimism is beside the point.

My insurance was accepted, my registration was rejected AGAIN, and I never got the email telling me where the inspection office is located.

How do these boobs have jobs and it took me 18 months to get one?!?

Oh, well. I’ve got some time. Although, I was really looking forward to driving for Uber. All of my email bill payment reminders start rolling in around the 15th of the month and sit unread until I can pay them at the first of the month.

It actually creates two weeks of stress since aside from the reminder that I have unpaid bills and no immediate manner to pay them, those stupid red push notification dots are odd triggers for my anxiety.

But I’ve got an hour left in the cafe before I have to leave for work, so I’m gonna edit!

This is a routine I could easily get into: edit from 7-830, work from 9-5 and then drive for a few hours three or four days a week.

I feel a debt to the convenience store for hiring me when everyone else was too dumb to, do I want to keep working there, too. But the pull of a four day work week is mighty. I might have to juggle.

Being awesome enough to get both the permanent HR assignment and only need three days to get it done each week.

Work a full fourth day on Saturday or Sunday for the convenience store and then do two each of 6-10 PM shifts with them and Uber to round out my work days.

Odds on whether the universe complies versus there’s a Part 3 coming?

Until then…maybe I’ll switch over to driving for Lyft.