High Maintenance is one thing in – I feel I should selfishly mention – a friend.

In a vehicle, it’s a little less charming.

Yet, here we are…Pat and I. They got dropped off at the shop yesterday to repair a body leak. A leak I wouldn’t have discovered until who knows when if o wasn’t driving with Lyft, since it was presenting in the backseat passenger side footwell.

The original problem was pointed out December 20th, which coincided nicely with our first serious rain of Fall. Yes, this was on the final day of Fall, too – thank you, Global Warming. I’m sure there had been mild and unnoticed dampness prior to this, but this was actual standing water.

<cut to me holding an empty bag labeled “fucks”>

Being Christmas, they were having trouble getting us restored at the dealership.

No, that’s not right. The dealership was out of loaners, and with my needing to take The ‘Phew over the mountain to his parents’ a couple days later for the holiday, that was a problem for me.

I called the dealership to speak with the GM, he wasn’t available. So, I vented my frustration at the situation onto the Contact Us page of their website.

I received an immediate response, which I suspected was auto-generated, but included the words “as soon as possible”, so I felt the ball rolling.

Then I received a second, which was odd. I read it a little closer than I had skimmed the earlier email.

It was a sales pitch.

I was being invited in to check out their new and used inventory.

I shook my head and put it out of my mind. Dwelling on these professional shortcomings only drags me back to the state of mind I was in when no one would hire me.

Still, that second sales person followed up a couple hours later with a phone call. At that point, I felt it was incumbent upon me to share my professional embarrassment with him.

He apologized profusely, both for his lapse in attention to detail and for Pat’s ongoing struggles. In an attempt at redemption, he printed out the nudge he’d gotten from their system based on my email and put it on the GM’s desk.

In front of the GM

…that was how he phrased it, leading me to suspect the GM was actually present for the delivery.

There was nothing I could do, the car was drive-able, so I shelved the repair issue until after the holiday.

My overriding concern was frequency. I’d like my car in the shop less often than I have actual dates. While I’m glad that Pat isn’t in the shop weekly, it bothered me that they were averaging every other month visits. Particularly since my ability to leverage my car expenses and earn some side-hustle money is pretty limited with a loaner car.

I’d set aside the non-drive-ability observations if had about Pat.

The filling loosening toughness of their ride over bumpy roads.

The accompanying clanging and screeching of dry metal in those same circumstances.

The groan of the frame whenever someone exited the passenger side of the car on anything but flat ground.

The oil light coming on six weeks after purchase – even though the Jiffy Lube sticker in the window suggested I had 1500 miles to drive before I was due.

The gouges and dents in the metal OM the inside of both front doors.

The squeak of the brakes when I stopped on a downhill grade.

The rub of the windshield wipers three months after I bought the car.

I’d sucked those pesky little imperfections and inconveniences aside.

Was Pat a lemon?

I suspected that Pat had been in either an undisclosed or an unreported crash.

My course of action in the face of the dealership’s GM’s refusal to communicate?

Well, to assume my assumptions were likely, obviously.

So, I learned Oregon’s Lemon Law only applies to new vehicles. My Pat was a 2016, one previous owner car – so no help there.

I did find a link to Oregon’s Department of Justice Consumer Complaint Department, though. Since I had given a Lyft to Oregon’s Attorney General,

who I knew through the app simply as Ellen, I felt like I could complain to a friend.

And she was quite nice during our ride, by the way. I was even more glad I voted for her after meeting her!

After detailing the struggles I’d endured and observed in such a short timeframe, I packed up The ‘Phew and took off for Central Oregon.

Two weeks later, post-holiday craziness, I was a bit frustrated to have gotten no response from the GM. The DoJ website had listed other complaints they’d had for this dealership, six total over the past three years. The only other “Selling Damaged Goods” complaint had been earlier this year, which troubled me. But it was also listed as resolved by the dealer, so I at least felt like they would take action.

I also made a second attempt to get Pat in for their repair work – again, no loaner.

Three weeks later, it started raining again. More water visible over the pile of the carpet. I made a drive-by to drop Pat off: no loaner.

The repair supe that had helped me nearly three months earlier now remembered my name and my car. I made an appointment for two days later, when he promised me an available loaner.

Then I went home and stewed.

I decided to voice my complaint to the GM, both over my issues and his not responding to my complaints.

Forty-five minutes omg hold later and I get the receptionist. She tells me the GM is off for the day but offers me the Assistant/Sales Manager.

Begrudgingly, I agree, and she puts me through.

Ok, that actually made me mad. If you’re trying to help a frustrated customer by suggesting a fallback solution, stand the fuck by just in case it doesn’t work. If I was only going to get voicemail, I’d rather have the voicemail of the joker I was frustrated with, anyway!

So, Friday morning, I haul my ass out of bed early on a day off and take Pat in. The plan is to give them a three hour shower to find the source of the leak.

Probably just the door seals. But it could be the body welds…

Since door seals are magically not covered by my warranty, I hope it’s the body welds. That would also jive with the growing wreck theory I’ve been nursing, so…

By the way, the tech tells me he got me a Grand Cherokee for a loaner – I tell him I don’t know what that means, but thank him.

It’s the nicest Jeep on the market. 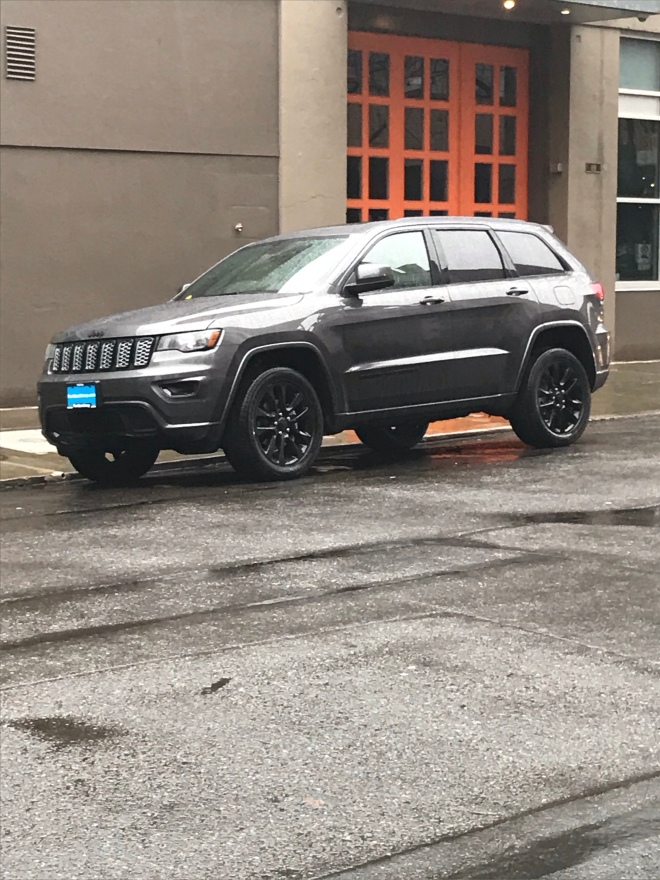 Witness: my text to the Silver Fox after driving off the lot on my loaner.

But, I’m less excited four hours later when I get this text from the Service Department.

Hey Chris, so it is the inner door seal on the rear door that needs to be replaced. Like we talked about the door seal would not be covered so it is going to be a cost. Looking at $198 with parts and labor. I do have to order the seal and would not get it until mid next week. You can use the loaner car until then no worries. Let me know if you would like me to get it on order – Update your satisfaction at any time here https://getpe.co/YXp76K – Joseph

My response was a little dry, particularly in comparison to Pat’s Spa Day activities. 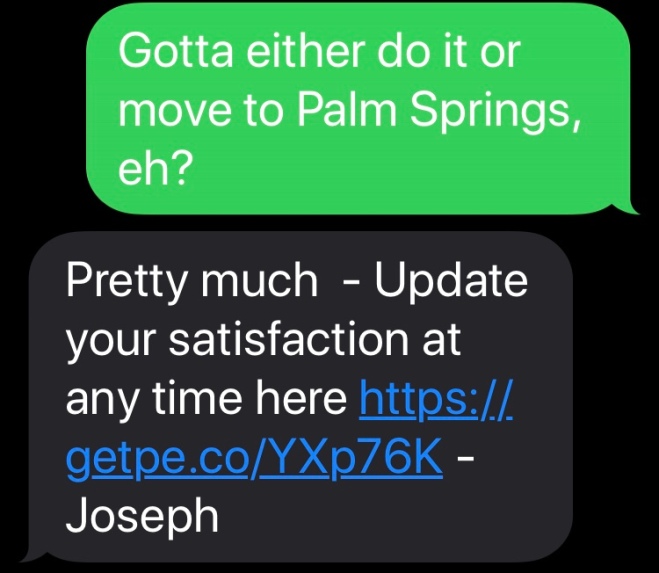 So, here I am: stranded with a really nice loaner for the next five days on earnings restriction since I can’t drive it with Lyft since it’s not listed on my insurance policy. On top of that, it’s gonna cost me $200 and the GM still hasn’t addressed my other complaints.

Maybe while I’m not driving, I’ll revisit those issues with him.

But right now, Conspiracy Theory Xtopher is in overdrive thinking it was the body welds and they dealership is using the excuse of ordering a door seal as cover for repairing my other issues from the DoJ complaint…yeah, it’s fun in my neurotic brain.