This made me think a lot more than it should have. 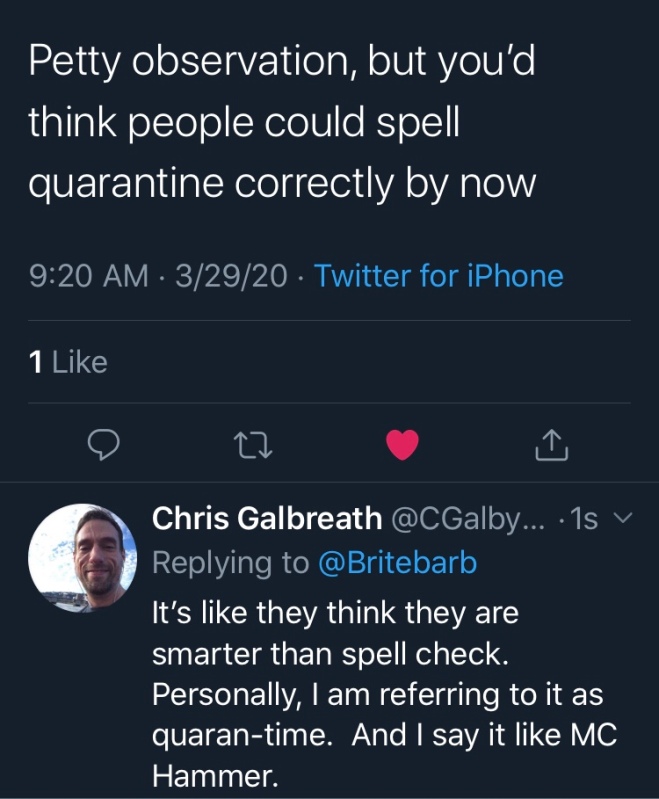 Sadly, I spent a lot of that thought trying to think myself out of that response. Additionally, I think truly wise humans are patient. I am not even pretending to elevate myself to the level of a patient person.

Case in point, when I posted yesterday’s blog there was a quote about arguing with stupid people lurking just outside my consciousness. I could feel it out there, but no matter how hard I squinted at the dark edges of my mind…I just couldn’t make it out.

A fellow blogger lit a match in the comments, reminding me of my search. But, true to my impatient form, I was done with it, so I manipulatively told him that I knew he’d know the quote I had been trying to recall.

Now, he – being not only wiser than I, but more patient as well – refused to bite. Instead, giving me just a little more illumination so that I could find it myself.

So when I saw BreitBarb’s tweet this morning about these stupid Americans that seemingly can’t spell while using technology in 2020…well, the shortcoming seemed obvious to me.

I think people are smart enough to know that a dotted red line is a literal red flag. They choose to ignore it.

Then again, I’d also think that somehow, someone during that whole “someone ate a bat in China*” thing and caused Coronavirus would have thought, “I probably shouldn’t serve that” or “eat that” or what-have-you.

Now, unlike a certain senator from Texas, I’m going to go ahead and say, ok…culture. Admit that I can’t fathom the custom, regardless of how much effort I put into it – the perks of being a picky eater. Then walk away, lest I embolden or be perceived as racist.

China’s approach, on the other hand, was to drop new legislation from its fake capital Kibosh, stopping the custom. This effectively gutted what I gather to be a $72 billion annual industry for China. But prioritizing science over culture or custom, China demonstrated concern for not only its population, but the world overall and stopped the root cause of this outbreak once and for all.

And we can’t even get Americans to capitulate on spellcheck. No wonder Portland is on track to be the new Palm Springs.

I’ve no doubt our stupid American indulging country will trip over itself to fill the void left by China and crown itself “the best” yet again as it finds a way to start churning out future Patients Zero.

Someone has to do it.

Plus – I mean – hedging ones bets is the smart thing to do, right? We can’t put all our world annihilation eggs in one basket – best to diversify and make sure we pick up that literal pandemic torch that China seems to be dropping.

China – Rituals and customs that put world health at risk should be changed.

Probably the US – Hold our beer.

* I have – in case it isn’t completely obvious – drastically dumbed down the path CoV-2 took from Horseshoe Bat in a backwater China community to the present human virus causing the global COVID-19 pandemic – is saying global and pandemic redundant? Anyway, the exact path from one species to another is presently unknown.

Not that Trump supporters and climate change deniers would accept scientific fact as proof of anything.

If you can activate their racism triggers – an easy enough endeavor, it seems – then they’ll believe anything. Ergo: this started in China when some guy ate a bat.