Howdy y’all! It’s Grumpy, Old Xtopher – here for another episode of The Voice of Treason.

I don’t want to shock anyone, but I’m not going after my favorite barrel fish, The Gays, in this episode.

It stands for All Cops Are Bastards. Sometimes it’s represented by 1312, which is its first letter numerical equivalent…because when you have a message, you’d hate to just put it out there where anyone could understand you without a secret handshake or decoder ring being involved.

I’ve been taking pics around town over the last year of scenes where people have casually graffitied “Fuck the Police” or “ACAB” on walls or sidewalks. I say casually since there was no newsworthy catalyst. I’m just walking down the street and <bloop> graffiti. It’s actually something of a blog post I started last year called Un-Civil War, but I’m not sure it’ll ever make it out of draft mode at this point. 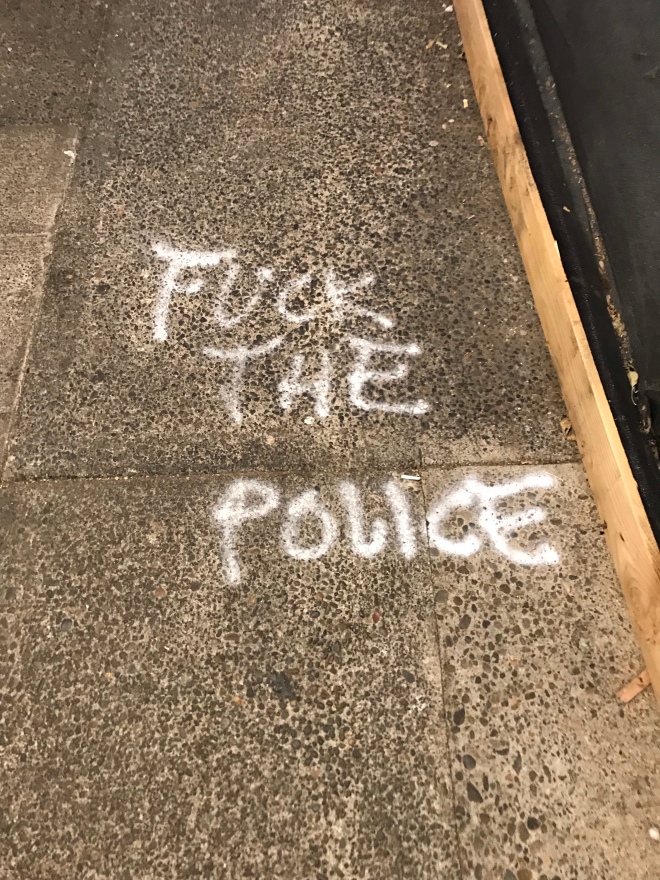 We’re heading into night four of protests in Portland and our third night of 8 PM curfew in the city. I also just heard from the Silver Fox that Governor Brown has activated the Guard to assist Portland. I’m extrapolating here based off an earlier story about this prior to the Guv committing Guard troops – in order to assist Portland in protecting its governmental buildings so the police are freer to patrol the city.

But what’s bothered me about the emboldening ACAB messaging has really come to a point for me over the last four nights.

I think it really crystallized for me when I was driving yesterday afternoon.

It was around 4 and I was taking a couple and their pup, Buffy – how sweet is that? – from Southeast to their home a few blocks from mine in Northwest. We were still on the Eastside, a few blocks from the Burnside Bridge and were suddenly passed by two troop movers, large trucks modified so cops could ride standing on the running boards. These were followed by two dually style pickups with grill lights flashing.

Ridiculously, I ended up sitting side-by-side with them at a stop light, waiting to cross – if you can believe this – MLK Boulevard before crossing the bridge.

Just let the surreality of that whole scene wash over you.

I wasn’t sure what the protocol was in this situation, was I supposed to pull over or turn off and find another route? Just drive like it was no big deal?

I held my palms up in question when one of the cops riding the side boards looked my way.

His response was to nod once and then give me a makeshift non-contact “five” by dropping his open hand toward my upraised palm.

Well, he’s certainly not a bastard.

My passengers chuckled and we decided together to proceed across the bridge with the cops. I gave them a generous head start, though. And in a truly miraculous occurrence, no non-native Portland drivers honked at me.

From the turn they took onto 2nd once we crossed the bridge, it seemed they were heading for the Tom McCall Waterfront Park or possibly down to Naito Parkway to head into the government core of the city, which is in Southwest between 2nd and 5th Streets. That would actually track, since I’d been re-routed around protests in Southwest when I’d crossed the Hawthorne Bridge earlier.

I’d heard later from a rider that Tri-Met had stopped bus service downtown at 3:30 that afternoon, and at 6 PM, the city had closed down several bridges into downtown as well as the exits into downtown from the 405, which loops around the central core of the city – see also: my way home.

Basically, the city was trying to control access to downtown. If you were coming in from the outer neighborhoods, you were walking.

Which is exactly what the protesters did.

Several groups held rallies in areas of town. Some with early end times to respect the 8 PM curfew, others intending – it seemed – to end up downtown right around the start of the curfew. A couple of the groups that ended earlier had stragglers join the later march. That resulted in a group of several thousand people marching down Burnside toward the bridge I had followed combat geared cops across earlier. 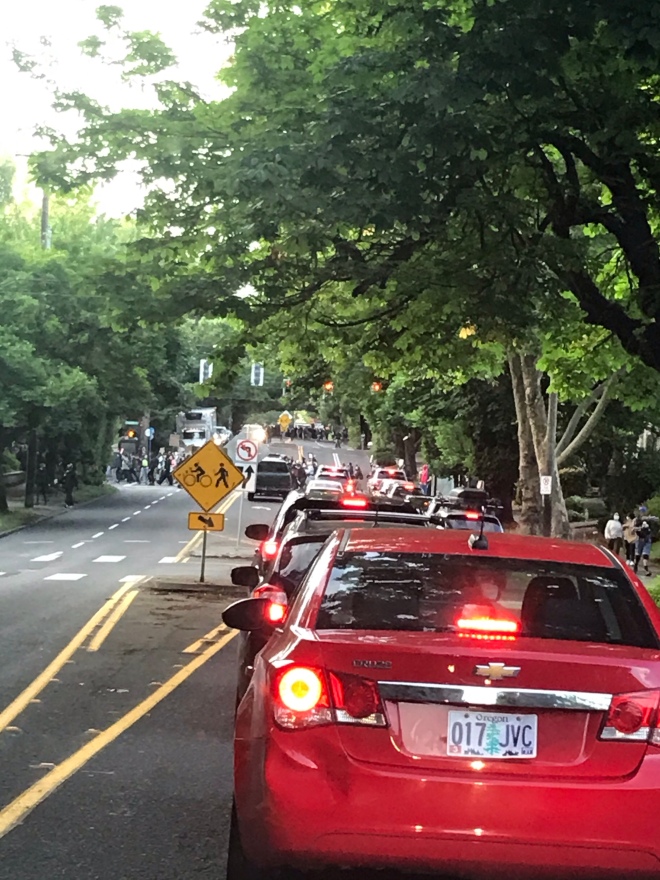 I actually picked up a nice young woman a few block past this march – after weaving around its tail five blocks eastward – who had just broken off to head home. She’d just moved here in December for work and asked if “we” did this type of thing often.

I told her our unofficial nickname and weather forecast (Little Beirut and cloudy with a chance of protests) and she seemed to get the point. Still, I added,

“Not a bad fallback!”

But cool cops in tactical gear and fun stranger-on-a-plane type convos aside…this morning I watched an hour and 16 minute video that one of my friends from yesterday’s post…er, posted of himself in last night’s march. From the timing of it and where he was on Burnside when his video started, it’s likely he walked in front of me while I was blocked by the protestors in the pic above.

Ironically, in a fit of things that could only happen to me, this guy falls into the “If you drive Lyft long enough, you’re bound to give a ride to someone you boned” category as not only the inaugural but thankfully only member.

I watched the video because of the attached post 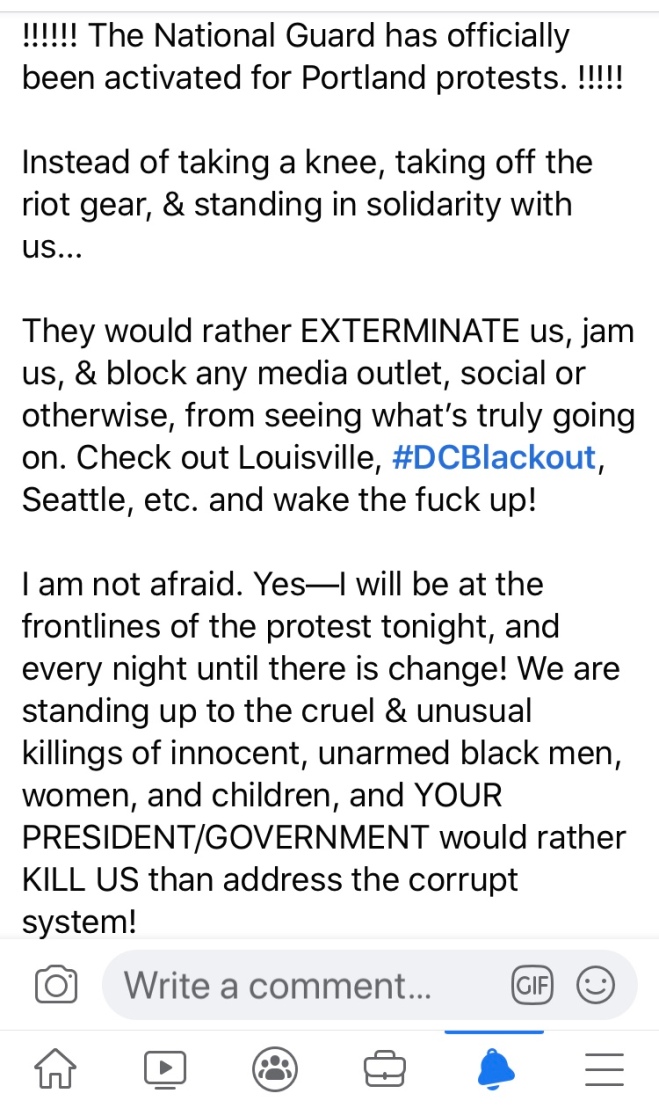 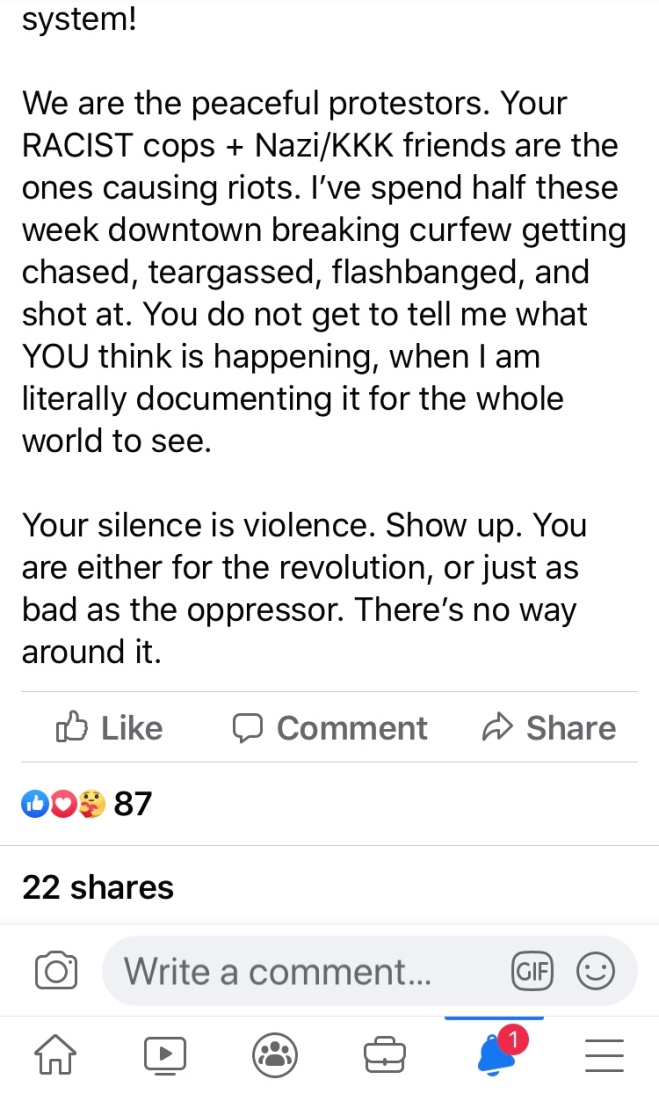 His post hashtags the now debunked DC Blackout that supposedly highlighted the difference between the start of Pride month at the White House in 2015 versus last night.

Only that pic wasn’t from last night. It was from 2011 or something…

His post also uses ultimatums and hyperbole that suggest if you stay inside or silent, that you’re complicit in the violence against minorities.

It also predicted the activation of the National Guard by a good 6 hours and assured his followers that the government was trying to exterminate protestors.

Still, I watched the video.

I’m proud to report that not any part of me was anxious to see this younger man tear gassed. Or exterminated.

I wouldn’t mind seeing him tone down his hyperbole a bit, though.

In the video I watched – which I know covers only one of three nights of his activism – he wasn’t chased.

He yelled a lot of chants.

“Get out of your house and on the streets” to people watching from their balconies.

The call and return of “Say his/her name!” to give voice to George and Breonna and Aubry now that theirs have been silenced.

But the one that really bugged me was the “All Cops Are Bastards”.

And it bugged me for the same reason that his post bugged me: it’s dishonest.

The injustice these protests are addressing don’t need anything extra. Especially in today’s climate of malleable integrity.

…from another Portland protest, no less – then your argument and credibility are shot. C’mon, a cop hugging a black kid?

Definitely not a bastard.

Not to mention you’re no better than our current POSOTUS – that’s Piece of Shit of the United States, by the way.

And that’s a slippery slope.

If your response to a picture of a cop taking a knee with protesters mimicking Colin Kaepernick’s protest kneel is that he was just putting on battle gear…well, now you’re twisting reality. Because – go with me here – a cop is heading off to a protest so he takes his gear with him so that if shit starts to get tense, he can take a knee and put his gear on.

Yet, that’s the excuse I’ve seen from the left when confronted with photos like that.

And now we’ve got this guy saying the National Guard has been activated to exterminate protestors.

So, yeah, things like ACAB bother me. Mainly because they are gateway lies. Propaganda that sounds flashy and gets hearts racing and righteous blood pumping fervently.

But do you need that when you’re right?

I think not, and now we’ve abdicated the moral high ground by lying.

For my part, after watching the video I reiterated my point about having permits to protest legally, that I was glad no one was injured in the video – and most proud to see a protester shout a fellow protestors down after he climbed up on a fence around our Justice Center and threw his sign at the cops inside the perimeter.

“This is a peaceful protest!” he yelled.

I just dare the left and Black community allies to keep it an honest protest, too. 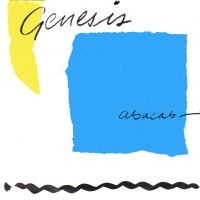