You’d think I’d know a good sign or minor omen when I saw one.

Not this guy, nope.

When I woke up at 3 AM in a manner that caused Myrtle to not just jump off the bed, but land outside the bedroom…that’s not a sign, right?

That the cause of my sudden consciousness was that I’d dreamed I had been bitten by a snake while sleeping in my actual bed wasn’t a symbol, right?

In the dream, the snake had latched onto the outside/pinky edge of my hand and was not letting go. It was also making eye contact with me in my dream whilst doing so. After what seemed like a minute in my dream, I reacted…by shaking my hand until the snake was flung clear of the bed.

Or so I thought.

But I was distracted from checking by Myrtle crash landing in the living room, so I forgot about the snake as my brain woke up.

I called out for Myrtle as I realized my hand still ached where the dream snake had bitten me and wondered if Myrtle had been the actual perpetrator. That would explain why she wasn’t answering my call – like she ever does.

Then I felt something scrabble up my neck and into my hair. I shook my head and loosely ran a hand through it to free it of any critters that had become entangled in my mane.

Realizing my error, I jumped out of bed, flipped on the light and then flung back the sheets in search of any blood sucking little predators.

Heart pounding and semi wide awake, I turned to go to the bathroom. And then a snake…of hair flipped forward on my face.

Now, wide awake and fortunately still needing to use the bathroom, I answered nature’s call. I tried unsuccessfully to calm my nerves while washing my hands, examining the one for what I hoped would remain phantom injuries as I did so.

Failing at a return to normal breathing, I stopped at the freezer on my way back to bed and took a shot of ice cold tequila right out of the bottle.

After a little tossing, I hear Myrt looking for a new place to sleep. She’s trying to open the drawers on my dresser to nest for the night. When I finally grow too frustrated listening to her to focus on my own sleep, I get up and shoo her under the bed.

She’d succeeded in opening two of the eight drawers, but she’s happiest in the third tier, explaining why she hadn’t gone silent.

But as long as I was up…I fed Myrtle her breakfast so she wouldn’t wake me too early.

And took a second shot, to be sure I’d not be awake too early.

I woke at 8, thinking I’d like to sleep more, but knowing the daylight would fight me. Hardly a surprise, given the dawn I saw breaking through the windows when I fed Myrt.

So, I got up. Only to be rewarded by this. 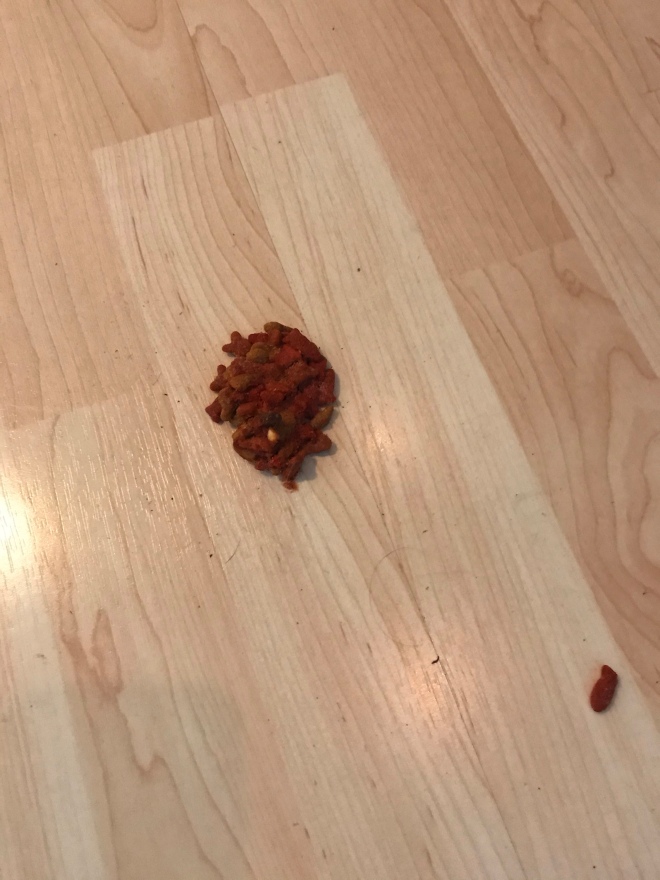 I hate that cat.

Sometimes…I swear I added that in my mind as I typed.

Seriously, I know dinner was late because I didn’t get home til 8 from mom and dad’s…but it was Father’s Day! Cut me some slack. You’re really gonna eat breakfast when you aren’t hungry just because I put it out? And then puke it up while I sleep?!?

What a loathsome creature.

I clean up Myrtle’s un-eating and brush my teeth. Rib had been texting me about a cappuccino machine he thought he’d talk his hubby into getting – the exact machine he already has, but with an integrated milk frother, which is so him – so I was painfully aware of my lack of coffee or energy drinks in the house. Throwing on a hat and sneakers, I’m off because obviously, a trip to Nossa Familia was in order. 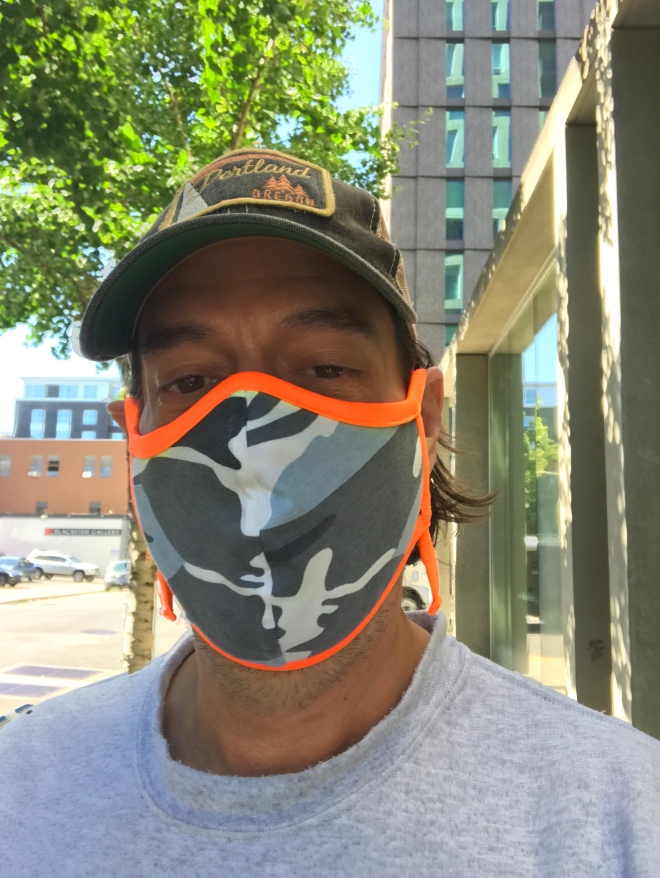 You can barely tell I’ve had a rough night and soon to be rougher morning. I arrive on the sidewalk to this. 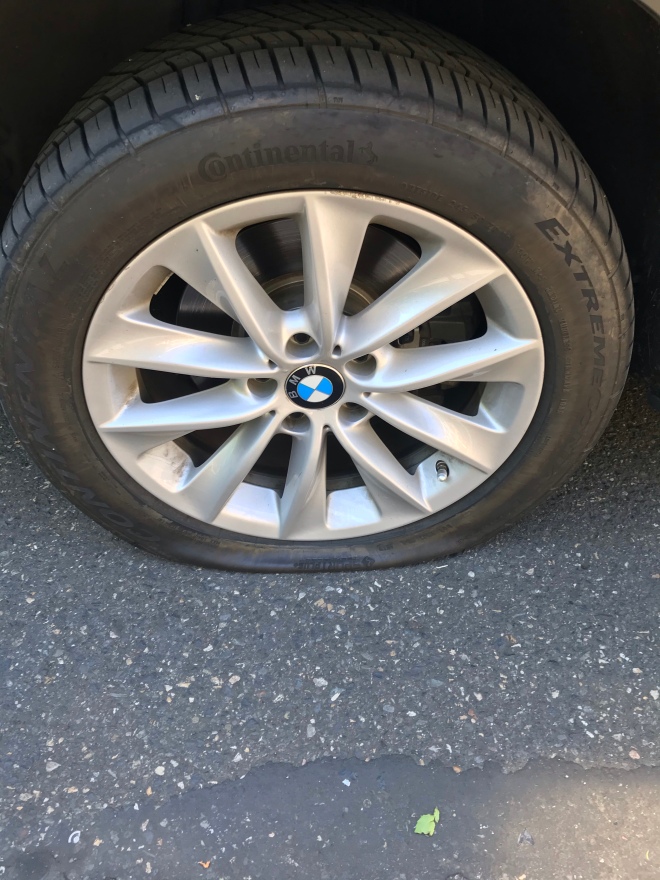 Just come the fuck on.

I’ve had these tires about a month.

Luckily, I wasn’t planning on driving. I stomp to the cafe, telling Rib I had dibs on their old machine as I went along. When I arrive, I order and the barista asked if I want to use my free drink that I always forget about.

If Monday has it in for me, at least I can try to get in good with Karma by tipping well. 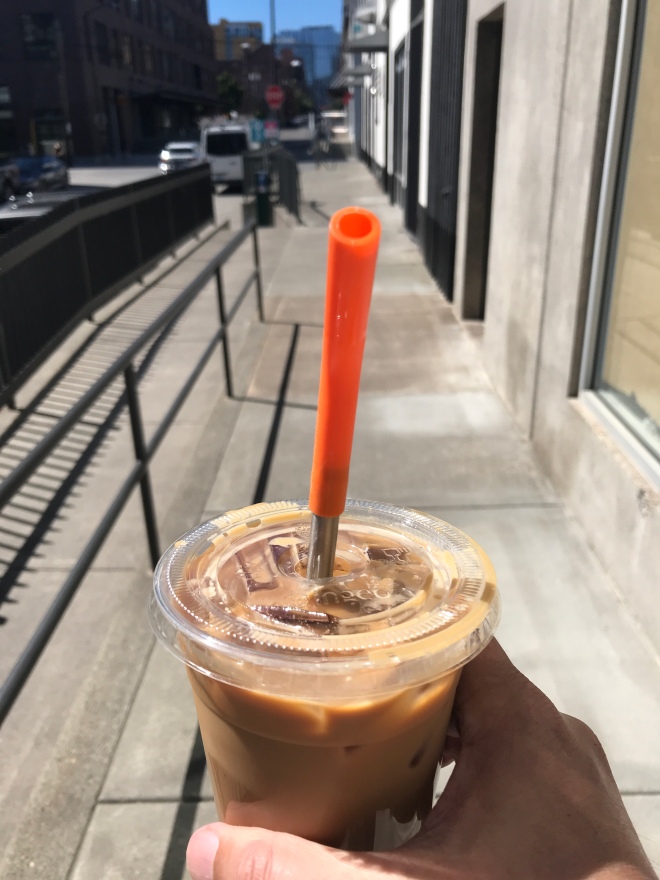 I go back home, water the Silver Fox’s plants, grab his mail and then steal his Dyson handheld to go vacuum my car while I try out the compressor that came as a GWP with Angela.

Worked like a charm – only took about 5 minutes, too! Now to shower and run up to Les Schwab to see if they can patch up or replace the tire they sold me. Hopefully, they can resist the urge to tell me I should replace all 4 tires again – which I fell for last time. Since these have less than 4K miles on them, hopefully my x-drive suspension won’t notice that one tire has 0 miles on it.

So, how is your Monday treating you?