Seriously, last week was quite a year.

I inadvertently offended my sister on social media.

Black Sheep Bro persisted in his attempts to have a conversation at me about why I should gratefully accept his return to the family dynamic. Reinforcing why I’d rather he leave me out of his notion of family.

Perhaps you’ve read something about Trunt treating Portland like his personal Operation Urgent Fury resulting more in Pinochet-esque kidnappings than anything resembling quelling the city’s outcry for justice.

The hits just kept on coming.

It was a tough week – I actually put myself in FaceBook Jail for a couple days just to slow the swirl.

On top of that, multiple folks reached out to me – either checking in or chiding – because I hadn’t been posting entries on my blog.

But instead of rehashing the long, I thought I’d recap the strange of the last week. Something lighthearted – just what Doctor Galby ordered.

After another round of self isolating, I went back to my Lyft driving last week. Probably another reason recent days had begun to feel so long and unending – not much company compared to when I drive folks around, chatting their ears off.

For my efforts, I was rewarded with both mask acne on the bridge of my nose and something like a pimple or a cyst or simply ridiculously painful in my ear pit where the upper strap of my mask looped over the top of my ear. Luckily, that second petty trauma is now just a bunch of dry skin working its way off my body. That mask acne, though…the outbreak on the bridge of my nose may be gone, but my swampy complexion lingers on.

I’m not kidding – that mask has been like a sauna for my face. And it just wicks from under my mask, too, crawling up my face until even my forehead is a thick, greasy mess.

“Hello, Puberty? Yes, I’d like to return this skin, please.”

For whatever reason, there were two consecutive days during my isolation that I woke up at around 4 AM and struggled to get back to sleep. Even though I proactively fed Myrtle breakfast so she wouldn’t go unattended to, she’d still come into the bedroom with some sad little “meows” around 9. Since she didn’t need anything, I chose to interpret her vocalizations as concern.

On the second day, unsure whether I’d fallen back to sleep or not and not wanting to look at my phone and risk waking my eyes up, I rolled the other way, toward the window. I pushed an eye out from under my pillow – me sleeping is quite a graceful picture – and squinted one eye open to see if there was daylight coming through the edges of my blinds.

No sun, just one of Myrtle’s big, green eyeballs. I screamed. I think I involuntarily jerked so hard (not like that, Diezel) that I pulled a muscle (also, not that one, Diezel!).

For her part, Myrt didn’t run and scurry for the underside of the bed or the living room, like she usually does when she gets startled. She just looked at me with those soulless cat eyes like she was willing me to get out of bed so she could have my warm spot.

I need to get her a heating pad…

But I got her back a few days later.

I may have friendly-fired myself with a Dutch Oven a couple times the other night.

I didn’t even eat anything weird, so no idea where my bedtime Chernobyl came from. All I do know is that when I looked around, thinking something along the lines of, “That’s for scaring the shit out of me the other day”…no Myrtle.

But after a week-ish that was like an emotional finger trap, I’m glad I could at least still find joy in my own weird awkwardness. I decided to take it easy today. Well, I was hoping to get in a bike ride or urban hike before my Virtual Happy Hour with mom and dad – shit I gotta go get something to drink, the company may be virtual, but the liquor will not be! – at 4. Strangely, I woke up famished. After pulling myself together, I set off for my new favorite food cart for an early lunch.

What followed ended up being a nice workaround to not exercising because I was hungry.

Not bad, considering my day was turning into one of these… 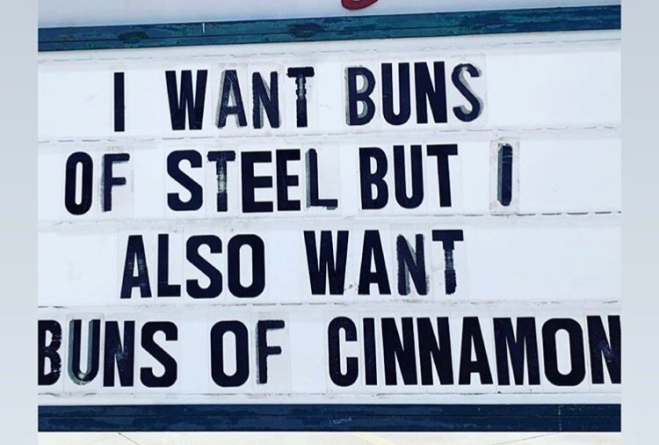 It’s only a quarter mile to the cart, but the other mile and a half was me mincing around from pod to pod searching for inspiration. I ended up at Charlie’s Deli getting what I think is the best sandwich in Portland: their pastrami on rye, extra mustard.

And, more bright side – I didn’t even get disappeared while out walking by myself.

Enjoy your weekend, everyone, and don’t forget…Fuck Trump!

9 thoughts on “What A Long, Strange Week It’s Been…”