These days, not a lot gives me hope. Not for Amerikkka, at any rate.

It’s like these Stupid Americans are just one big chorus in the sad but obvious sequel to the play Hamilton. Running around stage singing

<whips out concealed carry pistol and brandishes it wildly>

But now and then, something gives me a glimmer of hope. Even if that hope isn’t borne out, maybe it’s a clue as to where the train carrying the so-called American Dream went off its tracks. 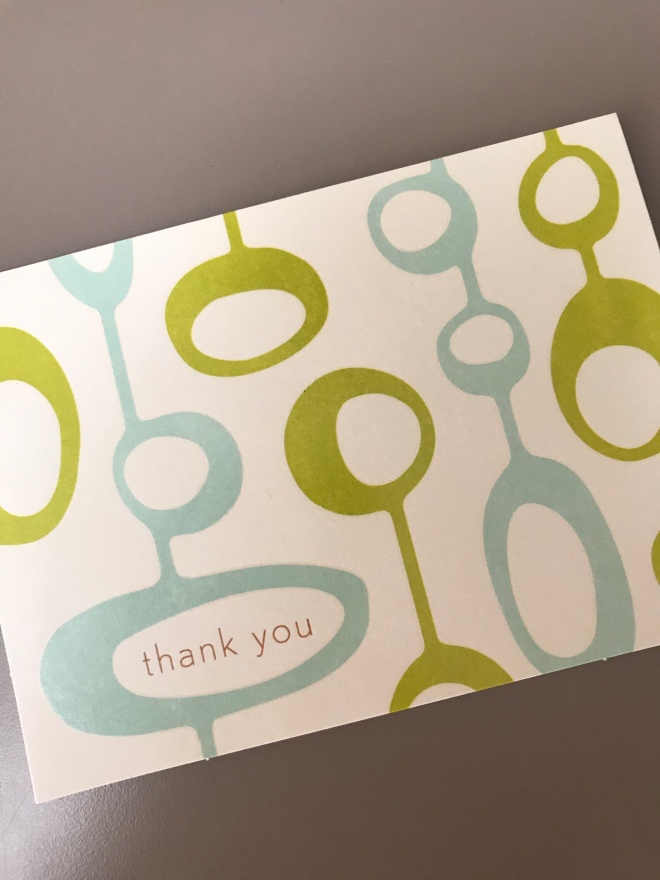 My ‘Phew turned 21 over the weekend. I didn’t attend the festivities over in Central Oregon because I view gatherings of size or geographic diversity as Boomer Doomers and I’m fucking close enough to that demographic to take it seriously.

So I sent a card.

Here it is, the Tuesday following and I find this card in my mailbox.

A Thank You card.

How anachronistic in 2020 America.

A newly minted 21 year old sending a return Thank You card within days of his birthday. I kinda suck, having taken too many shots of apathy during college, so I sent his birthday card on Friday, not completely certain that it would make it across the state before his actual birthday.

I know it at least made it there by a Monday, because my parents (true Boomers, and either far braver or fully under the sway of grandparentitis) mentioned it on their return home on Tuesday. Then, when I check my mail on Wednesday, I find the card.

That’s a pretty impressive turnaround, both for a 21 year old with other pressing issues on his newly and fully legal mind and the embattled USPS.

I fully credit my sister.

Not simply because I got this card, but because there have been others over the years. Enough so that it’s apparently a habit custom for the ‘Phew.

And that’s the result of what I think is missing in America today.

Lest you call me the Voice of Treason prematurely, remember, my claim on that moniker goes back waaaay further than last weekend. And I’m not looking to force and McMaster wannabes into the unemployment system or say that hands on parenting is the solution to our country’s problems (but probably it is), because, let’s face it, I don’t think the Menendez bros’ mom was giving her fingers the 9-5 treatment…but it worked pretty well for me and my sibs.

Keep in mind, one of said sibs went on to raise my ‘Phew.

And my sister and brother-in-(literally)law made the decision for my sister to stay home to raise my ‘Phew after he was born. He and my sibs are the only exhibit I would offer into evidence as proof that stay at home and hands on parenting produces better people.

On the other hand: most of the rest of America.

Again, let my lovely assistant, Yoda, encourage you to do the math there.

Oh my gawd. Just as I’m typing this out, I’m thinking of the difference between my nephew and Kardashians Americans. The most telling story I can come up with is the time I was visiting my sister and asked how the ‘Phew was. She told me he was good, they’d been working on a big test that he had that day.

A few whiles later, my nephew walks in, and without saying “Hi” to anyone, walks across the kitchen – because we’re family and that’s where we hang out – and hands my sister his cell phone before going up to his room.

When asked – incredulously – about it, my sister just says, something like

The test must not have gone well, and he knows that if he doesn’t do well in school then he doesn’t get distractions like his phone.

My sister and BiL raised an American that understands both cause and effect and consequences.

It’s not my particular horn to blow, but I’m sure my sister wouldn’t mind me giving hers a toot. Raising someone who can maturely face consequences like that is no accident. And I know my nephew wasn’t always a dream child, but he can send a damn thank you card, and that’s not nothing.

Imagine if we lived in a country where more individuals were both able to make the stay at home decision, but fulfilled enough by doing so that we ended up with more folks like my ‘Phew and fewer Proud Boys.

That would be a country of which to be proud. How do we make that happen?