Do you ever start telling a story about “the old days” or “a classic” movie/song/what-have-you only to have your brain catch up with your mouth halfway through and realize the story you’re nostalgically telling doesn’t pass current PC muster?

Of course this happened to me.

So, I suppose this should be titled “That awkward moment when”…

There I was, at Nossa – hey, it’s Sunday…it’s what I do. Anyway, I was talking to my barista boyfriend while he made my drink and the Silver Fox found the perfect table – y’know, one that looks perfect but spills my drink when he innocently adjusts his foot. Our conversation started after The Fox asked if the tables outside were reserved for the brunch the bar downstairs hosts on the patio on Sundays.

It’s a shared space, so sit wherever you want!

I heard a chipper and enthusiastic statement but his body language had an edge to it, so naturally that was the conversational thread I chose to pull. I commented that they sure put a lot of effort into their brunch service, since they start serving at 10 and I’d been there at 8 before to see them beginning their set up.

Yeah, they don’t even open the downstairs space, they just use the patio until their regular hours.

That was kind of surprising, since Portland weather is kind of…unreliable. But on top of two-plus hours of four people setting up the patio – which I assume is mirrored on the back end for clean up – with a bar cart, racks of tableware staged at the edge of the building and a music set up – which is usually a live band; they are spending money on extras as well.

But they are either buying extra pub height tables and chairs to supplement the regular patio furnishing the landlord provides or they are emptying out the bar below to provide seating. On top of that, Nossa has a couple of umbrellas they usually put out to shade the tables – I think there’s eight tables normally. The first time I witnessed this brunch endeavor, the restaurant added in some orange umbrellas. Today, the umbrellas were all a nice, dark green. No red Nossa umbrellas in the mix at all.

I don’t mind, really. It brings people in…

“Yeah, but with those green umbrellas, you’re probably gonna end up with not just your customers or their customers…you’ll probably get some Starbucks customers coming in to add a really confusing third leg to your customer barstool.”

“Oh, really…you think you can rehabilitate Starbucks customer’s palates with your good coffee?”

He looks like he makes a real effort at thinking about it for a second, then says,

Well, maybe some of them…

We both laugh at that and that’s when it happened. I was thinking about that aha moment of a Starbucks drinker experiencing good coffee and instantly questioning their previous life choices. 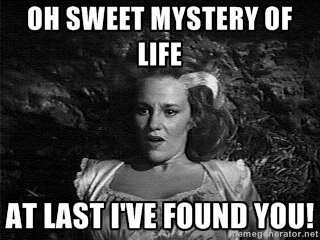 That was the scene that popped into my crazy head, which made me laugh even harder. I asked my Fake Boyfriend if he’d ever seen Young Frankenstein.

I think I watched it a couple of years ago at my parents’ place one Christmas.

“Of course. It’s the perfect holiday movie! Do you remember when Madeline Kahn meets The Monster?”

So, naturally I go on to describe the scene and he’s giving me, “Yeah. Yeah!” as he listens along and remembers.

Except as I’m talking, I’m starting to remember this part of the scene

Where The Monster kidnaps Madeline and how the whole “Sweet mystery of life” moment occurs while The Monster is forcing himself on her.

I’m beginning to simultaneously try and gauge the people standing nearby – because were in Portland, for crying out loud…the wrong combo of AntiFa and Feminista overhearing this could get me in real trouble – and figure out how to get out of this conversation.

And then a third thing happened.

This was the part that did it… 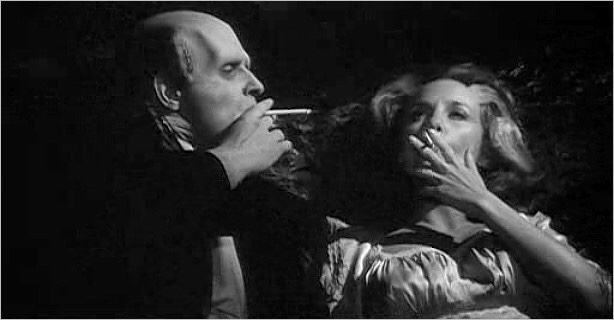 I was suddenly disgusted with the notion of framing a rape as the woman being wrong about what she wanted and coming out the other side of her assault fulfilled and awakened.

So, I’ve been running a B-reel argument about how “times have changed” and “it’s a comedy” with myself to help figure out whether my nostalgic feelings about this movie can survive in this woke #MeToo day and age. I told myself,

Nope. Can’t fall for that argument. I’m not planning on running for office, but still…can’t have Jeff Bezos tattling on me if he sees Young Frankenstein in my viewed queue.

Now I’ve given myself a headache.

No, this is not some pathetic attempt by a man to steal the thunder of this important women’s movement.  I’ve had bullshit to deal with in my life and I don’t intend to rehash it as a way of validating my hardships by pitching in to bask in the attention of another person’s suffering.

If anything, I’d be betting that I come off as a mansplainer for even trying to express my thoughts on the issue.

Because I’m kind of a jerk and a little bit of an idiot.

But here’s the deal:

I’m pretty annoyed that the Pussburglar is still president.  Check that, I’m annoyed he ever became president.  I don’t understand the women that openly voted for him.

Some sort of twisted sense of Stockholm Syndrome comes to mind.  Because I like to be able to name things and understand them…and a woman voting for that man child defies explanation and reason.

Actually, it’s like treason to their gender.  The punishment for that is something we all must suffer.

But past that, my thoughts are pretty much, go get ‘em, ladies.

Seriously, I’m more excited about Big Entertainment paying for the unrealistic definition of feminine beauty and desirability they have created.  To quote – well, paraphrase, really – the prophet Billy Joel, they didn’t start the fire.  But they have been pouring gasoline on it since the 1920s.

Let’s face it, sexism and sexual assault have been around for millennia, but I’m pretty sure a certain good book mandating (go ahead, take issue with that word) that a woman submit to her husband tacitly condones rape and domestic abuse.  What’s the penalty for defying ones biblical husband?

That sounds right (wrong), but I could be confusing it with just stoning whores.

But outside of that, entertainment and the industries that support it – fashion, cosmetics, et al – have been largely dominated by men.  So, it wasn’t women who were pitching ideas for girdles as a foundational garment or subordinate roles like the scantily clad Jeannie who was lost without her Master or submissive Asian housekeeper on The Courtship Of Eddie’s Father.

Yeah, no.  Those were the ideas of men trying to create – sorry, re-create – women in the images and roles that fueled their desires and bolstered their collective ego.

While I’d welcome a more global comeuppance, I’ll take a gender reboot in the industry that has made this issue exponentially worse over the last five decades.

Maybe next we can come up with a movement to crash through the celluloid closet doors.

The one industry where I think women have had and exploited a chance at turning the tables on the patriarchy was in print media, both newspaper and magazine.  Magazines in particular.  Publishers knew where to pander to the gender.

And then:  Anna Wintour.

Don’t even get me started on Katherine Graham,

I imagine this all started out as a stunt to drive sales and get men to buy subscriptions for their little ladies at home.

I could for sure be wrong.

I just think I’m on the right thought trajectory…

But I love that that maybe scenario snowballed – ok, I know that term implies a speed that was not a reality – into a situation that some savvy women were able to exploit and make way for the Graham and the Wintour types to climb to the top of the sexist pig pile that is basically industry in America.

My one knowingly dangerous thought here – all other thoughts that end up dangerous are the product of my middle aged white man cluelessness:

People coming forward after the fact…surely they weren’t so much afraid as tolerating it?﻿

Not all of them, anyway.

How do we filter?

Is it right to assume guilt so long after the fact?

It’s particularly hard – and conflicting! – when the accused run through public, private and ultimately even government sectors.

When it comes to the private sector, I’m glad to see companies, major corporations, acting swiftly and executing administrative policy based on their published codes of conduct and not acting in the best interest of their dividends.

I have been on the wrong side of a harassment situation that was dispatched according to what was convenient versus congruent with policy.  A little personal bias there, my blog…cope.

Hopefully this #metoo moment is the point where we learn that ratings and sales take a back seat to actions and responsibility.

I gotta tell ya, I wish it were the same, but I don’t think it is.

Imagine, just like ratings and sales taking a back seat to actions and responsibility…can you picture an American political landscape where more of our elected officials did what was right instead of what was in the best interest of their own re-election campaigns or the big business that supports them.

That’s not the reality.

And on the eve of one – the first? – Democratic Senator to be caught up in all of this likely resigning his office, I have to ask: Politics being a vicious partisan beast, do we leave this to the press and public opinion to decide or do we accept the slow moving internal ethics machinery to do its job and accept the outcome?

And, surely we can entertain a comparison to what’s been happening in Big Entertainment as a reasonable expectation for how sexual assault should be adjudicated in government.

Was some mid-level manager at the Weinstein Company administering as much quid pro quo on the side as he could?  Probably,

Is that what made headlines?

It was Harvey.  The head honcho that started us off here back in October.

So, with all due respect, Schumer and ladies of the Senate…it seems ass-backward for you to not only eschew your own “company” protocols in calling for Senator Franken’s resignation…it’s downright hypocritical that you would hold him to a higher standard than his “boss”, President Pussburglar.

And, if in any way this didn’t come off as mansplaining or somehow ignorant, hooray!  But don’t worry, I still expect a fair amount of women to glare at me if I do something courteous for them.  I know that’s on them, not me.