Well, the part my dealership ordered for Door Seal Repair: Part Duex should have arrived either Friday or Saturday – depending on when the clock starts on “two days to arrive”. I thought it wise to just check in on Saturday and get an update.

Mind you, this communication is all done through a text messaging system, so it’s not like I’m making them drop what they’re doing to answer my inquiry. Rest assured, this text message system has not impaired my ability to scream bloody murder at them for their continued successes in fucking up an attempts to fuck me over.

Sure, maybe my service tech is off on Saturdays, but you’d think someone would check messages…

Well, I would think that. Me and my uncommon knowledge.

Then on Sunday, I get a text reminding me of my drop off the following morning. 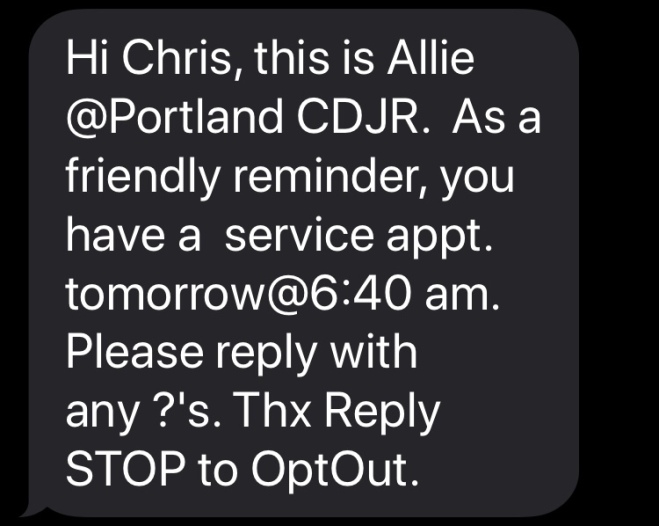 I mean, A) no one told poor Allie that my car was already onsite, but what’s good communication gonna do for an outfit, anyway? And, B) my appointment was for 7:00, which I thought was when they arrived/opened. Given my myriad experience with these folks, I also know that these appointment slots are rather informal. Last time I dropped my car off – maybe…three weeks ago, now? – my service tech was surprised to see me and when I mentioned that I thought there would be a bigger crowd, he kind of poo-poo-ed the overall effectiveness of the whole appointment notion.

But, since I did have questions…

My car is already there, since it was not usable for work, a dropped it off early. A part was ordered, with a two day delivery, and should be there by now.

Can you confirm it is? If so, I should be picking it up tomorrow. If not, I’ll still need a loaner until it’s done. But I’d rather not get up at 6 to get it. Could it be held until later in the day?

I know, I know…I didn’t proofread my text. But, it turns out that my typos will only be seen by you since the only follow up I’ve gotten to those questions was this:

Anyway, my tech – Joseph – texts me back this morning in response to my Saturday message with this BS… 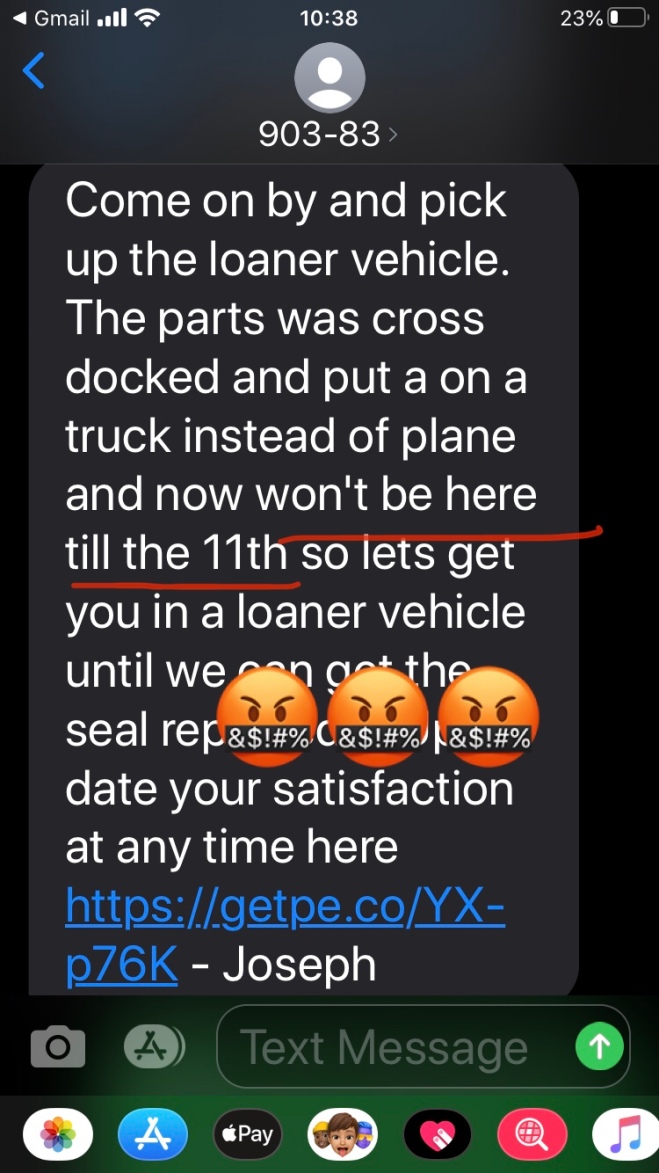 So I tell him that I’ll be in around lunchtime to pick up my loaner. At about 12:30, I set out on foot to the dealership which is only about a mile and a half away.

At least it’s a beautiful day!

To quote the prophet Kathy Griffin

They decided to comp me a rental from Enterprise, telling me that they would pick me up in 5 minutes.

Well, the wait was longer than my walk to the dealership took, so either I walk really fast or these guys are less tight with honesty than the GOP.

Back to that whole “good communication” thing, when I finally got to the Enterprise place, I got charged a “Totally refundable $50 deposit” to which I replied,

Well, if it’s as totally refundable as my comped rental from the dealership, I see a good deal of hassle in my future.

Nonetheless, here’s the new ride at least through next Monday.

There was a BMW and Porsche SUV on the lot and I – totally jokingly – asked if I couldn’t have one of those. The rental guy replied, totally serious, “Sure, although that would probably run you a little out of pocket!”

My annoyance – I’m oddly kind of over the ~$900 bucks I could have made driving during Pat’s most recent spa visit – is that somehow the logic of spending $385 to rent me a car for seven days is superior to just getting another damn door seal on a plane that would get here in two days.

I’m not surprised these jokers didn’t think of that – I’m surprised they are both employed and still in business.