So, I’m sitting here at Big Legrowlski – alone, again…naturally – trying to figure out how to make a story on the Instagram. Well, making a story in and of itself isn’t terribly difficult. It’s the extras: adding additional pics to it and enhancing it with text…oy.

It’s one of many situations that make me scream – sometimes in my head, sometimes in real, live technicolor – “I need a twenty-something!

Notice that I didn’t say “one of many recent situations”…gentle readers, this has been going on since I exited my own 20s.

Mind you, I’ve only vomited out about 5000 words into the WordPress Abyss today, why not keep going. FYI, that’s a lot of words and there was plenty of emotional heavy lifting between brain and keyboard…so, yeah. A little millennial vs old timer levity was required!

This phenomenon I mention…it is not one that I alone seem to struggle with, either. Witness this random post from a friend on the Facebook. 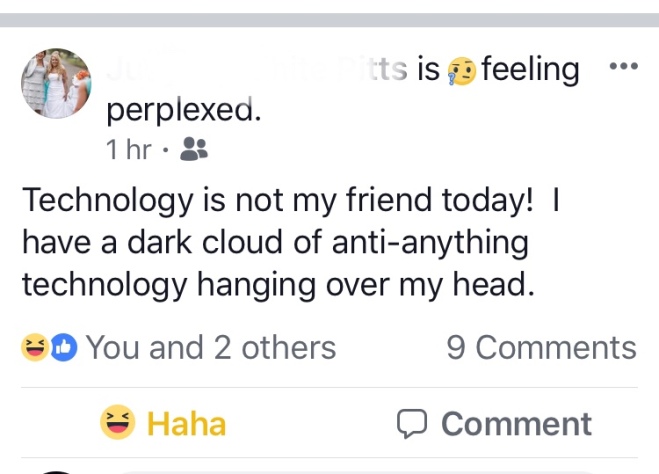 Not that I don’t enjoy my friends’ equal discomfiture, here in the techno-wilderness.

On the flip side, it’s nice to encounter situations that let you know that – somehow – it goes both ways. 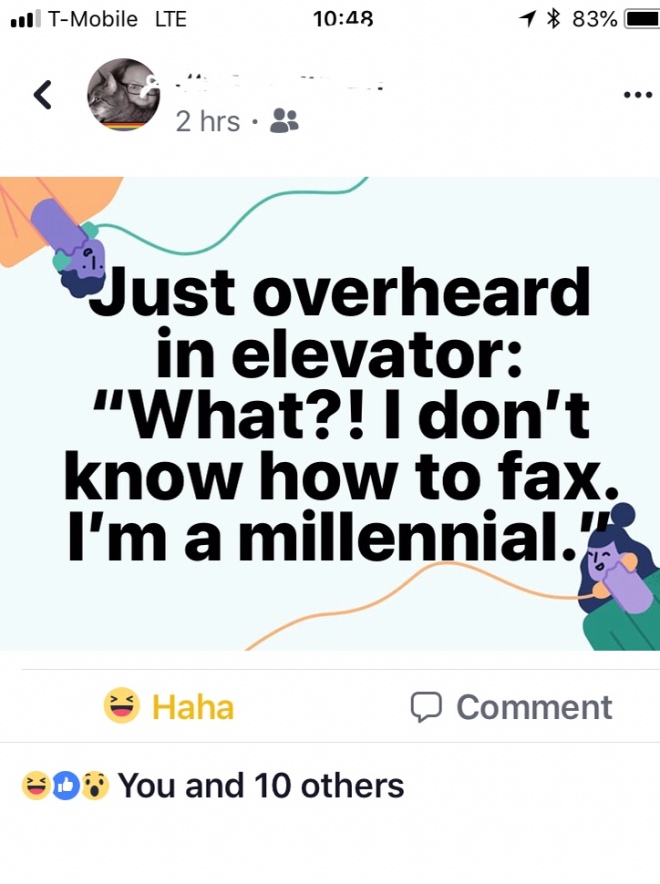 Surrealiously…it takes 5 million years to make a goddamn rock. You’re only a millennial so where’s the disconnect? Sending a FAX should still be current events.

So, between those two generational extremes…what is it that I’m learning today, exactly?

Jesus, not to get myself into any situation that somehow evolves into me brokering peace in the Middle East, but I’ve learned today that this isn’t just a grumpy old Xtopher peccadillo, this tech frustration.

It really does go both ways.

Here I am, the perfect example of that statement: sometimes screaming to be helped by an assuredly more tech-comfortable younger person, other times the actual younger person being asked to help the Silver Fox figure out why his phone shows a music app running on his phone that he swears he’s never installed.

I’ve learned that, regardless of one’s chronological accomplishments on this galactic rock, technology is the great leveling device. You might think you’ve got your shit dialed in and your figurative water fowl aligned…you just haven’t met your technological undoing yet.

It might be the next it app that proves a boondoggle for your supposed savviness. Then again, it could be the old school alarm system at your kids’ house that keeps you huddled on their porch in a rainstorm as you wait for them after failing to gain entry, defeated by a keypad and four-digit passcode.

One never knows, do one?

In an abundance of flip sides leading up to this entry, I’ve also learned not to downplay expertise from surprising resources. I have this blog-buddy, Phil, that read of one of my storage issues with Apple.

Having grown weary of their too-frequent “Storage Almost Full” push notifications that really seemed to just be a squeeze play for an extra $.99/month from poor old Xtopher, I tossed off a whiny blog post.

What does the universe provide me in return?

A recommendation from Phil in my comments that I simply get a flash drive, onto which I could save my photos, music and anything else that congests my cloud storage situation. That would leave my cloud space free for apps and other shit…shit literally being “I don’t know what”.

Phil and I have bonded over many things: humor, beer storage, saddle rash. We’ve clashed over more important, serious issues along the lines of writing – in a strictly helpful, mentor-y manner. We’re not arguing Oxford Comma here, folks.

Phil is a grandparent.

Setting aside the reality that I could be, too, in a bizarrely alternate reality, Phil has subtly led me to believe that he’s got a few more laps around the sun than I have managed.

And here he is throwing me tech pro tips.

I’m sitting on my couch, reading this comment of his and resisting the urge to look over my shoulder at the Apple G4 Tower that I’ve had since the early aughts that has all of my music stored on it – stuff I transferred from CD into the drive after getting tired of dusting my CD cases.

A drive I moved from Portland to Seattle and back again – five households in all – to preserve my music library.

“Oh…just get an external drive?” – Me