Maybe this isn’t a Today I Learned so much as it is a Today I Figured Something Out. Yet another thing you old bastards have been keeping from me!

Y’know, those little a-ha! moments. They really are fewer and further between than I’d have figured as a know-it-all kid. As a matter of fact, surrounded as I find myself by such stupid Americans, I’m surprised that there isn’t much more fanfare when it does happen.

Note to self: throw mental parade next time this happens, you earned it.

Like that time I finally got why it’s called a blow job. I’d simply been looking at it from the wrong <ahem> perspective.

Those types of a-ha moments. Or in that particular case, “ah-ah-aaaahhh-ha” moments.

Well, today…there I was, underthinking things when another one* hit me.

When I’m in a funk and spiraling downward, my older and wiser (just ask them, they’ll tell you) friends will tell me

It’s not that bad!

and I’ve always considered those to be words of encouragement. But as another deluge of Headlines-turned-Cautionary-Tales washed over me this morning, it hit me.

They must surely have been silently adding a word in order to not give away the surprise.

It’s funny, too. As I’ve been aging – involuntarily, obviously – I’ve found myself warning younger people. When they say something that I know (now) to be naive, I’ll whisper conspiratorially

Listen, I don’t want to ruin the surprise, but…

I figure it’s safe, knowing that they likely stopped listening to me when I said the word “listen”, because what could I possibly know, right?

On the other hand, sometimes I like to co-opt my old frenemy Dan Savage’s lil chestnut of wisdom and just push people down a little harder when they say something naive

I really like that one, since I think I mentioned people don’t really listen anyway. I just get my lil chuckle either way. Either because I can tell they didn’t listen and heard what they assumed they would hear or they did hear and…that look!

I don’t give away the surprise. I just leave the warning hanging there, sagely. However, when it finally does happen, I then get to say

Don’t say I didn’t warn ya

I’m just kidding. I don’t really do that.

Oops. Look at me…leaving words out, just like the grumpy old man that I am.

That should have said

I do say those things, but just for fun.

But since I’m old people humor me because I might be dangerous, we all get a good – if not awkward – chuckle.

The reality is that I turn my hyperbole on myself.

In the last couple weeks, a couple of my original blog buddies have poked their cute little heads back into the WordPress arena. It’s good to see old friends familiar avatars around this dusty old joint again.

In one of their returns – via comments on one of my blog posts and their blogosphere re-entry blog entry – we discussed the states of affair in his life.

Turns out he’s been having one lately. Or at least a low-key dating experience.

Put on his – and this turn of phrase of his made me jealous because it’s really funny – COVID-15. But it’s ok, he says, because his beau likes him just the way he is.

Luckily, it was imaginary puke.

Anyway, in one of those moments of self-directed wry hyperbole – dryperbole? Chrisism – I thought to myself

Yeah, yeah…we get it – you’ve got a boyfriend

in faux exasperation – because secretly I’m a big emotional schmuck and it makes me happy when people begin relating.

I said to myself.

I said, mentally touching my pearls.

I like to keep these things to myself when I like a boy. I find that as soon as someone finds out they’re my boyfriend – pffft! – they’re gone.

Meh, wudyagundo – in my head I’m both my worst enemy and my best audience. It’s a bit crowded up there.

But I get a good chuckle out of that.

Anyway, if you ever find me letting hyperbole that you think should probably be silent out for a stroll, don’t be offended…try and enjoy it.

Because it’s probably gonna end up being right. 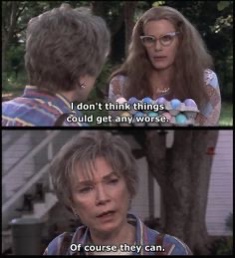 *I’d just like to clarify, the whole blow job a-ha moment was back before the turn of the century…not recently.