But, still…one (this one, anyway) does like setting and achieving goals. Especially if they are fun or don’t require too much work.

That said, my goals are a mixed bag of those two…adjectives? Qualities?

Nonetheless, here’s a brief accounting of the goings down to date:

1) After Chadwick Boseman died last summer – suddenly, to out of the loop fans – I started putting pressure on myself to get my mind sorted on the Coming of Age test that my doctor had been pestering me about for several years. It’s cute that he thought getting ahead of my fiftieth for the test would provide results. He plied me with mail in poo test kits on every visit for a couple years, trying to sell me on “new and improved” collection methods.

Bless his heart. He’d only known me a couple of years at the time and was unfamiliar with my stubbornness.

When T’Challa died, I finally pulled one out of mothballs my pile of unread mail and stabbed a floater before sending it in.

Of course, I failed.

Since it tests for trace blood and I have ROH (randomly occurring hemorrhoids), duh…blood.

When he calls me with the results, I’m talking to a doctor that finally knows me.

I’m going to write you a referral. When they call, *please* answer your phone.

I replied by asking how many years he’d been chasing me about fondling my feces, which amused me way more than him.

Anyway, my colonoscopy is the week after my birthday. AKA: at the end of this month.

2) At Christmas, after my mom unwrapped a bird feeder from her Secret Satan Santa, I remembered what I’d forgotten: I wanted a bird feeder for my Juliette balcony. Mom directed me to the shed, where there was a hummingbird feeder they had decommissioned some time ago that I was welcome to.

I’d posted about the minimal effort required to install it – basically a trip to the local hardware store.

Side Note: my local hardware store is the one that Anastasia Steele (what a douchey name, but what does one expect from such a masturbatory story?) worked at before becoming involved with the titular character in Fifty Shades of Grey.

Anyway…I finally got around to that. Now the waiting game begins. 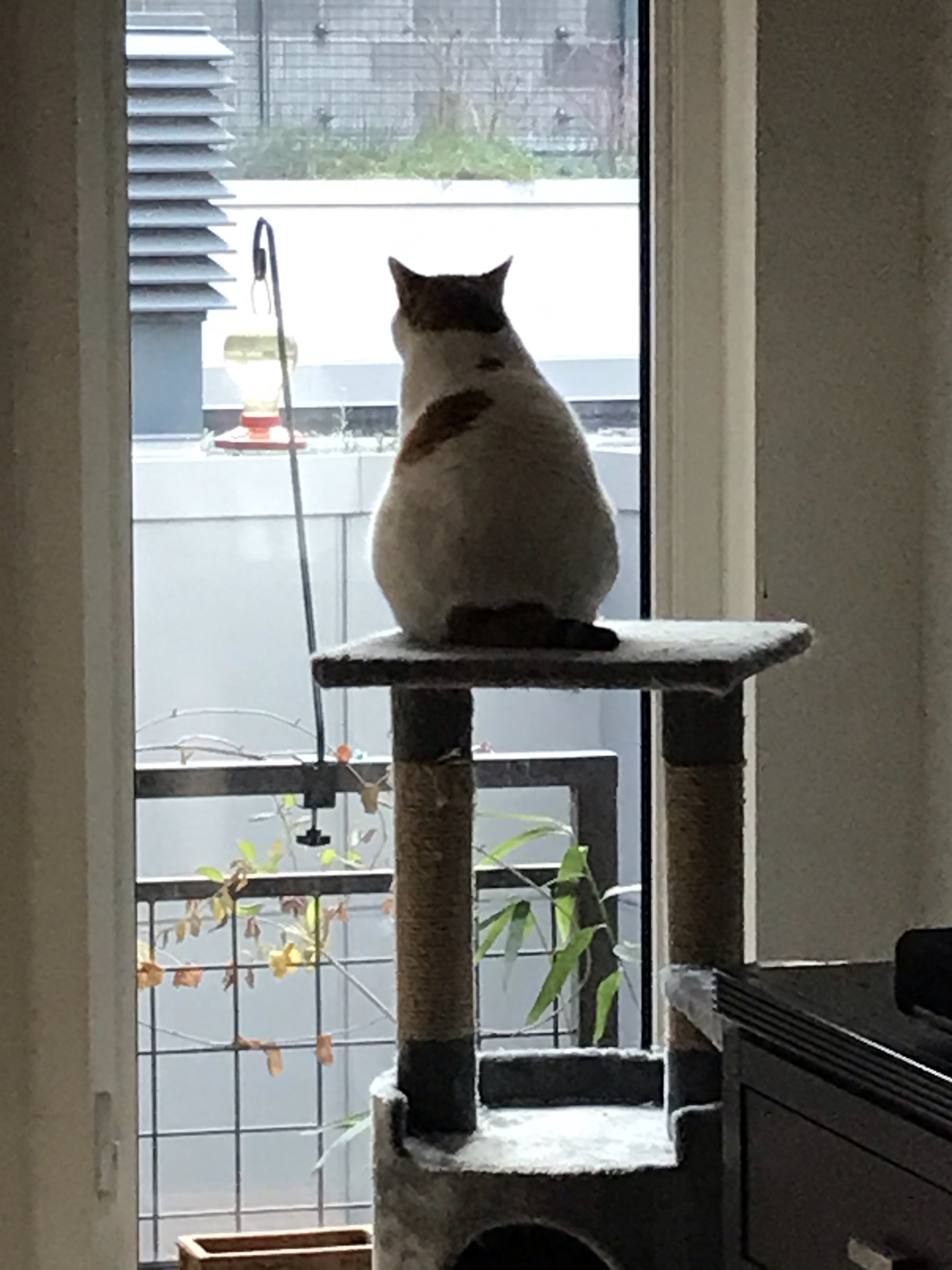 She’s a meany. But I’m sure she’s nice enough to invite any takers into her Red Room.

3) And no Resolution List would be complete without a diet or exercise entry.

Diet is not that entry. Although, after reading about the prep for the impending ol’ tooter rooter, I’ll consider that diet.

But I’d seen the latest greatest resolution challenge floating around on social media – something about 100 Days of Motion or some such nonesense. While I consider goals to be a great thing, realistic goals are the ones you attain.

Somehow, 100 Days of Motion for this old bag of bones didn’t seem likely. Unless, of course, one counts getting out of bed as a sit up, on to or off of the couch a squat or some similarly unlikely rationalization a success.

Nonetheless, I committed to being more active, minimum bar for success set at five days per week.

I started with three sets of weighted exercises at home – my only real option in Lockdown 2.0 – and had at it. Any movement feels good after months of rather unfocused but still highly effective neglect. So I was satisfied…and increasingly motivated through my own accomplishments.

Then I did a mile of stairs in my building.

It was the end of the second week – which seemed reasonable. But my body informed me otherwise.

I mean…it seemed so reasonable. Then I walked weird for a week. Nevermind the reality of wheezing my way up and down six flights of stairs dozens of times in a mask.

In a fit of frustration over my soreness and lack of saw ownership, which would provide me the ability to cut off my legs, I ordered an e-stim massage unit for a little relief…I hoped.

I have a friend – who I will allow to remain anonymous – that has one he uses for personal massages. That particular endorsement doing nothing but sending my nuts fully back into my torso whenever the topic comes up, I also had one from Bubble Boy.

Not that his was much better. He’d found playing the part of “cowboy” to my “bull” (Ha, I wish) taxing after falling asleep with his attached to his rear a couple of days before one of our assignations. Not that his rear needed a workout, but the results of his nap on a high setting gave me hope for a therapeutic result on a low setting.

It most certainly did the trick! Not bad for a $30 solution to my million dollar baby problem. Here’s a video of the above situation if you want to see ol’ Chicken Legs McGee twitch…

I’d also seen a former colleague hosting outdoor fitness classes, reminiscent of my uber-fit days in Seattle, when I’d wake up at the crack of dawn and go to a boot camp overlooking the Puget Sound and then grab a doughnut before 7.

Anyway, she was doing Saturday morning classes (at a non-crazy hour) for $10 and I thought maybe I should participate. I missed the first week, but the second week I took my Jabba-esque physique out for a trundle. Hell, for all I knew, it would kill me and spare me the colonoscopy.

And I should be back next week. I was gratified that my former colleague bemoaned being 43 as we caught up, trying to decide “how long it had been” while also laughing at how long it had been. That’s aging for ya, it’s kind of amazing. Additionally, with her being probably exactly middle-aged for a woman, that lent itself to the majority of the participants being only slightly younger than me. So I felt comfortable.

On the other hand, the single attendee who was young-young was someone I was fairly certain that I’d chatted with on asocial media several years back and maybe only unfollowed this past summer. It’s hard to tell with masks and all, but I recognized some thigh tattoos and distinctive guybrows.

I’m pretty sure he didn’t recognize me – or my less-than-impressive thunder. Because, of course the class I went to so that my clothes would fit better started off with midriff-baring downward facing dogs. While that’s a position I would enthusiastically put him into, no one needs to witness my shituation in that same posture.

All that said, the class was great – despite the humbling nature of the endeavor and one errand exertion related fart – and I will be back next week. And I can still walk, thanks to my e-stim buddy.

4) And I nearly forgot this one: I raised my weekly Lyft goal by 50%. When I’d originally set it, my goal was just to minimize street parking expenses, since I don’t have a garage. I usually made that goal, but now that I’m not doing any part-time office gigs, I’m on the street whenever I’m not driving for Lyft.

Honestly, I normally blew that goal away, but officially resetting my goal to the 50% increase was daunting.

So far, mixed results. I’m averaging my new goal over the first weeks of the new year, but I have only achieved the goal itself two out of three opportunities.

There still work to be done. And 49 chances for success!

So that’s what I’ve got going so far this year…I still have my new InstaPot as an open/unopened goal to tackle. I’m sure anyone who follows me on social media will be assaulted by result pics know as soon as I start executing on that goal. I’d like to put it into weekly use…it’s just finding those recipes that will produce leftovers I’ll actually eat or that can be cut into halves easily.

How are your resolutions going? Tell me in the comments…

5 thoughts on “I Am Unresolved”